Simone Biles took fans by surprise when she pulled out of the team finals at the Tokyo Olympics on July 27 after one of four rotations. The reason for her shocking withdrawal wasn’t physical, but instead, it was because she was feeling the pressure and emotional weight of being the “head star” of the Olympics, she later revealed. Biles stayed on the sidelines to cheer on her teammates in their remaining rotations after removing herself from the competition. Jordan Chiles subbed in and replaced Biles on the uneven bars and balance beam, helping lead the team to win a silver medal behind the Russian Olympic Committee, who won gold in this competition.

When asked about her decision to withdraw by the “Today Show’s” Hoda Kotb, Biles replied, “Physically, I feel good, I’m in shape. Emotionally, that kind of varies on the time and moment. Coming here to the Olympics and being the head star isn’t an easy feat, so we’re just trying to take it one day at a time and we’ll see.”

The four-time Olympic gold medalist qualified for all four events in the individual all-around, which she had won at the 2016 Olympics. And now, Biles has given an update on her participation in that event.

Simone Biles has dropped out of another Olympic event 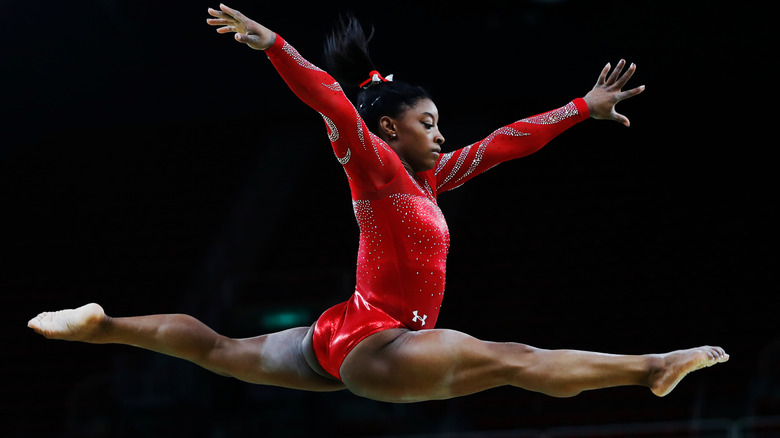 After Simone Biles’ shocking withdrawal from the team finals on July 27, she told reporters she’d be taking it day by day in terms of if she’ll compete in the other three events she qualified for. On July 28, news broke that Biles would not be defending her title in the final individual all-around competition set to take place on July 29.

USA Gymnastics said in a statement that Biles is determined to “focus on her mental health” and “Simone will continue to be evaluated daily to determine whether or not to participate in next week’s individual event finals,” per the New York Post.

Jade Carey, who did not initially qualify for this event, will replace Simone Biles in the competition. USA Gymnastics stated they stand in solidarity with Biles’ decision to prioritize her mental well-being, noting they “applaud her bravery in prioritizing her well-being. Her courage shows, yet again, why she is a role model for so many,” per the New York Post.

Biles also has a supportive network back home. Fellow gymnast and “Final Five” team member Aly Raisman praised Biles for her choice and also said she was thinking of her. “She is human, and I think sometimes people forget that,” Raisman told the “Today Show.” Biles’ boyfriend, Jonathan Owens, also commented on a photo she posted of the team with their silver medals. “So proud of y’all,” he wrote, per Page Six.

If you or someone you know is struggling with mental health, please contact the Crisis Text Line by texting HOME to 741741, call the National Alliance on Mental Illness helpline at 1-800-950-NAMI (6264), or visit the National Institute of Mental Health website.