President Joe Biden left the G-7 Summit in Cornwall on June 13 to head to Windsor Castle and meet with Queen Elizabeth. It was her first visit with a foreign leader since the coronavirus pandemic, per CNN, so it was a pretty big deal that they met and eventually had tea together, along with Dr. Jill BIden.

The visit initially drew attention because Biden got out of his car and took pictures with the queen still wearing his signature aviator sunglasses, only taking them off once “The Star Spangled Banner” had finished playing and they went inside. While some people on social media took issue with his wearing sunglasses to greet the queen, there were other moments between the president and the monarch that were lauded for being above-and-beyond respectful. And more importantly to some, the meeting revealed just how different Biden is from former President Donald Trump, especially when it comes to royal protocol and manners around the queen.

People noted that the queen was all smiles around the Bidens, with one person writing, “I don’t believe that the Queen was this happy when Trump was President. Thank you, President Biden and FLOTUS Dr. Jill Biden for representing America with respect, pride, and dignity.” Read on for more subtle signs that Queen Elizabeth and Joe Biden had a pleasant visit together.

Joe Biden was a perfect gentleman to Queen Elizabeth 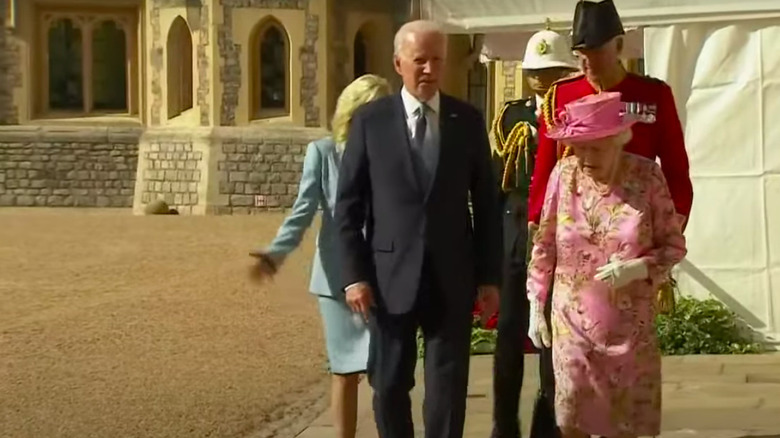 People watching closely noticed that President Biden offered his arm to the 95-year-old Queen Elizabeth as they started to walk down the stairs. She declined and used the railing, but many people were very impressed that he was gracious without touching the queen. “Biden is so sweet he’s watching to make sure the queen does not lose her balance as she walks down the stairs,” one person tweeted. Another added, “Notice how Biden offered his arm as the queen descended the stairs. Very subtle gesture without touching her. That’s class and proper protocol.”

While it certainly was kind, the bar must be pretty low when it comes to manners if people are excited that Biden is acting like a normal human being who doesn’t want someone who is almost 100 years old to fall down the stairs. But that’s where we are, apparently. Others noted that he let the queen walk in front of him while they went into Windsor Castle, something that former President Trump did not do when he met her in 2018. At the time, Trump was seen blatantly cutting the queen off, causing an uproar on social media about not only royal protocol, but just plain old manners.

Luckily, it looks like Biden did most things correctly. Hopefully, his tea etiquette was up to par as well.