Home » Celebrities » What You Need to Know About Alisha Wainwright, the Actress From *Those* Justin Timberlake Pics

What You Need to Know About Alisha Wainwright, the Actress From *Those* Justin Timberlake Pics 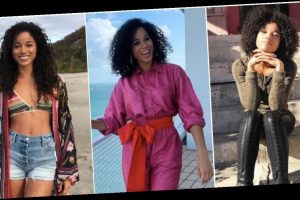 Remember when you were minding your own damn business dreaming about pecan pie the weekend before Thanksgiving and then Justin Timberlake came in like a wrecking ball? In case you’re suffering from turkey-related amnesia, The Sun published photos of Justin (man who is very much married to Jessica Biel) holding hands with actress Alisha Wainwright while they were in New Orleans shooting a movie.

And look, sources say the pics are no big deal—but in a video from the hang sesh, Alisha can be seen resting her hands on Justin’s knee and an eyewitness said, “He clutched her hand with both of his and was playing with her hands.”

Unfortunately for all parties involved, the drama surrounding these photos doesn’t appear to be dying down. And considering Justin and Alisha are going to be spending a ton more time together on their movie (not to mention what’s sure to be a truly awkward press tour), it’s time to get to know Alisha better. Because she’s (a) awesome and (b) famous for way more important things than holding hands with Justin.

She Casually Used to Be a Botanist

Alisha was born in Florida in the summer of 1989 (yeah, that means she’s 30) and got her start in science—not acting. Turns out, she studied botany and moved to Panama after school to conduct field research for the Smithsonian. “Science is one of the toughest industries because everyone is vying for the same pot of money to fund their research,” Alisha told W magazine. “I had a very weird anthropological-botanical focus, and I couldn’t find anyone to give me the money to study it. I had to shift my focus to something a little broader, and I wasn’t as interested in it.”

BTW, Alisha’s mom was super supportive of her pivot to acting. “Your mother is your guiding light into the world. That’s how I think about my mom,” Alisha told Shondaland. “My mom is an accountant and she’s Jamaican. She’s proud and excited that I took a chance on acting and it worked out. She’s on board and is my biggest fan.”

In other words, no, she didn’t go private after all this drama (and why should she?!). In fact, here’s Alisha in New Orleans just a few days before those Justin photos broke what’s left of the poor ol’ internet:

You Know Her from Shadowhunters

At least you do if you’re someone who watches Shadowhunters, which you should be because Freeform is a lifestyle. An-y-way, Alisha plays werewolf Maia Roberts—here she is doing her thing, by which I mean transforming into a giant puppy:

It’s Netflix’s new show produced by Michael B. Jordan, and Alisha stars as a single mother whose son has superpowers. You should definitely watch, just sayin’:

Hi, here’s Alisha proudly holding two sets of Catan while standing in front of a Star Trek painting, that’s all:

Oh this? It’s Catan. Yea i just had it here in my purse… want to play?

Apparently it’s about an “ex-convict” who “strikes up a friendship with a boy from a troubled home,” and you guessed it: she and Justin play “lovers.” Tragically, there’s no trailer for the movie yet since it’s currently filming, so I’m going to force everyone to watch this clip of Justin Timberlake in Trolls instead:

The following photos are best described as pure FOMO:

Conquering my fear of heights one mountain ledge at a time

Alisha actually wrote about a recent trip to Peru for The Hollywood Reporter, saying it was great to get back to her love of exploring without feeling the pressure of her previous job.

In a truly Thomas Markle move, he told the Daily Mail, “She is in New Orleans doing some work—that is all. They are working on a movie together. I did not make anything of it, really. I am a music producer, so I am used to all the hoopla. This is the business we are in. This is how it goes.”

He added, “I cannot be telling you whether or not she is in a relationship or things like that. She is a young lady, 30 years old, she is living her life and doing what she has gotta do. She has always been a big traveler and open-minded. Even if there is something [going on], I would not know. When you are in show business, you separate family from the business. When you are at home with your family, you talk about other things. You don’t talk about this crazy stuff.”

Cool, you’re now officially an expert in all things Alisha Wainwright, can’t wait to watch her career take off!