Yankees Beat the Mets With a Strong Start From Domingo German

By now, the Yankees know their batters are capable of posting back-to-back doubles in one inning and back-to-back home runs five innings later, just as they did in beating the Mets, 5-1, on Wednesday night at Citi Field.

What is less predictable is a start from a Yankees pitcher that lasts six innings. Through their 83 previous games, the starters had averaged five innings per outing, which was sixth worst in the majors.

But Domingo German offered a reminder of what the team missed during his stint on the injured list over the last month with a strained left hip flexor muscle. After allowing a home run to Mets right fielder Jeff McNeil on the first pitch that he threw, German limited the Mets to four more hits and no more runs. German, who threw 80 pitches over six innings of work, also got six strikeouts as he improved his record to 10-2.

“That was kind of that good, dominant version of Domingo that we saw so much the first couple months of the season,” Yankees Manager Aaron Boone said. “It was exciting to see him pitch that well.”

German can thank third baseman Gio Urshela for taking hits away from the Mets. Urshela’s first opportunity came when Mets third baseman Todd Frazier hit a slow roller down the third base line. Urshela charged in, fielded the ball and threw Frazier out at first.

Two innings later, Mets center fielder Michael Conforto met the same fate. And in the eighth, McNeil watched Urshela range to his left and then, from the seat of his pants, make a throw to beat McNeil at first.

“It was special,” said Boone, a former third baseman. “Some big-time plays over there by him. But we’ve seen it all year.”

The Yankees’ lineup gave German a 2-0 lead before he took the mound. First baseman D.J. LeMahieu led off the game with a double to left field, and right fielder Aaron Judge drove him in with a double of his own. Three batters later, second baseman Gleyber Torres lined a single to center to drive in Judge. 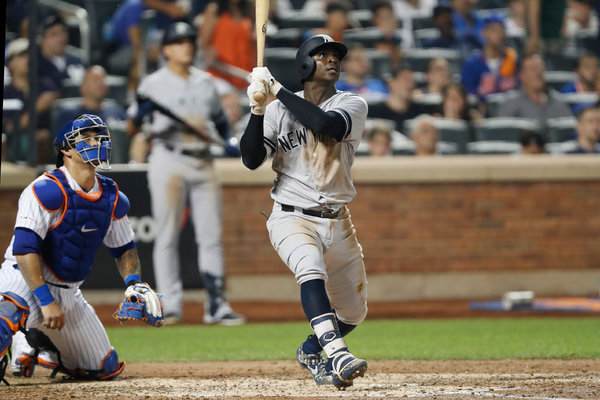 Torres’s statistics this season are comparable to his numbers at the same point last year, when he earned a trip to the All-Star Game. Yet on Wednesday, when the American League team needed an injury replacement, Tampa Bay Rays second baseman Brandon Lowe got the call even though his offensive statistics are not quite as strong as Torres’s.

“It’s a joke he’s not on that team,” Boone said. “Gleyber Torres not an All-Star — you can kick rocks on that one. That’s ridiculous. He’s been unbelievable for us, a first-place club, the offensive consistency, the power, the on-base, playing both positions in the middle infield. It doesn’t seem right to me he’s not on that team.”

German proved potent in his return, but Mets starter Jason Vargas confused the Yankees’ big bats only to have his final pitch prove costly.

On that pitch, Vargas’s 100th of the night, Yankees shortstop Didi Gregorius homered to right. Mets Manager Mickey Callaway said Vargas felt he should have stepped off the mound but proceeded to give up the home run on a 73 mile-per-hour changeup.

“It was just a situation where my total focus wasn’t on the bottom of the strike zone,” Vargas explained.

The next batter, Urshela, who changed his swing in the off-season to complement his stellar defense, then hit a home run off relief pitcher Wilmer Font to give the Yankees a 4-1 lead.

After splitting this two-game Subway Series, the Mets are off Thursday. The Yankees are scheduled to take on the Rays in Florida with J.A. Happ, who has struggled of late, as their starter.

If Urshela’s glove is as strong as it was Wednesday, Happ may end up as grateful as German was after his start.

“Magnificent,” German said of Urshela, and added later, “In my humble opinion, he’s a candidate to win the Gold Glove.”