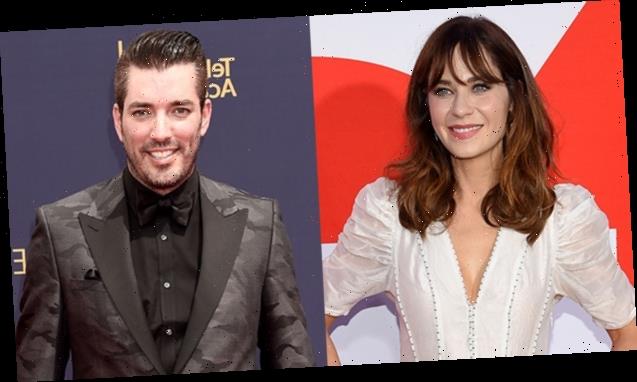 Fright night? More like date night! Zooey Deschanel and Jonathan Scott had a spooky date at a haunted house and took to Instagram to document the haunted evening.

Zooey Deschanel, 39 and Jonathan Scott, 41, really got into the Halloween spirit with a trip to Universal Studios’ Horror Nights on Oct. 20. The Property Brothers star took to Instagram following their scary double date with Jonathan’s brother Drew Scott, 41, and his wife, Linda Phan, sharing a pic, WHICH YOU CAN SEE HERE, of the couples screaming amongst the ghouls and specters from the haunted house. “So much fun last night,” Jonathan captioned the pic. “That high pitched scream totally wasn’t me!” In the photo, Zooey jumped into Jonathan’s arms, while he held his lady with a nervous smile on his face. Drew kept his wife wrapped in his arms while she covered her eyes. Surrounding the couples were people in terrifying masks, black cloaks, and chainsaws! It really looked like quite a double date.

While the date was definitely a bit of a horror fest, Zooey and Jonathan’s relationship has been nothing but romantic. The couple have been seen out and about together after going public with their relationship in early Sept. and have been showing off their love with the world! The duo were spotted in Beverly Hills on Sept. 19 in cute, matching blue outfits, holding hands and enjoying each other’s company. The New Girl star gazed adoringly at her man, while to the two strode around after reportedly dining at nearby eatery, Clementine, for lunch.

The pair first met in August when the Property Brothers got together with Zooey and her sister Emily Deschanel when they were all teamed up together to film an episode of Carpool Karaoke. “I will say it was a little bit daunting though because it was the brothers and the sisters, the Deschanel sisters and ourselves. I did not know that they were both professional singers,” he shared with HollywoodLife EXCLUSIVELY on Sept. 14, but he noted that it worked out in the end. “We were laughing – you know the sibling dynamic – I think there’s something with siblings that only other siblings can really understand.”

Zooey’s relationship with Jonathan comes following her separation from her husband of 4 years, Jacob Pechenik, 47. The couple share two children together, Elsie Otter, 4, and Charlie Wolf, 2. Since their split, Jacob has insisted that the couple’s relationship is incredibly amicable and that they are both working together to raise their two children.“We’ve been raising them and we’re going to continue to raise them, and take great care of get them…I’m happy.”