A Baltimore Hotel With Four-Poster Beds and Flamingos Aplenty

Plus: a clamshell chandelier, photography capturing deforestation and more recommendations from T Magazine.

Welcome to the T List, a newsletter from the editors of T Magazine. Each week, we share things we’re eating, wearing, listening to or coveting now. Sign up here to find us in your inbox every Wednesday. And you can always reach us at [email protected].

In Maryland, a Hotel Pays Homage to Its Building’s Original Charm 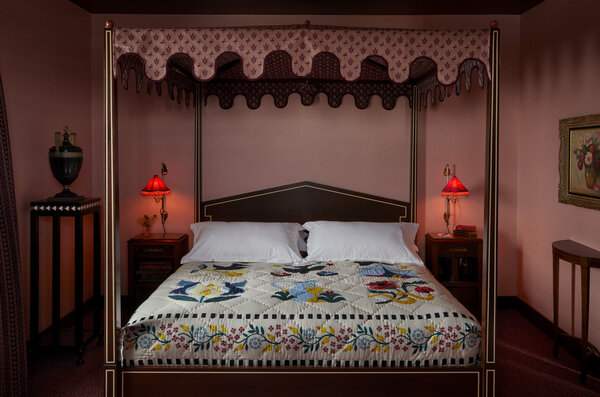 After opening hotels of note in Providence, Detroit and New Orleans, the New York-based design firm Ash has turned its attention to Baltimore. Set within the nine-story Latrobe building in Mount Vernon, a neighborhood where 19th-century mansions sit adjacent to crowded student bars, Ulysses — named after a ship that brought Bavarian immigrants to Baltimore in 1838 — follows the brief that Ash has established in other cities. “We try to capture the awe of our own travels and deliver it back to the world, so we write these wild design narratives that pull cues from the local context, the bones of the buildings,” says the company’s C.E.O. Ari Heckman. At Ulysses, the firm has preserved a delicate stained glass skylight in the ninth-floor elevator vestibule and ornate crown molding in the lobby. Next to the concierge is the brass postal box and chute from the building’s original internal mail system. Ash’s chief creative officer, Will Cooper, also took inspiration from the period in which the building was erected — 1911 to 1912 — which, he notes, was a “pivotal moment in design history moving away from the ornate Art Nouveau influences and into a more streamlined approach.” The hotel’s 116 rooms feature hickory wood furniture outfitted in Ash’s custom textiles, while hand-beaded lampshades from Jaipur and embroidered quilts offer colorful accents and bedside tables are supported by carved flamingos. The birds are a recurring motif — also present on the canopies that adorn some rooms’ four-poster beds — in a nod to Baltimore native John Waters’s 1972 film, “Pink Flamingos.” “From some angles, [Baltimore] is a buttoned-up old-money town, from others it is John Waters’s signature mix of sleaze, camp and art,” says Heckman. The latter is especially apparent at Bloom’s, the hotel’s “late-night drinking parlor,” where crimson banquettes and purple stools reverberate in the bar’s mirrored ceiling. From $169, hotelulysses.com.

Richard Mosse’s View of the Amazon

In “Broken Spectre,” a book of more than 300 infrared-film photographs taken over the last three years, Irish photographer Richard Mosse documents the unfathomable scale of degradation and deforestation in the Amazon. Scientists have warned that we are nearing a tipping point, after which the rainforest will not be able to recover. This project, like others by Mosse on the war in the Democratic Republic of Congo and the global refugee crisis, blurs the lines between photojournalism, documentary photography and contemporary art.

Mosse also takes readers inside the Pantanal, the world’s biggest tropical wetland, where a fire spreads underfoot. (Cattle farmers often burn swathes of land for agriculture, logging and ranching, and the region has recently experienced severe wildfires.) The fire is invisible to the human eye, but Mosse’s military-grade thermal camera reveals a heat map of rust-orange and brown that appears like a supernova or intricately patinated bronze. It’s a mesmerizing pattern that belies the horror of its subject. To create aerial shots, Mosse deploys drones and makes use of geographic information system (G.I.S.) technology. Illuminated by this imaging, the rainforest transforms into an apocalyptic and otherworldly landscape: The canopy layer is magenta, the river system is electric green and milky blue, and fires blaze incandescent. Mosse saves black-and-white film for images documenting the climate crisis up close: a wounded jaguar in recovery; gold miners at work; and Yanomami and Munduruku Indigenous communities speaking out against Brazil’s president Jair Bolsonaro, who is up for re-election in October. $57, loosejoints.biz.

A Giant Clamshell Chandelier, at Home in a Jewelry Designer’s Gallery

From her Manhattan apartment on Greenwich Street, Sara Beltrán can see the door of her new gallery and the enameled shark fin on its knocker. Inside, the 600-square-foot former tailoring shop has been transformed into Dezso, a showroom for the ocean-inspired, Art Deco jewelry and sculptures Beltrán produces with artisans around the world — along with her personal collections of antique Chinese rugs; coconuts carried from Tulum, Mexico; Milo Baughman furniture; and charred driftwood gathered from Sag Harbor, N.Y., beach bonfires. “People used to come to my house wanting to buy stuff,” says the El Paso-born, Juárez-raised designer of her choice to mix mediums at Dezso. Her palm tree-shaped lamps stand like a brass family against walls that have been painted in a shade of blue black she requested from Farrow & Ball’s archive. Hanging from the ceiling is what Beltrán considers her most important piece: a quartz clamshell chandelier. In June, a 265-pound crystal stone was selected, and Beltrán spent 10 days tracing the lines of the shell by hand with Roopchand Naraniya, the atelier carver she’s worked with for 17 years in Jaipur. It’s inlaid with a polki diamond (one of the oldest forms of cut diamonds, thin-sliced and backed with foil to reflect light), her signature. Unlike the trays of ebony, blue tiger’s-eye, and onyx charms that she displays for clients, the glowing fixture that illuminates her new space is not for sale. Appointment only from Sept. 26, dezsosara.com.

A Transportive Reggae Album From Protoje

When Protoje opened his show at New York City’s Webster Hall last week with a mash-up of two songs called “I&I” and “Flames,” he and his band evoked the feeling of a nighttime jam session off Barbican Road in Kingston. “I’m going to show you how Jamaicans do rock ’n’ roll,” he proclaimed. Protoje, born Oje Ollivierre in St. Elizabeth, Jamaica, is the progeny of Caribbean music royalty: His father is Michael Ollivierre, a calypsonian from St. Vincent, and his mother is Lorna Bennett, a singer who topped the Jamaican charts twice in the ’70s. He was in town as part of a tour to promote his sixth studio album, “Third Time’s the Charm,” his latest contribution to the reggae revivalist movement. In 2014, he founded the label Inn.Digg.Nation Collective, which in 2020 partnered with RCA Records to further uplift Jamaican artists such as the rising singers Lila Iké, Jaz Elise and Sevana.

On this September evening, the audience bobbed and swayed as Protoje launched into “Late at Night,” a duet featuring Iké, who swept across the stage wearing a shimmering pantsuit over a coordinated bikini top and Air Force 1s. This was Protoje’s first tour since the beginning of the pandemic, and the audience was equally happy to hear songs from his 2020 album, “In Search of Lost Time,” as well as newer tracks. The band closed with “Kingston Be Wise” and, after a night of dancing, some of the crowd lingered on the couches in Webster Hall’s lounge, riding the sonic high. “Third Time’s the Charm” is out Sept. 23, protoje.com.

A Woody Fall Fragrance From Celine

When it came to the creation of Celine’s new fragrance, Bois Dormant, the brand’s creative director, Hedi Slimane, sought to evoke an English double-breasted blazer, the likes of which he would find secondhand from London’s Savile Row when he was a teenager. The resulting scent — the final addition to the Day Series of Celine’s Haute Parfumerie collection — does ultimately conjure a certain cozy elegance, the kind of quiet refinement that needs not shout or over embellish. Housed in a weighty, rectangular fluted flacon with a faceted black cap, the woody fragrance combines creamy, powdery iris butter, crisp cedar and earthy vetiver with a hint of bitter brightness from bergamot and juniper to create a textural and genderless scent. It pairs just as well with a beloved knit as it does a tailored suit. From $240, celine.com.

In His Vancouver Home, a Lighting Designer Embraces a Natural Glow