Home » A Call to Diversify Those Calling the Cues

A Call to Diversify Those Calling the Cues

Perhaps the hardest-working people in theater, stage managers oversee all aspects of a production. They work closely with the director to mark down every piece of staging — from where the actors and sets are placed, to the sound and lighting cues. During “tech week,” when a show loads into a theater, they run the rehearsal process to ensure that technical aspects of a production flow smoothly before opening night.

The stage manager is also responsible for communicating with all the various backstage teams, from the lighting and sound experts to the dressers helping actors do quick changes.

“A stage manager is like a conductor,” said Lisa Porter, who over a 25-year career has worked on shows at the Public Theater and the La Jolla Playhouse, among others. “We conduct the tempo and the tone of rehearsals throughout the entire process.

“That’s why,” she added, “I believe fluency around antiracism is so important.”

Like many positions in theater, however, stage management has remained stubbornly homogeneous. A study published by Actors' Equity Association (the union for both actors and stage managers) revealed that between 2016 and 2019, 76 percent of stage managers employed on theatrical productions across the country were white. Only 2.63 percent were Black. As with many industries and areas of the arts, the George Floyd protests forced Broadway into a conversation about representation, and Black stage managers and their white allies have been active participants. They are establishing new organizations for racial equity, creating more opportunities for up-and-coming stage managers of color, and even examining aspects of their job that may do more harm than good.

Because stage management is a behind-the-scenes job, many people who grow up doing theater don’t know it exists.

Narda E. Alcorn, who is stage managing Shakespeare in the Park’s “Merry Wives” this summer, started as an actress. During her sophomore year at Los Angeles County High School of the Arts, she realized she wasn’t the best in her class, but discovered another set of skills. 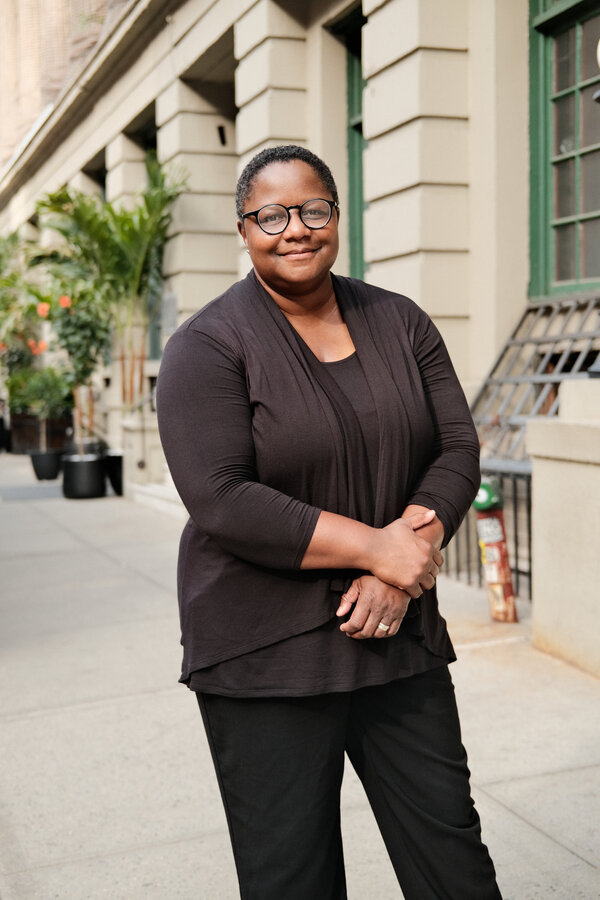 “I knew how to anticipate people’s needs,” she said, “and how communicate to different types of people, like how to speak differently to an actor versus a director or a production person. I didn’t realize there was a job for it until my teacher, thank goodness, recognized it in me.”

Alcorn, who is Black, received a BFA in production management from DePaul University and an MFA in stage management from Yale Drama School, where she met Porter, who is white.

They’ve been friends ever since, and are both professors of stage management: Porter at the University of California at San Diego, Alcorn at Yale. They incorporated their respective experiences into their 2019 book, “Stage Management Theory as a Guide to Practice.”

“Race has always been a factor when Lisa has received a job and when I’ve received a job, conscious or unconsciously,” Alcorn said. “However, in our country, whiteness is not named: It is the default, the norm. Peers have often cited my race as the reason I was hired, whereas with Lisa they cite her experience and skill. For years I felt diminished and tokenized.” (Porter agreed with her colleague’s assertions.)

When Black stage managers do get hired, it can be difficult for them to make their voices heard.

After graduating with an MFA in stage management from the Columbia University School of the Arts, R. Christopher Maxwell was hired to work on the acclaimed Broadway production of “Oklahoma!” But instead of being put on the stage management team, he was hired as a production assistant, a lower position on the totem pole.

“I didn’t have a voice in the room,” said Maxwell, who is currently assistant stage manager for Lynn Nottage’s play “Mlima’s Tale” at the Repertory Theater of St. Louis.

Even on shows where he has been a more prominent part of the production, Maxwell said he has struggled to get others to listen to him. On one show, he said he tried to explain to a white production manager that the dancers in the chorus had to wear a certain kind of shoe that matched their skin tone. “They didn’t listen and bought the wrong kind of shoes,” he said.

Before the murder of George Floyd, Alcorn, Maxwell and other stage managers of color had rarely spoken up about their experiences.

“After George Floyd, people were able to see the disparity in how people of color are treated,” said Lisa Dawn Cave, a Black woman who has been stage managing since the late 1990s. “It’s not that people didn’t take it seriously, it’s that they didn’t see it as widely as they thought, or they’d say, ‘Yes, it’s happening, but we hired one person of color on the team so it’s fine.’”

The statistics from the Equity study show the importance of making sure there are Black stage managers in the pipeline. “I only knew four or five of them,” Maxwell said. “So it became my personal mission to see who was out there.”

As part of that mission, he co-founded the Black Theater Caucus, where he is currently vice president of production artists. They have partnered with organizations like Cave’s Broadway & Beyond to create initiatives for entry-level stage managers of color who want to get into theater but did not follow that track in college or grad school.

Maxwell has become a delegate to Equity, where he helped to successfully pass a bill that resolves to track the hiring practices of the union’s bargaining partners, increase digital access to auditions, and recognize Indigenous people in union communications.

He has also highlighted Black and Latino workers in an Instagram series called Celebrating 101 Black Stage Managers. The Stage Managers’ Association took notice, offering free membership and setting up meetings with veteran stage managers for those singled out.

Matthew Stern, who has been stage managing for more than 20 years, runs the Broadway Stage Management Symposium, an annual networking event that created scholarships this year that allowed five stage managers of color to attend the May conference.

“It makes you realize that of course there are great Black stage managers,” said Stern, who is white. “We just don’t know them because we haven’t been in the same circles, and because of our circumstances and our privilege.”

American regional theaters have also stepped up. On June 30, the Alliance Theater in Atlanta announced that Shaina Pierce, a Black graduate of the University of Alabama, would be their first holder of a new fellowship for BIPOC stage managers.

For Alcorn, change needs to start with training itself.

In the past, she said, “I was very aware of diversity, representation and trying to be inclusive, but I was not actively antiracist, because I didn’t actually recognize it as a value. Now I believe it’s as important as empathy, kindness and striving for excellence.”

In a 2020 essay for the theater website HowlRound, Alcorn and Porter admitted that as stage managers, they had “unconsciously and complicitly upheld white supremacy culture within the production process.” Now when she teaches stage management, Alcorn shows students how to dismantle preconceptions that she believes can cause harm, like perfectionism.

“Stage managers are human beings who make mistakes and errors like every other member of a team,” she said. “I prefer to teach the value of excellence,” which she defines as “addressing mistakes with grace and generosity, and moving forward with greater understanding.”