Home » Entertainment » A ‘Marvel Universe’ for Musicals? Meet the Makers of Averno

A ‘Marvel Universe’ for Musicals? Meet the Makers of Averno

The start of the musical partnership between Morgan Smith and Sushi Soucy may not have been very Rodgers and Hammerstein, or even Pasek and Paul, but it certainly was very 2020.

“This past summer, Morgan and I became mutuals on Instagram and TikTok,” Soucy, 18, said in a video conversation from Savannah, Ga. Direct messages followed, then an invitation from Smith, 21, to collaborate on a show. An outline was hashed out via Google Docs.

Just a few months later, Broadway Records on Friday released the resulting concept album, “Over and Out,” about the relationship between Nova and Solar, college students who first connect by walkie-talkie, then must navigate the pressure of meeting face to face.

It’s no secret that shows like “Dear Evan Hansen,” “Hadestown,” “Be More Chill” and, of course, “Hamilton” have developed passionate online followings. But for new musicals like “Over and Out,” fandom and social media are not an aftereffect — they are baked in.

“Over and Out” is part of a series of musicals set in the fictional township of Averno and follows last year’s “Willow,” which Smith wrote with 16-year-old August Greenwood. That story deals head-on with acceptance and mortality as it tracks the parallel trajectories of two couples — Cassia and Grace, Adelaide and Beatrice.

In a few months, the label plans to add a third recording, “Bittersummer,” to its catalog, where the Averno releases — concept albums of shows that have yet to be produced — will sit next to cast recordings from Tony-winning productions.

”Obviously, they’re early stage, which you don’t normally get,” said Van Dean, the label’s president and co-founder. “But I think it’s interesting for people to see the process, because maybe in a few years there’s a next iteration that shows you how far it’s come. It’s easier to do that in a digital paradigm.” 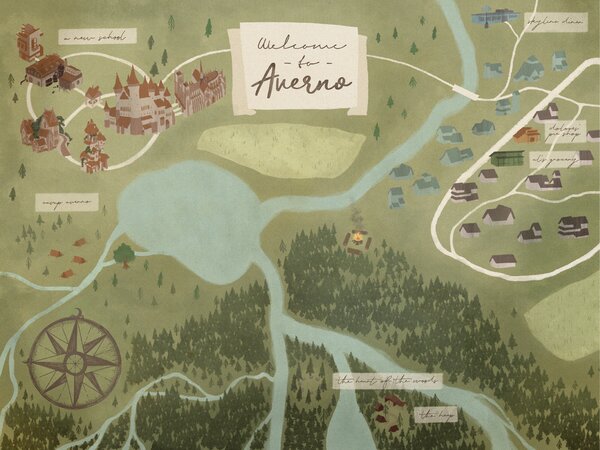 If you are not a teen, or the parents of one, chances are good you have not heard of Averno, the setting of a sprawling, cross-platform universe over TikTok (125,000 followers), Instagram (47,000 followers), Spotify (1.4 million streams), YouTube, Twitter and Tumblr.

It encompasses podcasts, livestreams, novels and short stories, TV and film scripts, an extensive alternate-reality game and, yes, musicals — all at different stages of completion.

Smith (who, like most people quoted in this article, uses they/them pronouns, reflecting the project’s queer and nonbinary inclusiveness) came up with what would turn out to be the roots of Averno at the Kenyon Review Writers Workshop in 2018. The multiverse fully metastasized in 2020, when people were at home with time on their hands.

The general vibe is drenched in the supernatural. The Averno logo, for example, is a ram’s skull, which at first seems a bit grim but makes conceptual and aesthetic sense when Smith, a New York University senior, starts listing such influences as the novels “We’ve Always Lived in the Castle” and “American Gods.”

Fan art is abundant and volunteers help with organizing, but Smith sets the world’s parameters. “The running rule is, if I didn’t make it or decide on it, it’s not canon,” they said. “Just because I have a very specific set of aesthetics and questions and themes — it’s what makes Averno feel cohesive. If this was just 150 unrelated artists working together, it would just be a cool collage without internal integrity or structure.”

“Willow” and “Over and Out” are not Smith’s first foray into musical theater. With the composer Mhairi Cameron, they wrote “Oceanborn” and presented it at the 2019 Rave Theater Festival — The New York Times called the show “confident” and “sweeping,” with a “gorgeous score.”

Smith pitched “Bittersummer” to Broadway Records last spring, but pandemic logistics delayed its release, so “Willow” and “Over and Out” ended up coming out first.

“I became quite fond of the work that Morgan and their team were doing,” said Dean, who mentioned he is looking into potential physical stagings in the future. “One of the things that attracted me is that nobody’s ever tried to create a Marvel Universe for theater, for musicals. Each piece may have its own trajectory but it’s all kind of tied together.”

Music is a major component of Averno, but Smith tends to see it as serving a bigger goal. “I’m not really interested in musicals,” they said, “I’m interested in telling stories that use music to further an emotion. I’m not trying to write the perfect Broadway standard — I’m trying to tell the best story I can.”

There are connections to the mainstream and Broadway, however, besides a record label or Christy Altomare, from “Anastasia,” performing a reprise of “How to Let Go” on the “Willow” album.

When they worked on that project, for example, Greenwood, a resident of Charleston, S.C., who cites William Finn as their favorite composer, recalls that Smith would say: “We need an opening, we need an ‘I want song’ sung by this character, we need all the different types of Broadway songs.

“I’m very imagery-based,” Greenwood continued, “so Morgan would be, like, ‘It needs to feel like a summer day’ and it would click in my brain and I would go off and write the lyrics and the music together.”

Soucy’s experience reflects a similar, refreshing lack of hand-wringing. “When I was around 12, I decided that I was going to write a song in the shower, and I did,” said Soucy (favorite composer: Stephen Sondheim; favorite show: “Sweeney Todd”) from their home in Savannah. “I remember thinking to myself, ‘This is easier than people make it out to be.’ And so I just started writing musicals. There’s a large community of friends who casually write musicals on the weekends,” they added with a laugh.

On both concept albums, lyrics set against intimate folk-pop arrangements capture with understated efficiency the angst of feeling alone and misunderstood when you are trying to find yourself: “The rest of the world/got a manual guide/to being the way that they are,” Janeen Garcia sings in “Ketchup” from “Over and Out.”

Not having a manual guide, however, can make you resourceful. “I really like how they are independent with it,” Bug Curtis-Monro, a 13-year-old fan in Liverpool, England, said of the Averno creators. “A lot of people would have to seek out … I know this sounds bad, but, like, more professional help.”

While wunderkinds are not new in pop — Taylor Swift and Billie Eilish are just some of the latest examples — young people speaking to and for each other is a fairly recent phenomenon in musical theater. And it is essential to Averno.

“The fact that we are basically the same people means that we’re able to connect,” said Elodie Prigent, a 17-year-old who has followed Smith’s work since “Oceanborn” and now helps out with Averno’s social-media channels. “We know how they feel because we are them.”

Such self-sufficiency may partly be in response to being asked to jump through hoops, or risk being ignored for who you are. Gatekeepers — largely, let’s face it, middle-aged white men — have been known to dismiss the teen girls or nonbinary folks who happen to form the core audience and creative teams of Averno.

“I’m 21 but people still have trouble taking me seriously sometimes, which I get,” Smith said. “I’m really hoping in the upcoming year that producers and publishers start seeing the market. Clearly we have a standing audience, and our merch sales are growing excellently.”

Greenwood senses a change in the musical-theater establishment’s receptiveness to the virtual realm — and is glad it’s happening.

“For a while nobody really listened to people who were super-young and were just going on about their musicals online,” they said. “But now I think producers see that these can be successful. They are finally, in quarantine, realizing that it’s a really good way to get new work.”