Home » Entertainment » A Museum Show for the Spies of Tomorrow

A Museum Show for the Spies of Tomorrow

LONDON — The laptop — or what’s left of it — is a mangled carcass: Its innards have been ripped out, and only a few strips of metal and plastic remain. This was the MacBook Air that The Guardian used to store files leaked by the United States intelligence contractor Edward Snowden. Guardian employees destroyed the computer with power tools in July 2013 after the files on it were deemed a threat to British national security.

The destruction order came from the Government Communications Headquarters, or GCHQ, a 100-year-old intelligence and security agency tasked with keeping Britain safe. The organization, which usually prefers to be under the radar, is celebrating its centenary with “Top Secret: From Ciphers to Cyber Security,” an exhibition of more than 100 objects at the Science Museum in London that runs through Feb. 23.

In addition to the laptop, the items on show include an encryption key used by Queen Elizabeth II to make sure her phone conversations weren’t tapped and a briefcase containing a clunky brown handset that Prime Minister Margaret Thatcher used for top-secret calls.

GCHQ is one of Britain’s most secret and secretive organizations: It wasn’t officially acknowledged in law until 1994. So why has it decided to appear in a London museum?

“We needed to tell our story, to be able to show the British people that this is what we do on their behalf,” said Tony Comer, the organization’s official historian. Part of the aim, he added, is to convince “those who really like solving problems that perhaps a career in GCHQ is the right thing for them.” 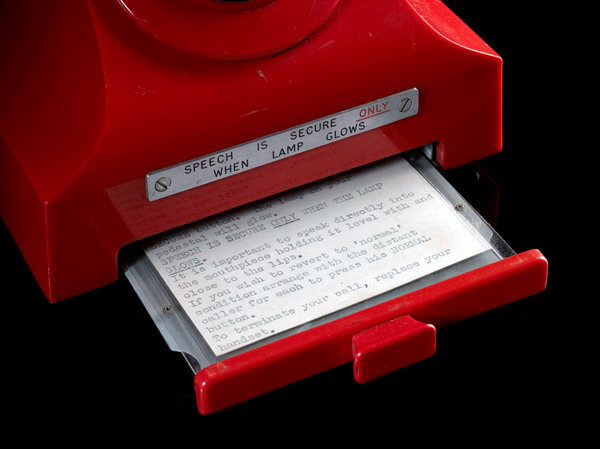 He said that the agency was “radically” rethinking how it can attract the intelligence operatives of tomorrow.

“It’s up to us to persuade them how cool it would be to work in a place like GCHQ,” Mr. Comer said.

“Top Secret” is cleverly crafted to appeal to audiences of all ages. Adults can learn about the everyday business of communications-based espionage and counterespionage, and children have a play area full of word and number games.

The exhibition’s richest sections, which are devoted to World War I, World War II and the Cold War, showcase the unwieldy contraptions used for espionage that could now be replaced by a desktop computer, a laptop or a smartphone.

One section focuses on the first downing of a German airship over Britain, which killed 16 crewmen, in September 1916. A vitrine displays the cutting-edge technology of the time that was used to spot the airship: a radio device fitted in a wooden, glass-fronted box, with knobs on top. Also on view are pieces of metal and fabric from the skin of the airship; and a cap, badge and boot that belonged to the German airmen.

A section about British intelligence services dismantled a Soviet spy network in 1961 recreates a home in suburban London, complete with 1960s-style floral wallpaper. It includes a radio transmitter that two spies from the ring concealed under their kitchen floor, and a cigarette lighter with a secret compartment for encryption codes.

Other sections allude to the use of satellites and online hacking in intelligence gathering.

The exhibition is “not necessarily dealing with a lot of stuff that’s contemporary,” said Elizabeth Bruton, the curator of communications at the Science Museum. GCHQ was “still a secret organization,” she added, “so even though we’ve worked closely with them for this exhibition, there are still things that they do that are kept secret.”

Stuart McKenzie, now a vice president at the Mandiant consulting arm of the cybersecurity company FireEye, worked for the British government for 11 years. He said the business of intelligence had not changed drastically since World War II. “People are still trying to break codes; people are still trying to get in and steal secrets,” he said. “Some of the tools have changed.”

As the world moves toward an “intellectual and thought-based economy, where intellectual property is the key,” Mr. McKenzie said, “protection of state secrets and organizations’ secrets is going to be the most important thing.”

In the modern-day cyber landscape, he said, Britain needs more than “a few people who’ve gone to Oxford and Cambridge,” so it made sense for GCHQ to reach out to a wider pool.

But were the show’s young visitors eager to join the cloak-and-dagger world of GCHQ?

Jake Drexler, 12, visiting from Los Angeles with his father, a gaming-industry executive, was busy solving a scrambled word puzzle on the exhibition’s opening day. He said the show was “fun” and that he liked the wartime displays.

“They had to keep telling each other codes, but without letting the other side know what was happening,” he said. “It was interesting how they figured out how to do that, and how they broke the codes on the other side.”

Did he want to become a spy when he grew up? “A spy, maybe not so much, but a code breaker, that would be cool,” he said. “I mean, it’s less risky.”

Colin Pilat, 11, who was visiting from Vaires-sur-Marne, France, with his parents and three siblings, voiced similar concerns.

There is “action and logic” in espionage, he said, but “it’s pretty dangerous — that’s the problem.” As a spy, he said, one could “get arrested for a long time, and there could be enemies, because you’re spying on someone, and these are dangerous people.”

He greeted the prospect of a future in espionage with a shrug. He said he’d rather be an architect.

Top Secret: From Ciphers to Cyber Security
Through Feb. 23, 2020 at the Science Museum in London; sciencemuseum.org.uk.