A New Wellness Brand That Harnesses the Power of the Garden

During the pandemic, longtime creative director Scott Formby found respite, and inspiration for a new venture, in his own lushly planted backyard. 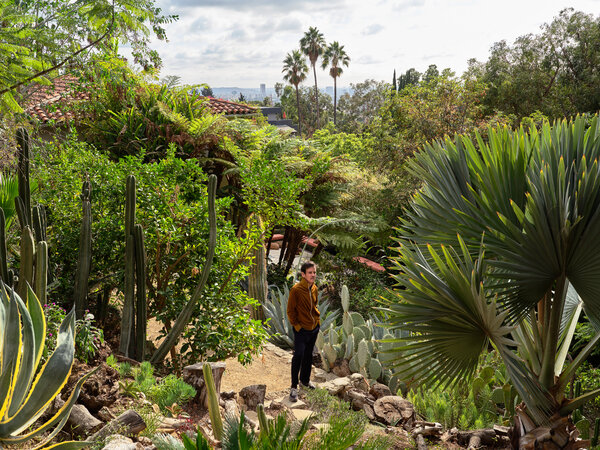 Even when the creative director Scott Formby was working around the clock for fashion and interior brands like Ralph Lauren and Frette, he’d figure out a way to get himself outdoors. “I’d organize a shoot in the middle of a garden on the Amalfi Coast,” he recalled recently from his home in Los Angeles’s Hollywood Hills. When he bought this 1920s Spanish Colonial-style house 15 years ago, its 2,500-square-foot terraced garden, on a connected but separate lot, was a large part of the appeal, and after the drought that hit the area in 2014, he transformed it to reduce its water requirements. “I kept the old lemon trees but added a lot of cactuses and, inspired by the Mediterranean, fig and mandarin trees,” he said.

About two and a half years ago, Formby’s frequent trips between New York (where he has an apartment) and Toronto for his then job as the chief creative officer of the Canadian bookstore chain Indigo — and the resulting lack of garden time — were starting to wear him down. As a distraction, he began speaking with his colleague Jennifer De Klaver, who is now his business partner, about the idea of working together on a small wellness venture that would celebrate the beauty and healing properties of plants. “Just talking about it felt like oxygen to me,” he recalled.

When he eventually quit his job at the end of 2019, Formby decided to spend more time in Los Angeles, where he hoped to recharge and putter around in his garden. Just a few weeks later, the pandemic hit the West Coast and, because of lockdown measures, he had more free hours to care for his plants than he’d ever imagined. By the end of that spring, he had a bumper crop of citrus fruits and avocados and started to sell them at local farmers’ markets. Sometimes, he’d simply leave a basket of lemons by the roadside with a sign that read “Free Vitamin C!” “It was like therapy for me,” he said. “That was also around the time we decided to turn our idea into something real.” He and De Klaver found a laboratory in Colorado to help them formulate the natural oils and creams, loaded with medicinal botanicals, that they had dreamed up during their years commuting — products that would blend the anti-inflammatory properties of cannabinoids with strong organic ingredients, such as echinacea and evening primrose, and combine Old World knowledge of herbs with cutting-edge science.

The visual concept for Figaro Apothecary, as the pair named the brand, came into focus later when Formby saw a picture of “Landscape With a Cowherd,” a serene rendering of the Italian countryside painted around 1637 by the French artist Gaspard Dughet, online. “Both Jennifer and I wanted to speak to the healing properties of art, in addition to those of plants, and that painting became a definitive jumping-off point,” he said. In fact, they liked it so much they decided to license the work to use in their branding. Much of the packaging in the wellness space, said Formby, is “white, clean and clinical and we felt that didn’t work visually for our serums, which are so packed with organic botanicals.”

This month, the line will launch its first two products: the Botanical Serum and the Relief Balme. Both formulas feature a potent combination of organic green echinacea extract sourced from a farm in upstate New York and CBD; some research has shown that the two ingredients can work favorably together to reduce inflammation of the skin and muscles. “We’re not branding ourselves as a CBD company,” explained Formby. “But echinacea is a powerful booster for CBD and its properties can work well on the skin.” He says the serum, which includes 30 other botanical ingredients such as wild geranium and patchouli, enhances radiance and has a calming effect, while the balm, which includes arnica and extracts of mint and wintergreen, can soothe aches and muscle pain. Up next, and scheduled to arrive in spring, are a moisturizing face cream and a tincture infused with ginger, turmeric and elderberry that is designed to aid the immune system and improve sleep quality.

All the while, Formby has continued to tend to his garden, even adding a new area for medicinal herbs such as wild marigold and chamomile that he describes as a “kind of laboratory.” He’s also found new uses for his abundance of produce. Last Christmas, he made a huge batch of fig compote and sent 50 jars to friends and family on the East Coast and in Texas, where he grew up. The recipe, which he shares below, was inspired by a version he tasted years ago in Turin, Italy, and he likes to use it as a topping for yogurt or toast, serve it with hard cheeses or pour it over rose ice cream. “As a kid in Texas, I never knew what a fig tasted like,” he said. “If you had said 15 years ago that I would be making my own jams and herbal tinctures, I would have rolled my eyes and said, ‘What are you talking about?’ But the garden has become a true refuge for me. I’ve realized how healing and life-affirming it is to watch things grow, especially during such a tragic time.”

1. Place the figs, balsamic vinegar, orange zest, orange juice, sugar, salt, vanilla bean, rosemary and cinnamon in a medium heavy-bottomed pot. Cover and bring to a boil over medium heat. (It may look dry, but don’t worry.) Boil for 1 minute, stirring to dissolve the sugar.

2. Lower the heat, add the bourbon and cook uncovered at a full simmer (you want small bubbles to be visible throughout the pot, not just at the edges) for 45 minutes to 1 hour, stirring occasionally, until the figs are falling apart and the mixture has the consistency of a soft fruit preserve.

3. Discard the vanilla bean and serve or refrigerate the compote. It will keep in the fridge for about two weeks.