A Pledge to Help Artists Becomes a Lucrative Lifeline

UDIMORE, England — It has always been difficult for artists to make a living. But in March, when fairs and galleries shut down across the world, even established names found their income streams suddenly drying up.

“When Covid happened, everybody left their posts. The gatekeepers left the door open,” said Matthew Burrows, a British painter and founder of the Artist Support Pledge, an initiative on Instagram that has been helping artists sell modestly priced works to a global audience through the pandemic.

“I thought now is an opportunity to do something you can’t normally do,” he said in an interview in his studio in rural Sussex, southern England. “This is the art world shutting down. I’ve got to do my little bit.” 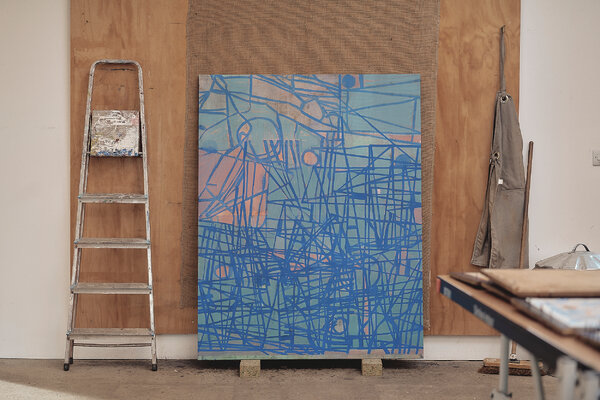 The idea is simple. Artists anywhere in the world use their own Instagram accounts to post images of works for sale, with a maximum price of 200 pounds (or $200 or 200 euros) — far below the minimum that most dealerships charge for original art. The artists add the hashtag #artistsupportpledge, which includes them in the initiative’s vast online shop window of affordable works that Instagram users can browse.

If someone wants to purchase a work, the buyer messages the artist directly. And the artists all pledge to spend £200 (or dollars or euros) on other works once they sell £1,000 of their own, to support fellow participants.

Images of the artworks are posted for free, there is no selection process and no commission is charged on sales.

“It doesn’t discriminate in any way between good or bad, experienced or inexperienced, amateur or professional,” Mr. Burrows said. “It doesn’t matter.”

So far, there have been more than 445,000 tagged posts, but, because the artists administer their own sales, there is no authoritative data on how many works have been sold.

In April, however, the freelance data journalist James O’Malley wrote some code to monitor the hashtag’s use. His two-week analysis suggested a rough estimate of £15 million of sales had been made, either from pieces tagged directly, or from “spillover” purchases of works from participating artists’ studios.

A forensic audit of the initiative’s performance has yet to be conducted. “It’s expensive,” Mr. Burrows said of such an effort. But on the basis that the hashtag’s use has increased more than sixfold since May, he estimates that up to £60 million in sales may have been generated by more than 50,000 artists.

“It was set up as a survival mechanism,” said Mr. Burrows. “It turned out they weren’t just surviving on it, they were thriving.” Some were making “double or triple what they were before,” he added.

Karen Knorr, a London-based photographer represented by several New York galleries, is one of the tens of thousands of artists who have benefited from Mr. Burrows’s online initiative. “When Covid hit, sales went down. I was anxious, as I support an artist’s assistant, have a studio and storage,” Ms. Knorr said.

“I’m an Instagram user, and have been for years. I noticed the Artist Support Pledge and dived in,” she said.

Her first post, in April, a five-photograph edition showing birds in an Abu Dhabi mosque, each priced at £200, sold out within three minutes.

“It was bizarre. That had never happened in my life before,” Ms. Knorr said. She added that, on average, she was making £6,000 to £10,000 per month from sales of her photography through the Artist Support Pledge.

The works she buys to fulfill her end of the bargain are from artists all over the world, including several from Brazil, she said. “It feels good helping other people.”

Many buyers who aren’t artists feel the same way.

“I wouldn’t normally buy art online,” said Deborah Nagan, a London-based landscape architect and occasional collector who, since March, has bought six works by British artists through #artistsupportpledge. But, she said, “It seemed right to support artists in lockdown.”

Research for the latest Hiscox Online Art Trade Report, set to be published this year, showed that 55 percent of a sample of 552 international art buyers had bought works online during the pandemic to directly support artists and arts organizations, according to the survey’s author, Anders Petterson.

Mr. Petterson said that the Artist Support Pledge was “an example of a new patronage model, a sort of venture philanthropy.” He added that it had “enabled people to engage at price levels that weren’t available before. The artist has found a way round the gallery system.”

The Hiscox reports have shown how, over the past 10 years, numerous specialist start-ups have devised strategies to sell art online, without a breakthrough product emerging. Paradoxically, as Mr. Petterson noted, it has taken a one-man nonprofit in the English countryside to come up with a dial-moving business model.

Mr. Burrows said a bigger marketplace was a plus for all artists. “If we can have a permaculture, a broader ecology of a marketplace for artists, we all thrive better,” he said. “If the art world is going to have true health, we’ve got to look at every element, not those that are just big.”

That said, what has enabled the Artist Support Pledge to help so many thousands of creative individuals, is one of the players in today’s art world.