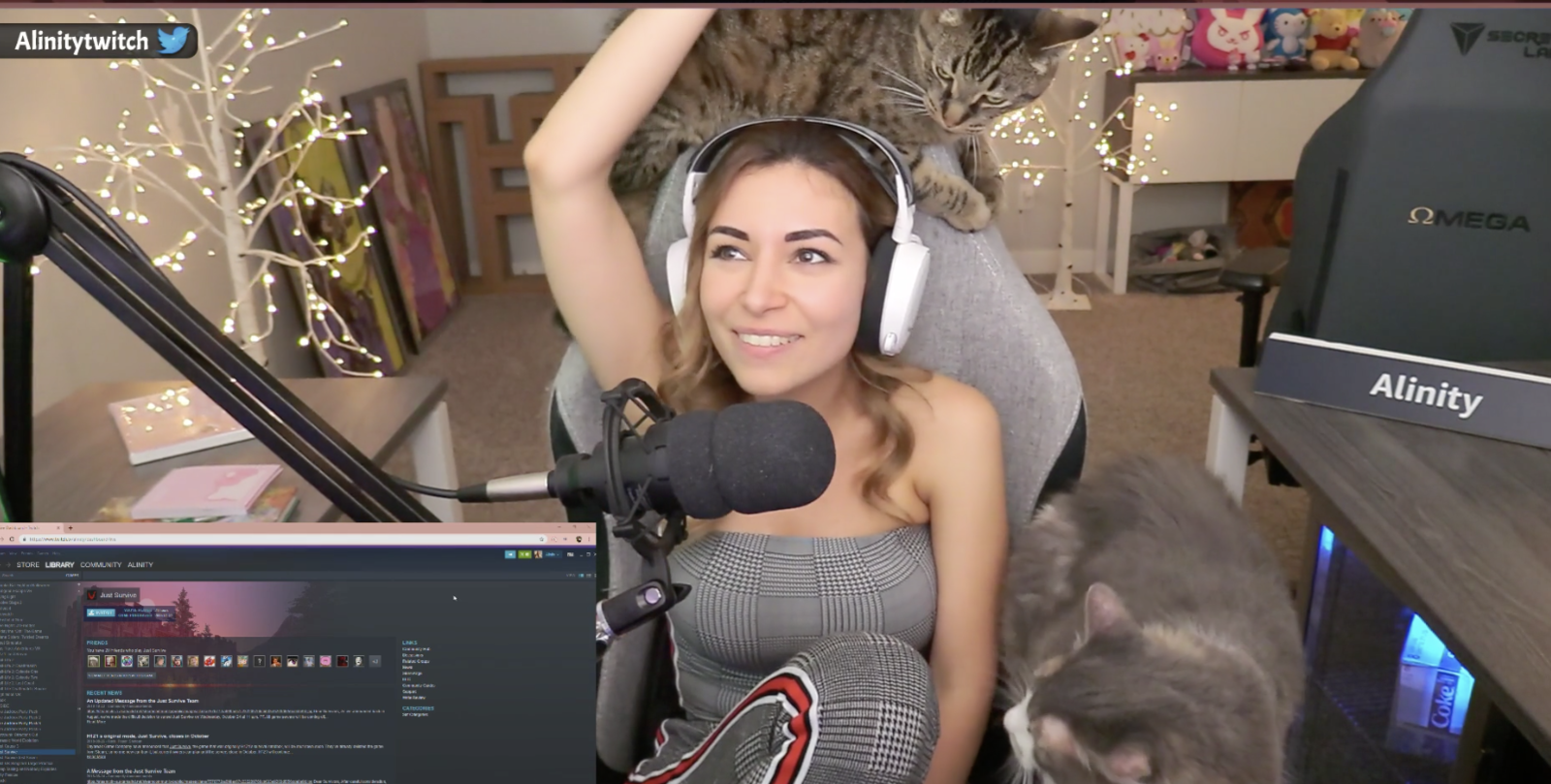 Natalia “Alinity” Mogollon is a popular gamer with more than 892,000 followers on Twitch. She also repurposes clips of some of her greatest hits to more than 142,000 followers on YouTube, but she’s mostly known as a professional livestreamer — and, apparently, a controversial one.

Last year, PewDiePie, the Swedish YouTuber with a history of anti-Semitic statements who has been embraced as a meme by the far right, called her and other women of their shared community “stupid Twitch thots.” He even went as far as blaming her for the harassment she received based on how she dressed.

But Mogollon has angered other gamers in the past through her own words and actions. In 2018, the Colombian-born gamer received criticism after flippantly saying she married a Canadian man to move to Canada, only to then divorce him. Her response to PewDiePie’s remarks was also controversial because she proposed issuing a “copy strike” against his channel.

Now, over the past few weeks, Mogollon has been the subject of accusations that she mistreats her pets after she was filmed throwing her cat over her shoulders while gaming live on Twitch last week. Others have since uncovered an old clip where she softly kicked her dog as it chased her cat, and other incident in which she kissed her cat while her mouth was full of vodka — an incident that even caught the eye of comedian Ricky Gervais.

When contacted for comment about the incidents with her animals, Mogollon pointed BuzzFeed News to tweets she wrote last week in which she apologized for her “lapses of judgment.”

It’s important to note that some of the concern about Mogollon’s animals appears to be genuine. The vodka incident, in particular, has disturbed many people.

But the controversy and outrage is also being amplified by anti-women gamers and is evocative of the vitriolic sexist abuse that many women on the platforms are subjected to. It’s also shone a light on the messy gender politics in these spaces.

While some popular women users on Twitch have spoken out against Alinity, much of the effort was first led by male gamers who believe that she’s being granted special favors because of her sex.

Since the uproar began, she’s also been subjected to an avalanche of sexist criticism and has said she’s even been doxed. People have also called Canadian animal welfare officials to investigate Mogollon, while numerous campaigns are being waged to get her permanently banned from Twitch.

The result has been all-out social media dystopian warfare, not unlike Apex Legends, the game Mogollon was playing when she was filmed tossing her cat.

Last week, the cat-throwing moment was caught, recorded, clipped, and shared across Twitch and then on Twitter, where it went massively viral.

It was then picked up by gamer blogs, and the actions depicted in the six-second clip were labeled “abuse.”

Big gaming personalities like Keemstar, a huge and controversial YouTuber who closely covers gaming drama, picked it up and began waging a personal effort to have her banned from Twitch. “And now she threw a cat over her head! If a man did this perma ban!” he first wrote, later tweeting, “WHY DOES TWITCH ONLY BAN MEN????”

Ian Miles Cheong — a gaming writer, Twitter personality, and contributor to the right-wing website Daily Caller, and an editor at the ultraconservative news site Human Events — was one of the first to amplify the narrative that “Alinity is an animal abuser.”

He then tweeted at @Twitch and @PETA on Friday to get their attention. Tagging PETA worked, as the animal rights activists soon issued a tweet urging Twitch to ban her for alleged animal abuse.

The Saskatoon Society for the Prevention of Cruelty to Animals then announced that “a formal cruelty complaint regarding this matter has been filed” and that it is investigating the matter. (BuzzFeed News has reached out to Saskatoon SPCA to learn more.)

After the recent clip of her throwing her cat successfully became viral, other gamers began sharing the older clips of Mogollon’s treatment of her other pets. The clips have sparked a debate about whether her actions endangered her animals. Some are adamant that tossing a cat in the manner she did is perfectly fine, while others believe it’s not OK. Most, however, agree that giving vodka to her cat is dangerous behavior.

Mogollon has insisted her animals are “well loved” and that she would cooperate with any animal welfare investigation. She also claimed she has called the SPCA to conduct a wellness check on her pets to prove that they’re not being abused. (She declined to comment any further on the matter to BuzzFeed News.)

But the entire messy affair is now being held up by male gamers as evidence that they are being unfairly treated by gaming regulators compared to women. A massive Change.org petition was created to call attention to the supposed double standard from Twitch. It’s been signed by more than 25,000 people. Keemstar has also claimed to his 2 million Twitter followers that Mogollon receives “special favoritism” because of her gender. (Twitch has not yet responded to numerous requests for comment from BuzzFeed News.)

All this has also sparked its own rash of sexist abuse against Mogollon.

“I’m wondering how many bj’s this cost,” a user tweeted at her; “Alinity be sucking some mad D at the HQ ?” someone else quipped. A popular member of FaZe Clan, an online e-gamer society, called her a “stupid bitch,” and numerous NSFW memes have been created about why she’s not yet banned.

On Reddit, Mogollon has once again been dubbed a “stupid Twitch thot” — the same slur PewDiePie used last year.

Mogollon claims that the online abuse has even spilled over into the real world. “Please stop coming to my house and asking my neighbours where I am,” she wrote Sunday. “Its [sic] actually really scary.”

Amid the trolling replies telling her the people coming to her house were deportation officials or animal welfare officers, it appeared at least a few users seemed to think the whole drama had gone too far.