2022 was a year of devastating celebrity losses.

In the year’s very first days, the world was rattled by the death of historic actor Sidney Poitier at 94 years old. In 1964, Poitier became the first Black man to win the Oscar for Best Performance by an Actor in a Leading Role for his performance in 1963’s Lilies of the Field. A true icon! 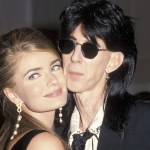 Then, the year’s last few days also rocked the world with unexpected goodbyes. Among the celebrity passings was the death of Brazilian soccer legend Pelé after a complicated battle with colon cancer, godmother of punk and legendary fashion designer Vivienne Westwood at age 81, and ground-breaking journalist Barbara Walters who passed away at 93.

Whether you followed them closely or just knew about their importance from afar, the celebrities we lost in 2022 changed the world and their absence will forever be missed.

As we begin 2023, we’d like to wish that no celebrity unexpectedly passes away this year, though we also know it’s a natural and sadly unavoidable life cycle.

Our thoughts are with the families of those we’ve lost this year, and we honor their memory by reflecting on their legacy.