Anna Halprin, a dancer and choreographer who sought to move beyond what she saw as the constraints of modern dance, and whose experiments inspired, challenged and sometimes perplexed generations of dancers and audiences, died on Monday at her home in Kentfield, Calif., in Marin County. She was 100.

The death was confirmed by her daughter Daria.

In a career that began in the late 1930s and took off after she moved to San Francisco in the mid-1940s, Ms. Halprin sometimes attracted controversy. But she also attracted students, disciples and enthusiasts fascinated by the creative issues she explored and the way she explored them.

Ms. Halprin’s influence as a teacher was far-reaching. Among the dancers and choreographers who studied with her before going on to successful careers were Meredith Monk, Simone Forti, Yvonne Rainer, Trisha Brown and the team of Eiko and Koma.

As a choreographer, Ms. Halprin stressed improvisation, but within structured limits. Her works included mysterious mood pieces like “Birds of America or Gardens Without Walls” (1960), in which stillness was as important as movement, and “Five Legged Stool” (1962), in which everyday actions were juxtaposed in unexpected ways. She also collaborated with Bay Area poets like James Broughton and Richard Brautigan. She later looked for ways to involve the audience directly in her work, and to make social and political statements through dance.

Her San Francisco Dancers’ Workshop made a spectacular New York debut at Hunter College in 1967 with “Parades and Changes,” a choreographic cavalcade of moods and situations with music by the electronic composer Morton Subotnick. In the work’s most unusual sequence, dancers slowly removed their clothing until they were totally nude, then just as slowly put their clothes back on, only to disrobe again and romp with long strips of crumpled-up paper, then roll into the orchestra pit. 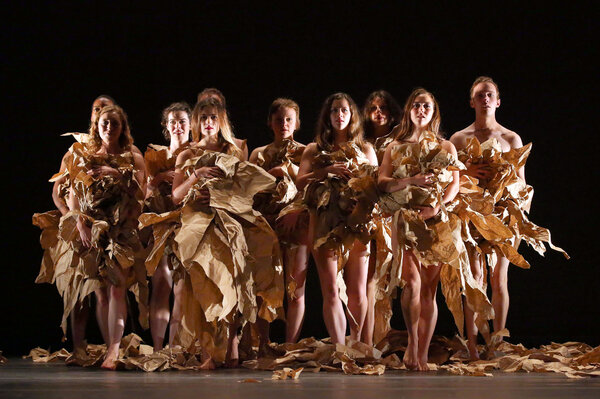 There had been nude dance events in New York before, but never in so prominent a place. To forestall possible police intervention, newspaper dance critics, who in those days often filed their reviews immediately after a performance, agreed this time to wait until the weekend performances were over and the company had left town. (The Manhattan district attorney’s office filed indecent-exposure charges against the troupe a month later, although no further action was taken.)

Critics were generally impressed. Despite his reservations about the work as a whole, Clive Barnes of The New York Times called the nude scene “not only beautiful but somehow liberating as well.”

She was born Ann Dorothy Schuman on July 13, 1920, in Wilmette, Ill., a Chicago suburb. She was the only daughter and youngest of three children of Isadore Schuman, who worked in his family’s clothing business and later in real estate, and Ida (Schiff) Schuman.

She danced as Ann Schuman and then, after her marriage in 1940 to Lawrence Halprin, the landscape architect and urban designer, as Ann Halprin. She started using the first name Anna in 1972.

Fascinated by movement as a child, she was encouraged by her parents, who enrolled her in dance classes and even occasionally had dance teachers live in their house. She attracted the attention of Doris Humphrey, one of the era’s leading choreographers, but she knew her family wanted her to attend college, so she enrolled in the University of Wisconsin, Madison, which offered a progressive modern-dance curriculum.

In 1945, shortly after dancing on Broadway in “Sing Out, Sweet Land!,” a musical revue starring Alfred Drake and Burl Ives and choreographed by Ms. Humphrey and Charles Weidman, Ms. Halprin moved with her husband to the San Francisco area. They built a home on the slopes of Mount Tamalpais in suburban Marin County, with a handsome outdoor studio they called the Dance Deck.

“In those days,” Ms. Halprin told The Times in 2010, “there was not much happening in San Francisco. And so it required really finding your own roots, and it turned out to be a good thing.

“There were other artists who were also searching — musicians and painters, poets and sculptors, and architects. There was just a great awakening in the Bay Area.”

In 1955, Ms. Halprin was the only West Coast dancer invited when the American National Theater and Academy sponsored a three-week dance festival in New York. Reviewing her solo piece “The Prophetess” for The Times, John Martin said it “showed her to be a dancer of genuine authority who knows how to make a dance as well as to dance it.”

She returned to California dismayed that the young choreographers whose work she saw in New York were, in her view, merely imitating their elders. Determined to search for modes of expression not beholden to the past, she severed her affiliation with Mr. Lathrop and founded the San Francisco Dancers’ Workshop.

By the time “Parades and Changes” attracted New Yorkers’ attention in 1967, Ms. Halprin’s artistic focus was changing. She grew increasingly interested in dance not only as a theatrical art, but also as a means of promoting psychological development and advancing social and political causes.

Her “West/East Stereo” (also known as “Animal Ritual”), presented at the 1971 American Dance Festival in New London, Conn., resembled a therapy session, with performers engaging in sometimes bellicose emotional encounters. Reaction was mixed. The piece was praised by Frances Alenikoff in Dance News as “a dive into the collective unconscious from which I for one emerged refreshed.” But Doris Hering wrote in Dance magazine that “therapy is essentially personal” and not necessarily “much fun for an audience, especially when the performers are technically mediocre.”

Ms. Halprin went on to blur the distinction between performers and spectators by creating communal rituals in which everyone present participated, among them “Circle the Earth,” which enlisted the audience as performers in what she called a “peace dance.” Drawing on her own experience as a cancer survivor, she led movement workshops for people with cancer and AIDS.

In 1978, Ms. Halprin and her daughter Daria, who had been one of the stars of Michelangelo Antonioni’s 1970 film “Zabriskie Point,” founded the Tamalpa Institute in San Rafael, Calif., which offers workshops in movement-based arts education and therapy.

In later years Ms. Halprin, who continued to dance until she was 95, returned to creating works for the stage, many of which addressed aging and death. “Intensive Care: Reflections on Death and Dying” (2000) confronted life-threatening illness. In contrast, “The Grandfather Dance” (1994) paid affectionate tribute to her grandfather, a religiously observant man who, she recalled, could look so imposing that as a child she thought he might be God.

In 2009 Ms. Halprin was the subject of a documentary film, “Breath Made Visible.” Reviewing it in The Times, Jeannette Catsoulis said the movie “portrays a woman with angels in her feet and innovation in her blood.”

Ms. Halprin’s husband died in 2009. In addition to her daughter Daria, she is survived by another daughter, Rana, and four grandchildren.