Home » Entertainment » Becoming a Part of the Story

Becoming a Part of the Story

Hey, hey everybody — Happy Friday. Our team is on the hunt for new things to watch this weekend, having ripped through “The Queen’s Gambit” and “The Undoing” during our days off for Thanksgiving, so email us any recommendations you’ve got!

After resurfacing from our carbo-induced couch comas, here’s what we covered on the show this week. On Monday, we investigated when and how you might get a coronavirus vaccine. On Tuesday and Wednesday, we examined the careers of President-elect Joe Biden’s cabinet picks, beginning with Janet Yellen for Treasury Secretary, followed by Antony Blinken for Secretary of State. On Thursday, one man shared his story of sexual abuse while in the Boy Scouts, and on Friday, we analyzed President Trump’s pre-emptive pardons.

If you’re looking for a weekend binge, our Podcast Club recommends “Tom Brown’s Body,” a true-crime series about the mysterious disappearance of one teenage boy in Texas. And for a little delight, here’s a video of the host Michael Barbaro responding to Sho Shibuya’s artwork of The Daily.

A reporter’s diary from a food pantry 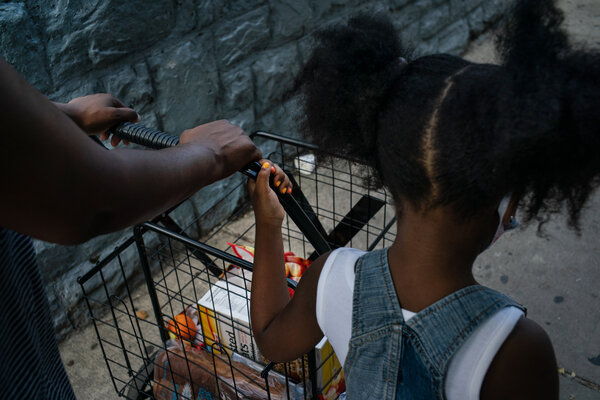 In last Wednesday’s episode, Nikita Stewart, who covers social services for The New York Times, took us through a day at a food pantry in Brooklyn. She introduced us to some of the food bank’s many clients: an unemployed single mother with a baby on the way, a teenage boy whose parents had been laid off from work and a woman hoping to collect healthy food for her children.

Moved by the familiarity of their experiences, Nikita decided to join the chorus of diverse voices by sharing her own story in the episode:

I enjoy the anonymity of journalism. We write the story. We report the story. We are not the story. But I’m a human being with feelings and experiences that inform my reporting. My emotions and memories of the way my family went in and out of poverty spilled over in a recent episode of The Daily.

On a Friday in September, I stood outside a food pantry operated by Council of Peoples Organization, or COPO, with the producers Stella Tan and Annie Brown. The line for food stretched around the block in Midwood, Brooklyn, and people had positioned carts on the ground overnight to save their places in line.

I had seen lines like that before. I’d spoken in the past to plenty of people who use pantries. But that day, we met a woman who told us it was easier to be in the line because she was wearing a mask, and no one would recognize her. She said she was also comforted by the length of the line — evidence she was not alone.

Turning away, I lost it right there, happy to have been wearing glasses to hide the tears welling in my eyes.

Later, as I recounted the day with Stella and Austin Mitchell, another producer, I offhandedly talked about my experience with food insecurity as a child. They asked me, though not wanting to push, if I would be willing to share my thoughts with listeners.

I was torn. As I said, I don’t like to make myself the story. But then I remembered the time I’d spent with a troop of Girl Scouts. For more than a year, I worked on a book about Troop 6000, formed in a homeless shelter in Queens. I asked the Scouts, their troop leaders and their parents to share intimate details about themselves at the most difficult times in their lives. I also watched girls evolve from being ashamed about their homelessness to openly explaining the obstacles and injustices of poverty.

Ultimately, I decided to share my stories of food stamps, free lunch and food insecurity. As I said in the episode, if we all keep this secret of poverty, past or present, it creates a stigma where there shouldn’t be one. If we talk openly, we can do something about it.

Answering your questions about the vaccine rollout

Many of you wrote in with questions after Monday’s episode on vaccine distribution. So we decided to check back in with Carl Zimmer, a Times science reporter whom you may remember from our kids’ episode on the coronavirus. In that episode, he offered answers to many of your concerns. Below, he does it again:

Q: How long is vaccine-induced immunity to the coronavirus expected to last?

Carl: We don’t know yet because this disease is still so new. People who have recovered from Covid-19 appear to keep having a strong immune response against the virus months later, suggesting immunity might last years. Vaccine immunity would most likely do the same. So we might need just one vaccination, we might need a booster later or we might need seasonal shots as we do for the flu. We just don’t know which yet.

Q: What’s the status of vaccines being developed outside the U.S.?

Carl: The New York Times’s coronavirus vaccine tracker has all of the information we know of about vaccine projects worldwide. There are 58 vaccines in clinical trials around the world, in countries including Thailand, Italy, India, Japan and Australia. China alone has five late-stage clinical trials, some of which should be delivering efficacy data soon.

Q: To what extent will children be vaccinated? Have they been included in any clinical trials?

Carl: Trials for children are beginning. Pfizer has started one for kids as young as 12, and other companies are moving to start their own. They should take a few months to deliver results.

Q: If you’ve already had Covid-19, do you need the vaccine? Where does this group rank in the distribution timetable?

Carl: Those are great questions. Government health officials will have to make a decision about those issues. Clinical trials did not exclude people who already had the virus, so researchers will be able to look at their outcomes to see if it’s safe and effective in them, too.

That’s it for The Daily newsletter. See you next week.

Have thoughts about the show? Tell us what you think at [email protected].

Were you forwarded this newsletter? Subscribe here to get it delivered to your inbox.

Check out all of the podcasts from The New York Times.