Yesterday was another sunny day in Los Angeles, which meant that it was the perfect time for paparazzi to capture more photos of Jennifer Lopez and Ben Affleck together. The couple was spotted yesterday sitting in Los Angeles traffic with Affleck behind the wheel of the car and Lopez tilting her head back and relaxing. While the traffic on iconic Sunset Boulevard may have been a frustration for each and every driver, Affleck made the most of it by glancing affectionately over at Lopez while her eyes were closed. 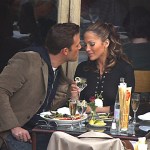 The magic of the moment, however, was interrupted once Affleck and Lopez spotted the paparazzi snapping photos from a nearby car (see Page Six photos here). This is the latest outing for “Bennifer” 2.0 over the course of their recent rekindled romance, which seemingly began back in May after an excursion to Montana. While the couple’s romance appears to be moving along pretty steadily, there have been some major milestone moments in this new iteration of their relationship.

Days before he was stuck in LA traffic with Lopez, Affleck was seen out with the singer’s twins, 13-year-old Max and Emme, along with two of his children with ex Jennifer Garner, Seraphina, 12, and Samuel, 9. Affleck was in charge of the whole operation, as the quintet spent their day roaming around Universal CityWalk. Despite Lopez not being present, it was definitely clear that she is completely serious about her renewed romance with Affleck.

Not only has the couple been taking major steps in their romance, but it seems like this new and improved version of their relationship is something that is really working for Lopez, too. “Ben is a guy’s guy and does his own thing, which J.Lo loves,” a source previously told Entertainment Tonight.

“He has his own life and is famous in a different way than she is and is not trying to compete with her by any means,” the source shared. “They just support and love each other.” Indeed, Affleck and Lopez are in completely different points in their respective lives and careers compared to nearly 20 years ago. At that time, the media attention was a lot for the high-profile stars to handle, ultimately contributing to their breakup in early 2004. But now? Not even a photog near their car window snapping some shots in L.A. traffic can get to the couple.

Before you go, click here to see celebrity couples who famously broke up and got back together.