Home » Entertainment » Blake H. Was 'Close' to Joining the 'BiP' Cast: Why He Decided Not to Go

Blake H. Was 'Close' to Joining the 'BiP' Cast: Why He Decided Not to Go

Not quite paradise. Blake Horstmann may have brought the drama to Bachelor in Paradise season 6, but fans shouldn’t expect to see him back on the beach this summer.

‘Bachelor in Paradise’ Season 7: Everything We Know So Far

The season 14 Bachelorette alum, 32, fielded questions from his Instagram followers during a Q&A on Thursday, July 1, and had some strong words about his choice not to be part of BiP season 7, set to premiere in August.

“Well I might as well address this lol,” he wrote in his Instagram Story response. “Ya know it was close. I went through some testing etc. but at the end of the day, I didn’t feel it was right for me.” 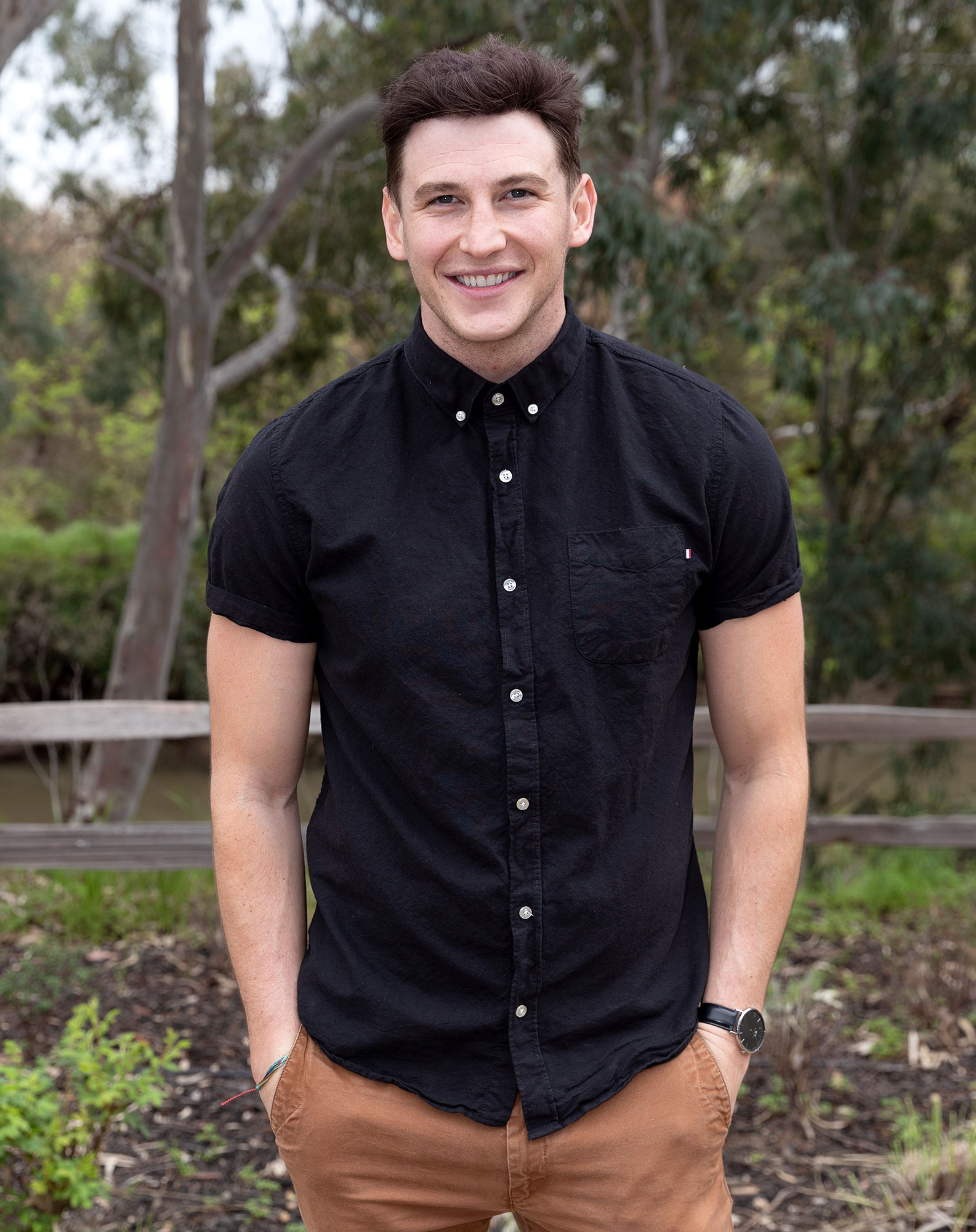 The Colorado native continued, “I am in a good place in my life. Personally, professionally and mentally. I didn’t want to go back into an environment that breeds toxicity and emotional abuse. I didn’t want to put my life in the hands of people that don’t really have your best interest in mind. It’s like having a coach who pushes you to do the wrong things 😂.”

Horstmann claimed that the experience is “just not for me,” adding, “I decided my mental health was more important than some followers and engagement, but I absolutely do not think there is anything wrongs with people who do go on the show.”

When another fan wondered whether it felt “hard being yourself after the show,” the reality star continued his candid streak. “Yes it’s alot [sic] harder than people think. Everyone wants you to be the person you were one [sic] the show and that’s not always the case. … I often say you kind of become who you were edited to be.”

Just Friends? Everything Becca and Blake Have Said About Their Relationship

On season 6 of the ABC dating show spinoff, which aired in summer 2019, Horstmann found himself at the center of the drama — both on and off the screen — with costar Caelynn Miller Keyes. While the show was airing, he released screenshots of their pre-production text messages, one of which showed them arranging to hook up at Stagecoach Festival one night after he had sex with fellow contestant Kristina Schulman.

“I don’t regret it. I’ll never really apologize for that,” Horstmann told Us Weekly in March on the “Here for the Right Reasons” podcast. “I’m never gonna regret [or] apologize for defending myself.” 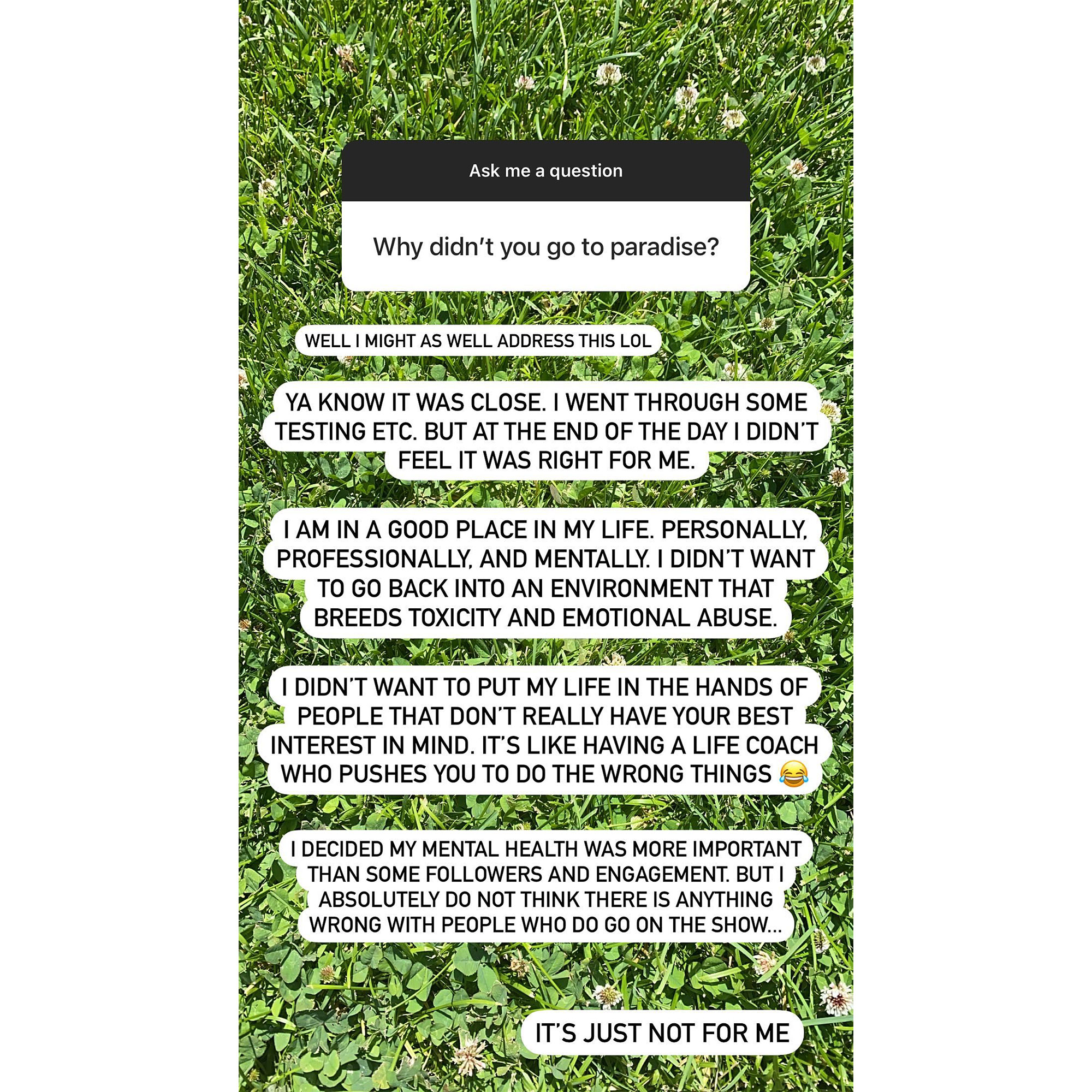 Filming any of the franchise’s shows puts contestants in “such a crazy environment,” where they’re forced to “build a relationship with your producer or producers,” he told Us. “In that environment, you have nobody else to lean on. [You’re experiencing] lack of sleep, you’re not eating right, you’re drinking. It’s very emotional and is easier to get manipulated in that environment, obviously, than in your regular life.”

However, he said contestants shouldn’t put the blame on production for their antics. “But at the end of the day, the decisions you make are your own, they can’t make you do anything,” he added. “Now, it is scary in editing when that they can frankenbite and they can take words that you’d say at different times and put that together. And that is super scary. … [But] I can’t be like, ‘They forced me’ because they didn’t.”

While he may not be returning to Paradise any time soon, Horstmann would still encourage people to shoot their shots on the ABC dating series.

Every Time ‘Bachelor,’ ‘Bachelorette’ Contestants Have Called Out Producers

“I always say it’s high risk, high reward,” he replied to a follower on Thursday. “You can go have an amazing time and everything that comes with that or you can have a horrible time and be f–ked up for life. At this point it’s no secret what this show is capable of. Do your research and know what you are getting into.”

He concluded, “I still don’t regret it even after everything. But I know alot [sic] of people who do.”

Bachelor in Paradise premieres on ABC August 16 at 8 p.m. ET.