Broadway’s “Waitress” offered a special homage to one of its original cast members when it reopened this week after an 18-month closure.

Actor Nick Cordero, who originated the role of Earl in “Waitress,” died in July 2020 following a monthslong battle with COVID-19.

At the reopening performance of “Waitress” on Thursday night, Sara Bareilles welcomed Cordero’s wife, Amanda Kloots, to the stage for an impromptu singalong of “Live Your Life,” Cordero’s 2018 pop-rock single and the title track of his debut solo album, released on what would have been his 41st birthday last year.

Cordero had only recently begun to perform the song live in concert before testing positive for the coronavirus.

Watch the “Waitress” cast perform “Live Your Life” below.

“He is still a beautiful spirit and a beautiful soul, and we hold him very near and dear to our hearts,” Bareilles, who wrote the music for “Waitress” and stars in the current production, said of Cordero.

Moments later, the Grammy winner praised Kloots for having “walked through this terrible time with so much grace and so much wisdom and so much vulnerability.” 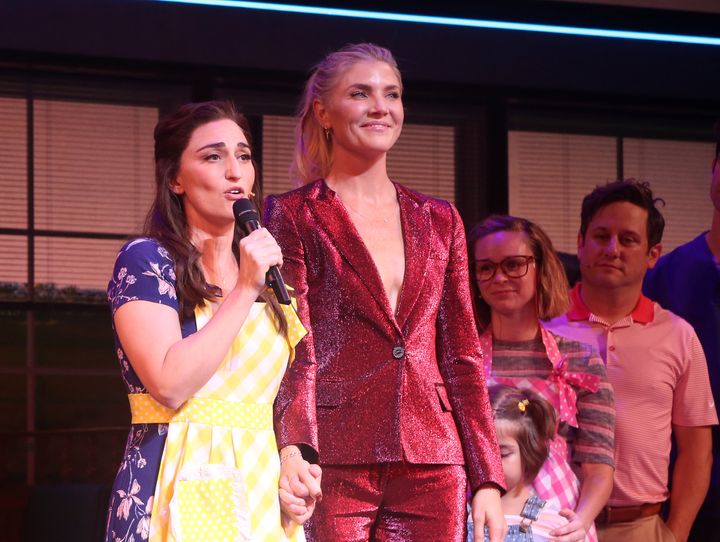 Prior to reopening, “Waitress” unveiled an onstage menu board last week featuring a “Live Your Life” pie in honor of Cordero.

“This week, we honored the memory of our beloved cast member Nick Cordero,” the “Waitress” team wrote in a caption accompanying the photo. “This special pie name, and moment in the show, will be a permanent part of every ‘Waitress’ production in the world.”

Kloots shared footage of her 2017 wedding to Cordero on Friday to commemorate what would have been the couple’s fourth wedding anniversary.

“I’ll never forget our first look, our first kiss as husband and wife and our first dance,” she wrote. “You’ll always be my husband, my angel now, but always the love of my life. Here’s to us.”

All 41 Broadway theaters abruptly closed in March 2020 to curb the spread of COVID-19. The ongoing shutdown has led to an estimated loss of $35 million per week.

In July, the Broadway League announced that all 41 of the Great White Way’s theaters will require all audience members, performers, backstage crew and staff to be fully vaccinated or present a negative COVID-19 test. At present, the policies will remain in effect through at least Oct. 31.