Brooke Shields is speaking out about her controversial interview with Barbara Walters once again. When the actress and model was only 15, Walters continually pressed Shields about her sexual history and even stood side-by-side with the 15-year-old to compare body sizes. The 1981 interview is nothing short of cringe-inducing in retrospect, and unfortunately, this isn’t the only time the award-winning journalist pressed Shields on topics she was uncomfortable with.

During an appearance on The Drew Barrymore Show, Shields brought up a couple of the controversial interviews she underwent as a teen actor, including the 1981 Walters one, per ET. “She asked what my measurements were,” Shields explained as the crowd murmured in disapproval.

“And she asked me to stand up, and I stand up, and she was like, comparing herself to this little girl! And I thought, ‘This isn’t right, I don’t understand what it is,’ but, I just behaved and I just smiled and felt like, so taken advantage of, you know, in so many ways,” the actress explained.

Barrymore and Shields also discussed the impact of social media on younger people, noting how Lindsay Lohan recently said that she wished she had social media as a young actor so she could control her own narrative.

Shields, however, doesn’t feel like social media would have helped her navigate the awkward and inappropriate interviews she navigated as a teen model. She acknowledged that the move might have been right for Lohan, but for her, “as a young person I couldn’t have handled the vitriol and the commenting and the opinions so [in] my face all day long. I think my heart would have just kind of been broken,” she explained. 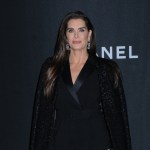 Still, given what she had to deal as a young teen with a meteoric rise to fame, it seems like Shields handled herself with grace — and is doing her part to make sure younger people everywhere do not have to deal with the hardships she did as a teen.