Dodie — the English songwriter Dorothy Miranda Clark — uploaded her first original song, “Rain,” to YouTube in 2011. “I’ve loved attention ever since I was a kid,” she said on a video call from her home in London. Connection has been a driving force in her life ever since.

By the mid-2010s, Dodie (her childhood nickname) had secured a loyal, voluble audience as both a songwriter and vlogger — or videoblogger, lately renamed a “creator” — on YouTube. Her three independently released EPs went on to reach the British pop charts, and she has had multiple tours of the United States, Europe, even Australia. Her main YouTube channel now has nearly 2 million subscribers; she maintains a second one for more informal videos. And on May 7, her debut album, “Build a Problem,” will arrive a decade after Dodie established her presence online.

Through her laptop camera, Dodie, 26, gave a 360-degree tour of her bedroom studio, with acoustic and electric guitars, ukuleles of various sizes and a cello (though she doesn’t play it) hanging on the walls. A keyboard, a marimba she recently rescued from the trash and a clarinet — her elementary-school instrument, which appears often on “Build a Problem” — were within easy reach.

Dodie’s songs radiate transparency. They’re usually built on plucked, syncopated patterns from her guitar or ukulele, threaded through with melodies that she sings barely above a whisper, often confiding her vulnerabilities. “You let the feelings overwhelm you and then you find neat little phrases to sum them up,” she explained in her 2017 memoir, “Secrets for the Mad: Obsessions, Confessions and Life Lessons.”

While her lyrics are full of self-doubt and second guesses, her music is precise. Orla Gartland, an Irish songwriter, has toured with Dodie as an opening act and a band member; they now live in the same London neighborhood and are part of a quarantine pod that shares video mash-ups of their songs. “She’s just good at standing up for herself in a way that’s really important,” Gartland said in a phone interview.

“She understands harmonies in a way that she comes up with these really complicated and amazing vocal arrangements,” she added. “She can read music, she can score it all out. There’s this real kind of determination in her, which is cool.”

When recording, Dodie calibrates every note. “You can look at a song and look at the structure and notice how it flows to create a feeling,” she said. “I’ve been told before, like, ‘Oh, it needs drums,’ or, ‘Can you add a verse?’ And I’m like, ‘No, I wrote this. I’ve like built this pattern in a way that is mine.’ It’s not like Lego blocks.” 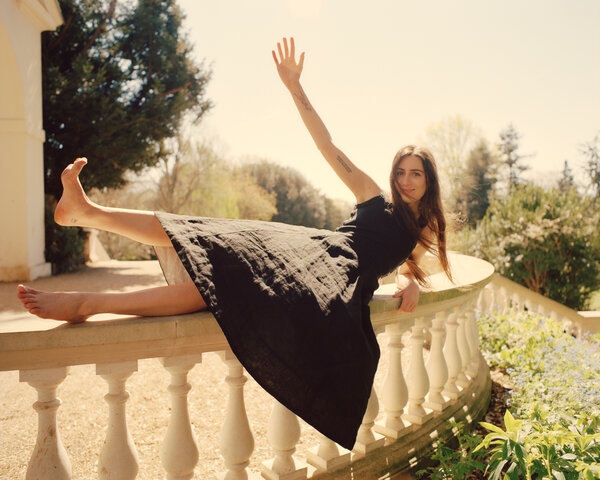 Like many songwriters in the social-media era, Dodie often unveils new songs in skeletal, one-take video form — some to return as finished studio tracks, many others to linger unpolished online. “I can’t help it,” she said. “I want to share things now — to finish a song and then get that instant gratification of sharing it. That is my instinct now, soothing that itch for immediate validation.”

Music is only part of Dodie’s copious online content. In homemade videos, along with occasional professional productions, she has not only revealed her songs but also offered up her insecurities, her enthusiasms, her self-care regimens, her frustrations, her bloopers, her giggles, her knitting, her career advice, her high-school grades, her sexuality, her mental-health struggles, her sniffles from the flu and her tears.

“What’s terrifying, like panic-inducing, is how I can’t take it back now — none of it,” she said. “I want to share, and I don’t know where that comes from. Maybe it’s that I love empathy. I want to spread the idea that — I’m convinced that — everyone could be empathetic if they are shown it.”

For the teenage Dodie, YouTube was an obvious outlet. She took drama and music classes in school; she had her own camcorder. YouTube also beckoned with a career path. At 15, Dodie was avidly following many vloggers, among them Charlie McConnell, known as charlieissocoollike. After she panicked at a meet-and-greet, she wrote and uploaded an awkwardly earnest song about fame: “Even though I know you like you’re mine/I’m a stranger to you, a fan who screams all the time.” He responded, drawing traffic to her fledgling YouTube channel. By 2015, she was duetting with him.

As Dodie’s own audience grew, she was responding directly to as many comments and fan messages as she could, trying to live up to the compassion in her songs, until her snowballing audience made that impossible. She was dealing with everything that teenagers face: high school, romance, finding an identity. She was also writing songs and constantly facing the camera. In 2016, she felt pressure to support her family and she took on sponsorship deals that demanded ever more content.

It was too much. She had already had bouts of depression; in the spring, she had a complete breakdown. She briefly stopped appearing online. Friends, family and eventually therapy helped her pull through, and in November 2016 she released her debut EP, “Intertwined.”

Yet ever since, she said, she has been dealing with what she calmly calls her “bad brain.” Although she presents a buoyant persona, Dodie often experiences depersonalization, feeling unreal or separate from her body; she spaces out. But she continues to share.

“There’s a way in which I can see what has happened in my life as some twisted, sick joke,” she said. “It’s terrifying to go through everything that life brings with the added weight of eyes — so many eyes, and young eyes, and strangers. And then other times I’m obviously like, ‘My God. I got exactly what I wanted and it’s brilliant, it’s so fun.’”

Her growing audience made her rethink her songwriting. “I write very in-depth, dramatic songs. But then I play live and I feel the joy of playing an upbeat song,” she said. “I battled with which one I was: am I a sort of folk, indie singer songwriter in my bedroom? Or poppy? I like both, I like the mixture. I really liked the idea of a song with a darker theme that is just so poppy.”

Her initial plan was to make the album as a suite of dovetailed songs; its second half, beginning with “Rainbow,” still does that, complete with instrumental interludes as transitions. (One of her videos shows her constructing an interlude by singing over the drone of an electric toothbrush; there’s no toothbrush in the final mix.) And along with her home-recorded tracks, she brought in a 13-piece string section, recorded in a professional studio before the pandemic.

In “Hate Myself,” Dodie sings, over a subtle Bo Diddley beat, about blaming herself for every gap in communication. In the delicately propulsive “Rainbow,” she embraces recognizing the “rainbow” of bisexuality to transcend a homophobic upbringing. And in “Guiltless,” she sings about being burdened forever with someone’s thoughtless revelation: “You opened a door that a kid shouldn’t walk through,” she sings. “I’m not bitter, I’m just tired/No use getting angry at the way that you’re wired.”

“Build a Problem,” largely recorded in 2019, will arrive after multiple Covid-19 and Brexit-related delays. In February, Dodie uploaded a song about the album’s first postponement, a slyly wistful waltz that rhymes “an unfortunately nasty fusion” with “vinyl distribution.” Last year, with the album substantially finished, Dodie spent the isolation of quarantine to write more songs; in April 2020, she pushed herself to put many of them online for what she called “Alosia”: “A lot of songs in April.”

Seven of those demos will be added to a deluxe version of the CD and to its online release, and Dodie still left behind some other 2020 standouts, like “A Song I Wrote About Twitter,” which begins, “Here I am, just another shout into the dark.”

Social media has shaped, nurtured and promoted Dodie; she’s fully aware of the pitfalls. “Right now on the internet, the comment section is like a fire happening in another room,” she said. “You just have to close the door and hope it doesn’t spread. And every now and again, you’ll go and check on it.”

But so far, she has found a sense of community onscreen. “I’m afraid to be lonely and I’m never lonely,” she said. “I spent so much of my life as a child feeling weird and gawky. And now I’m in a group of weird and gawky people who are wonderful, and it makes me feel wonderful.”

Right after the interview, she’d be making her next video.