Douglas Turner Ward, an actor, playwright and director who co-founded the celebrated Negro Ensemble Company, a New York theater group that supported Black writers and actors at a time when there were few opportunities for them, died on Saturday at his home in Manhattan. He was 90.

The death was confirmed by his wife, Diana Ward.

Mr. Ward was establishing his own career as an actor in 1966 when he wrote an opinion article in The New York Times with the headline “American Theater: For Whites Only?”

“If any hope, outside of chance individual fortune, exists for Negro playwrights as a group — or, for that matter, Negro actors and other theater craftsman — the most immediate, pressing, practical, absolutely minimally essential active first step is the development of a permanent Negro repertory company of at least Off-Broadway size and dimension,” he wrote. “Not in the future … but now!”

The article got the attention of W. McNeil Lowry, the Ford Foundation’s vice president of humanities and the arts, who arranged a $434,000 grant to create precisely the kind of company that Mr. Ward was proposing. Thus the Negro Ensemble Company was born, in 1967, with Mr. Ward as artistic director, Robert Hooks as executive director and Gerald S. Krone as administrative director.

The company went on to produce critically acclaimed productions, among them Joseph A. Walker’s “The River Niger” (1972), which won the Tony Award for best play in 1974 and was adapted for film in 1976. Mr. Ward not only directed the play but also acted in it, earning a Tony nomination for best featured actor in a play.

Other notable productions by the company included Samm-Art Williams’s “Home” (1979) and Charles Fuller’s Pulitzer Prize-winning drama “A Soldier’s Play” (1981), with a cast that included Denzel Washington and Samuel L. Jackson; it was also adapted for film, as “A Soldier’s Story” (1984).

The company became — and continues to be — a training ground for Black actors, playwrights, directors, designers and technicians. Many of the troupe’s actors over the years went on to become stars, among them, in addition to Mr. Washington and Mr. Jackson, Angela Bassett, Louis Gossett Jr. and Phylicia Rashad. 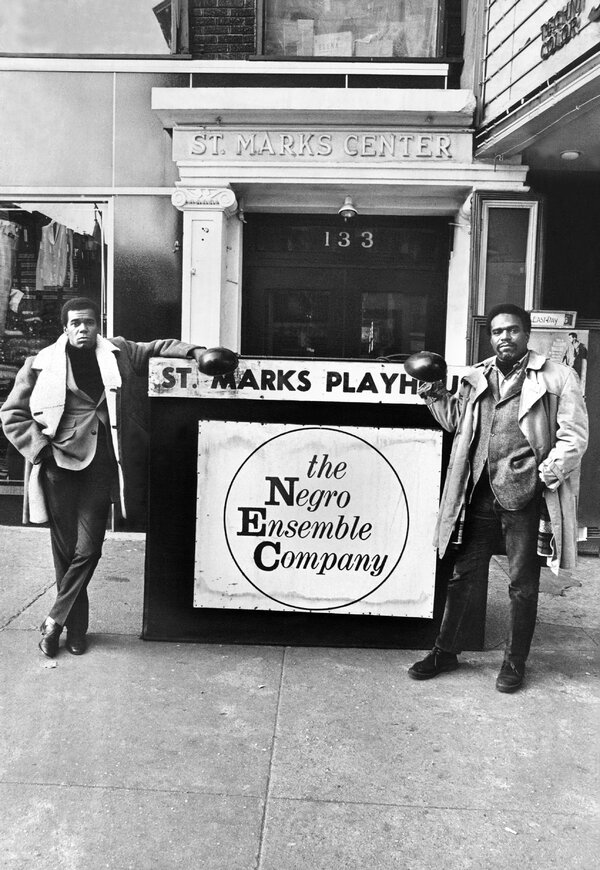 The company, and Ford’s contribution, won immediate praise after its founding. The Rev. Dr. Martin Luther King Jr. said the grant represented “a magnificent step toward the creation of new and greater artists in the community,” and Roy Wilkins, the executive director of the N.A.A.C.P. at the time, said the foundation had “recognized the potential in the Negro theater” and the talent of “hundreds of actors and entertainers who have struggled individually.”

The Negro Ensemble Company enabled Mr. Ward to solidify his own career as an actor and director.

“I love acting for the communal thing — you know, working with people,” he said in an interview with The Times in 1975. But directing, he added, “sort of happened to me.”

“I never had any intention of functioning as a director,” he continued, “but as the artistic director of the company, I choose the plays, and if I can’t find someone to direct them for us, I do it myself.”

One of the first plays he directed was Richard Wright and Louis Sapin’s “Daddy Goodness” (1968), about a town drunk in the rural South who falls into such a stupor that his friends think he is dead.

Three of the many productions he directed transferred to Broadway, including in 1981 “A Soldier’s Play,” about a Black officer assigned to investigate the murder of a Black sergeant at a Louisiana Army base during World War II, a time when the armed forces were segregated. Frank Rich of The Times called it “a superlative production, lyrically linking the drama’s time-leaping scenes as well as capturing its period flavor and barracks humor.”

(The play was revived last January on Broadway, starring Blair Underwood, before being forced to close because of the pandemic.)

In an interview, Mr. Fuller said, “Doug is the only director I have worked with that could read any play and know whether its story line and characters would ‘work’ onstage.”

The Negro Ensemble Company was not immune to criticism, however. The founders were criticized early on for setting up their headquarters at the St. Mark’s Playhouse in Manhattan’s East Village rather than at a theater in Harlem, and for appointing a white administrator, Mr. Krone. (He died last year at 86.)

Roosevelt Ward Jr. was born on May 5, 1930, in Burnside, La., to Roosevelt and Dorothy (Short) Ward, impoverished farmers who owned their own tailoring business. His family moved to New Orleans when he was 8, and he attended Xavier University Preparatory School, a historically Black Roman Catholic institution.

Mr. Ward was admitted to Wilberforce University in Ohio in 1946, then transferred to the University of Michigan at Ann Arbor, where he studied politics and theater. He quit college at 19 and moved to New York City, where he met and befriended the playwrights Lorraine Hansberry and Mr. Elder.

In the late 1940s, Mr. Ward joined the Progressive Party and took to left-wing politics. He was arrested and convicted on charges of draft evasion and spent time in prison in New Orleans while his case was under appeal. After his conviction was overturned, he moved back to New York and became a journalist for the Communist Party newspaper The Daily Worker.

He also began studying theater, joining the Paul Mann Actors Workshop and choosing the stage name Douglas Turner Ward, in homage to two men he admired: the abolitionist Frederick Douglass and Nat Turner, who led a revolt against slavery.

One of Mr. Ward’s first acting roles was in Eugene O’Neill’s “The Iceman Cometh” in 1956 at Circle in the Square in Manhattan; another was as an understudy in Ms. Hansberry’s “A Raisin in the Sun” on Broadway in 1959, with Sidney Poitier and Claudia McNeil in the lead roles.

He also began developing as a playwright. In 1965, an Off-Broadway double-bill production of his satirical one-act comedies “Happy Ending” and “Day of Absence” became a hit, bringing him a Drama Desk Award for outstanding new playwright. Surviving a transit strike, the production ran for 15 months.

Mr. Ward had lead roles in many plays, including “Ceremonies in Dark Old Men,” for which he won the Drama Desk Award, and “The Brownsville Raid,” about an incident of military racial injustice in a Texas town. Clive Barnes, reviewing “Brownsville” for The Times, wrote “Ward, who, to be frank, I usually admire more as a director than an actor, has never been better.”

Among his many awards and honors, Mr. Ward received the Dr. Martin Luther King Jr. Humanitarian Award. In 1996, he was inducted into the Theater Hall of Fame.

He continued to write into his later years. Last March, he published “The Haitian Chronicles,” a series of three plays that he had been working on since the 1970s, all centered on the Haitian Revolution, which threw off colonial rule in the early 1800s. His wife said that he had considered the project his magnum opus and that she and others were hoping to have the plays staged in New York with alumni from the Negro Ensemble Company.

In addition to Ms. Ward, whom he married in 1966, he is survived by their two children, Elizabeth Ward-Cuprill and Douglas Powell Ward, and three grandchildren.

At the Negro Ensemble Company, Mr. Ward often played matchmaker in connecting actors to roles, seeking out opportunities for people whom he knew had not been getting much work.

“Doug never saw N.E.C. as a place to feature himself,” the playwright Steve Carter, who was a production coordinator for the company, said in a phone interview for this obituary in 2017. “He was always looking for new people.”

Mr. Carter, who died last year, said Mr. Ward had been known for his willingness to step into any role in which he was needed. He recalled in particular a 1972 production of “A Ballet Behind the Bridge,” by the Trinidadian playwright Lennox Brown. With the actor Gilbert Lewis unable to appear one evening, Mr. Ward was hastily summoned to fill in.

“Doug went on with script in hand,” Mr. Carter said. Then Mr. Ward actually injured his hand on the set and began bleeding profusely, but he refused to go to the hospital until he had finished the show.

“He would always do what was necessary for N.E.C.,” Mr. Carter said.