“Friends: The Reunion” director Ben Winston has revealed how the show’s emotional opening sequence was nearly ruined by a production blunder.

In an interview with The Times, Winston explained how he wanted the six actors’ first meeting for the special to take place on the original soundstage at the Warner Bros studios in California.

However, the show ran into problems when the cast’s six trailers were positioned right next to each other on the lot.

“I was so upset,” Winston admitted. “The point of the show is they haven’t seen each other. But it was too late to move them.” He revealed that the team quickly thought on their feet to keep their original plan intact.

“We built tents around each of their doorways,” Winston recalled. “And I texted the six of them and said, ‘Look, I know you want to see each other but I’m begging you: please stay in your own dressing room until you’re called to the stage. I really want to catch that moment.’”

The cast had their fun teasing Winston though, as he added: “They were, like, ‘What do you mean? We’re all in the car on the way here together.’ ‘Jen, will you pick me up a coffee?’ ‘Oh, I’m already outside your house.’ And then Matt [texted] ‘I’m already in bed with David.’

“They mocked me for wanting that moment. But they did do what I asked. And you do get the feeling that they haven’t seen each other for ages. And it’s a really beautiful moment. I’ve never seen a bond like these six have.” 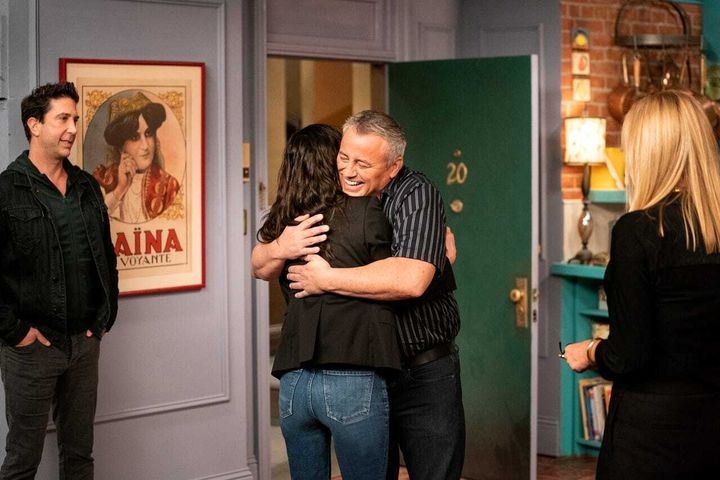 Lisa Kudrow previously revealed her favorite moment from the reunion actually took place in this part of the show – even if it did pass her by at the time.

She said it was only when David Schwimmer pointed it out to her when they watched the episode back together that she realized what had gone on.

Speaking to E! News, Kudrow said: “Courteney [Cox] comes in and bursts into tears. And then, I grab a napkin, or a tissue [and Matt] LeBlanc takes it, because he’s telling a story and doesn’t want to skip a beat, and starts dabbing her eyes, just on automatic.”