BERLIN — Theatergoers know what to expect from a Frank Castorf production. The director, who helped shape the last 30 years of German theater, favors a deconstructive approach to the classics, reams of dialogue barked like manifestoes and manic performances over a marathon running time.

All these Castorf hallmarks — and others — are on display in “Fabian, or Going to the Dogs” at the Berliner Ensemble, but they can’t help but feel old hat, especially when viewed alongside premieres from some of Germany’s most distinctive young theater artists.

Scheduled to premiere in spring 2020, but delayed by the pandemic, “Fabian,” at five hours, is roughly two hours shorter than initially expected. I’m glad that the director, who is 69, used the extra rehearsal time to trim some fat. Perhaps the former enfant terrible has mellowed with age.

Castorf ran the Berlin Volksbühne for 25 years before being fired in 2017, and this is his third production at the Berliner Ensemble since. It was loosely inspired by Erich Kästner’s 1931 novel about Berlin’s infernally decadent tailspin in the years before the Nazi takeover, but aside from some period details in Aleksandar Denic’s intricate set, there is little Weimar flavor to the production.

Instead, Castorf treats the audience to a grim parade of high-octane acting and complicated, often messy, stagecraft that doesn’t seem to refer to anything outside itself.

In typical Castorf style, there’s an off-kilter stage that rotates nonstop and actors performing out of sight and captured live via video. The show also features many of the director’s signature props, including gallons of stage blood (for bathing) and potato salad (for dancing in).

Probably many of the graying spectators seated in the theater saw Castorf’s revolutionary productions in their youth. But by this point, he’s gone from legend to relic. I found myself wondering (and not for the first time) if his once radical brand of deconstructive theater is now an aesthetic dead end.

As often with his work, one detects a strong misogynistic undercurrent, with female characters brutalized or presented as sexually available objects of gratification. So it was refreshing to see the cast’s five actresses transcend their limited roles by giving self-assured performances, especially the Russian-born Margarita Breitkreiz, who projected a feverish intensity, and the young French actress Clara De Pin, who recited Baudelaire and crawled into the audience as part of her physically adroit, courageous performance.

Castorf’s quarter-century tenure at the Volksbühne was without parallel in modern Berlin theater history, but Thomas Ostermeier’s 21-year reign as the head of the Schaubühne comes close. “Vernon Subutex 1” is this 52-year-old director’s 41st show at the theater, and it suggests that Ostermeier’s verve-filled productions, which place a more traditional emphasis on the author’s text and on acting, may also be losing their bite. 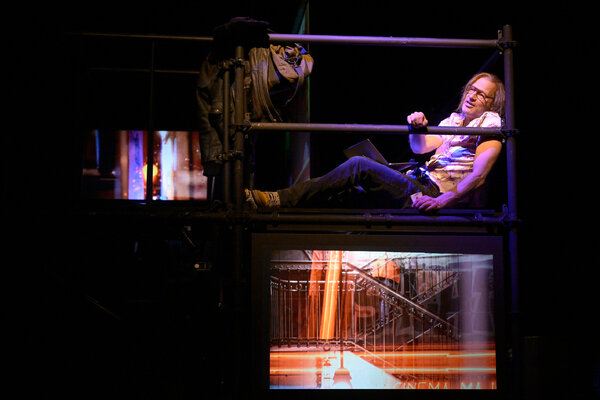 “Vernon” is drawn from the French author Virginie Despentes’s kaleidoscopic trilogy of novels about contemporary French society. Published between 2015 and 2017, the books quickly became a pop cultural phenomenon and earned the author comparisons to Balzac. They have inspired numerous stage adaptations and deserve to be better known in the United States, where the final volume was recently published.

The cycle’s title character is a down-on-his-luck former record store owner who embarks on an odyssey through Paris after he is evicted from his apartment. The Schaubühne production is largely faithful to the structure of the novels, where a large cast of highly opinionated characters narrate the chapters in a dazzling merry-go-round of storytelling. But what’s so alive and fresh on the page falls flat here, especially given Ostermeier’s dutiful expository approach and the show’s four-hour length.

Despite some inspired performances — particularly from Joachim Meyerhoff as Vernon and Stephanie Eidt as the ex-groupie Sylvie and the reputation-destroying Hyena — the hours drag by. An onstage band, fronted by Taylor Savvy, performs at the earsplitting volume typical of Broadway musicals and is unable to ignite the dramatic spark missing from the production.

Like “Fabian’s,” “Vernon’s” premiere was repeatedly delayed by the pandemic. Finally onstage this summer, they arrived around the same time as plays by young German directors who have been reared on a steady diet of Castorf and Ostermeier.

The first thing you notice about productions by Ersan Mondtag, one of this group, is their visual flair. He designs his own sets (and sometimes the costumes), which frequently recall German Expressionism or Pee-wee’s Playhouse, while his actors perform with the mannered rigor favored by Robert Wilson.

Surprisingly, the music is one of the less exciting parts of the show, in which Wagner’s gods, dwarves and hapless humans cavort in an oversize kitchen. Or perhaps the set is a collective delusion created by Wotan, the head god, who keeps everyone confined to an asylum.

Following the general contours of Wagner’s tetralogy, Köck’s version seems inspired by “Rein Gold,” the Austrian Nobel Prize-winner Elfriede Jelinek’s Marxist deconstruction of the “Ring.” Köck also puts an environmental gloss on the epic, while interrogating the nature of myth and history.

Like “Fabian” and “Vernon Subutex,” this production lasts more than four hours. And though it does drag here and there, it never did when Stefanie Reinsperger’s Brünnhilde or Corinna Kirchhoff’s Wotan was onstage.

In late June, Mondtag had three new shows running in Berlin, including his first dance piece, “Joy of Life.” Next season, he is scheduled to make his debut at Deutsche Oper Berlin with a staging of Rued Langgaard’s “Antikrist.”

Like Mondtag, Pinar Karabulut, 34, is one of today’s most pointedly idiosyncratic young German theater directors.

“The Leap From the Ivory Tower,” at the Münchner Kammerspiele in Munich, feels more mature than some of the director’s other recent productions. At two-and-a-half hours without intermission, it’s a fascinating deep dive into the life and wide-ranging work of the German writer Gisela Elsner, who committed suicide in 1992.

In one striking scene, German children in a bombed-out city play at being concentration camp guards and prisoners. In another, former Nazis set out for a hunt in the Bavarian forest. Later, the writer finds herself attacked by a clueless West German TV anchor during a cringe-worthy interview.

Nevertheless, there is something liberating about Karabulut and Mondtag that audiences here respond to. I’m convinced that we’ll be seeing more of their stylish aesthetic as the once avant-garde provocations of the past become nostalgia-laden chestnuts.

Fabian, or Going to the Dogs. Directed by Frank Castorf. Berliner Ensemble.

The Leap From the Ivory Tower. Directed by Pınar Karabulut. Münchner Kammerspiele.

All shows will return next season.