He Turned the Met Museum’s Collection Into an Orchestra

Walking up the stairs of the Met Breuer last week, the British artist Oliver Beer pressed his face into a corner and began singing a slow succession of descending pitches. When he landed on a B flat, the walls suddenly vibrated with sympathetic resonance.

It’s the same thing that Mr. Beer, 33, has done hundreds of times at the Met over the past few years, but with objects from its collection — vases, pots and sculptures, some of them thousands of years old — rather than the building itself.

He carefully tested these objects in search of the so-called “natural pitches” already present within them because of their geometric properties. The interior of a painted earthenware vase by Joan Miró, for example, resonates as a low F.

“I was able to listen first,” Mr. Beer said in an interview, “and then, very gently, to sing to one side, without my breath going near.” By tuning his voice to the resonance of the individual objects — as he did with the Met Breuer’s stairwell — he was able to confirm the pitch each one was best able to “sing.” 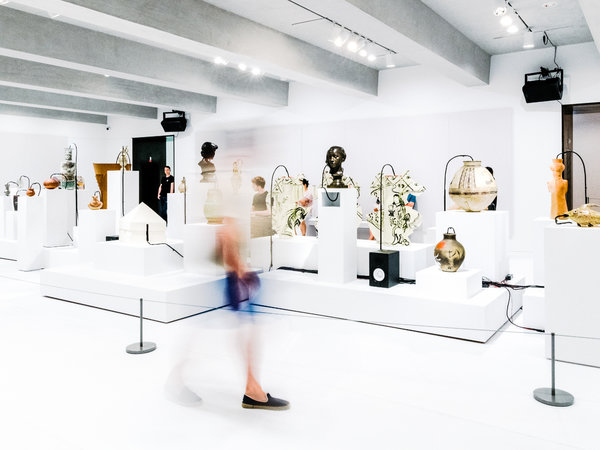 He ended up with an ensemble of 32 objects, which together form “Vessel Orchestra,” currently on view — and audible — through Aug. 11, the first sound-based installation to be commissioned by the museum. Linked, by microphones, to a nearby keyboard that’s designed to trigger each individual object (and, therefore, frequency), the array, when properly amplified, is capable of producing the 32 sequential pitches of a well-tempered keyboard.

In other words, thanks to Mr. Beer’s intervention, musicians can “play” the whole setup, like a traditional piano.

Don’t fear for the Met’s possessions; they are not actually struck or directly manipulated. The microphones are carefully suspended above each object, dropping down into openings and crevices without coming into direct contact with the artworks. When a key on the keyboard is pressed, it turns on the microphone in the corresponding vessel, producing what Mr. Beer calls “the live feedback loop of the object.” Then the collection of tones played at any given time is amplified over speakers.

During most of the museum’s visiting hours, “Vessel Orchestra” plays a 20-minute piece composed by Mr. Beer on loop; the notes he has chosen, and his methods of pianistic attack, are already programmed into the keyboard. The resulting tones coming from the objects are amplified, live, as you listen: While it may be a disembodied performance, it isn’t canned or prerecorded. (The effect is something like that of a player piano.)

This piece features nimbly flowing moments in which the microphones elicit delicate passagework, as well as drones dominated by clashing dissonances or hypnotic, sustained chords. On some afternoons, you might catch Mr. Beer or one of his colleagues giving a pop-up performance at the keyboard. And on Friday evenings, there are formal concerts, in which other musicians are invited to make use of the installation.

“My starting point was to interrogate both myself and my collaborators about the earliest fragments of music that they have in their minds,” Mr. Beer said. “It’s almost inevitably from a mother or father or a grandmother.”

His own memory is of the Scottish version of “Black Is the Color of My True Love’s Hair,” which factors into the composition that plays on loop at the Met. 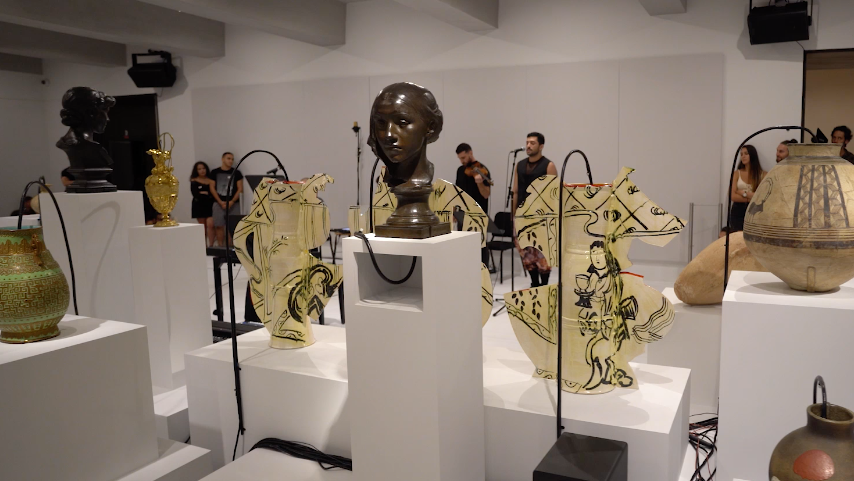 Last Friday evening, the Lebanese indie-rock group Mashrou’ Leila gave a 40-minute show in the installation alongside the writer Rabih Alameddine. They responded to Mr. Beer’s memory prompt by starting out with a sample of the popular tune “Ya Garat Al Wadi,” as performed by the Lebanese singer Nour El Houda in the 1960s.

The performance began with the vocal sample, presented without alteration. Gradually, the members began to use Auto-Tune on El Houda’s voice, in between versions of the group’s own songs. These songs were in turn arranged to work alongside Mr. Beer’s orchestra — with the keyboardist Firas Abou Fakher often employing the low G that emits from the Met’s ceramic 7th-century B.C. human-form vessel, excavated from Iran.

“One of the things that I personally loved most about Oliver’s approach is the idea that these objects — with all their troubled history, and all the bizarre stories that they tell — are, in one way or another, harmonized,” Mr. Abou Fakher said in an interview after the performance.

“People look at these things in museums for hundreds and hundreds of years,” he added. “Their stories have kind of ended when they are put on a shelf. And then what Oliver did was bring them back into this discussion. What is history? What is archiving? How can we use it, how can we keep it as an active part of our process? Not as things that are just put up on a pedestal, not to be touched.”

Next up as guest artists is a series of adventurous, multiply talented musicians including Matana Roberts and Darius Jones (July 19); Nico Muhly (Aug. 2); and John Zorn (Aug. 9). Their styles are distinct enough that the concerts may well have the “Vessel Orchestra” sounding like wholly distinct ensembles.

That broad artistic applicability suits Mr. Beer’s practice. He said that because he works in sculpture as well as sound — and video, too — people often think they have seen a group show after encountering a survey of his pieces. Here at the Met, he has leaned into that ambiguity, offering what amounts to a group show of musical approaches, turning the Met’s collection into an instrument of impressive flexibility.