In a joint interview, Milly Alcock and Emily Carey discussed their now-completed stint in the HBO epic. “We were forced to hang on to each other for dear life,” Alcock said.

Milly Alcock, top left, and Emily Carey will be replaced by older actors in “House of the Dragon.”Credit…Kalpesh Lathigra for The New York Times

They anchored the earliest episodes of one of the biggest shows on television, but Milly Alcock and Emily Carey have no idea what they’re doing next — including whether or not they’ll ever return to the “Game of Thrones” prequel, “House of the Dragon,” in flashbacks or otherwise.

“I don’t even know what I’m doing tomorrow,” Alcock said. “So no idea.”

“I don’t even know what I’m having for dinner!” Carey added.

The performers are at loose ends after originating two of the primary characters in “Dragon”: Princess Rhaenyra Targaryen (Alcock), heir to the Iron Throne of Westeros, and Queen Alicent Hightower (Carey), who hopes her offspring will one day usurp the claim of her one-time best friend. The fifth episode, which aired Sunday, was the end of their tenure; a narrative time jump will see Emma D’Arcy take over as Rhaenyra and Olivia Cooke as Alicent. For Alcock and Carey, it’s a time of uncertainty.

“Me and Emily had this conversation today,” Alcock, 22, said during a conference call from London last week. “We were like, ‘I don’t know what the [expletive] I’m doing any of the time now.’ I’ve been pacing.”

Like the characters they portray, these two actors have been asked to shoulder an enormous burden at a young age. They’ve been crucial components in HBO’s big-budget gamble that fans of “Game of Thrones,” the network’s fantasy phenomenon, would flock to a prequel set nearly 175 years before Daenerys Targaryen was even a twinkle in the Mad King’s eye. But that gamble has paid dividends, and Alcock’s and Carey’s skills in depicting their characters’ complex relationship has been a key to the show’s success.

Where do things go from here? Alcock and Carey are wondering, too.

These are edited excerpts from the conversation. 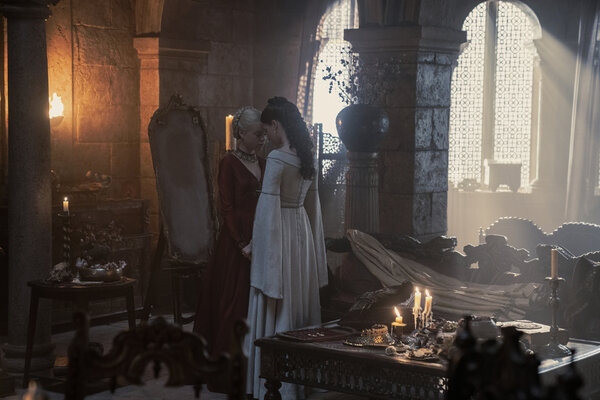 The two of you anchored the first five episodes of the spinoff of the biggest show in HBO history, which has become a huge hit in its own right. How have your lives changed?

MILLY ALCOCK There’s been a great sense of terror, of fear, of excitement. But there’s also been this utterly welcoming reassurance that me and Em have the privilege of being able to do this for the rest of our lives. That’s something that any actor dreams of: having a sense that it’s not all going to fall apart underneath you.

Return to Westeros in ‘House of the Dragon’

EMILY CAREY It’s strange, being visible. For me, that’s the main thing that’s changed: going from being able to blend in, to being seen.

On a fundamental level, this story hinges on Rhaenyra and Alicent. How was their relationship reflected in the relationship between the two of you as actors?

CAREY We’re very lucky in that we get along in real life, so the chemistry came very organically. We’re quite like our characters.

CAREY I’m very type-A, very anxious and very dutiful. I follow the rules. Mil’s a lot more like Rhaenyra in that sense. [Both laugh.] But I see Milly as a big sister, which is different than the characters are onscreen. Still, that closeness you see between Rhaenyra and Alicent is definitely a reflection of ours in real life.

ALCOCK Me and Em went through a very similar experience that our characters went through: We were both thrown into this massive role, and when it actually happened, you don’t know how to react. We’re two very young women who haven’t done massive projects before, in an environment full of men, having to live up to this opportunity. We were forced to hang on to each other for dear life.

CAREY And we haven’t let go yet.

ALCOCK God, no. It’s not going to happen.

It’s also a story about families.

ALCOCK It’s ultimately about dysfunctional fathers, at the heart of it, which I can relate to.

CAREY The same. Been there.

One of the show’s central themes, about women’s autonomy over their own bodies and futures, has become even more salient since production began, with the U.S. Supreme Court overturning Roe vs. Wade.

CAREY I think that’s what makes the show so watchable, relatable to a modern-day audience. It’s so much more than fantasy and dragons. There’s grounded, truthful topics and story lines that reflect the world we live in.

ALCOCK It explores the trauma that these two women would have faced within that world — not only the patriarchy, but the internalized misogyny. These two women are forced to battle with one another because of the choices made by men.

The irony of social media being like, “I don’t want to say goodbye to Milly for Emma,” or comparing Em to Liv!” That is what the whole show is about, and people are still doing it. So it’s clever.

How much have you worked with Emma and Olivia on —

ALCOCK We didn’t, at all. Nothing. Zero.

So you must be as curious as anybody to see how the characters will continue without you.

CAREY Yeah, I’m so intrigued. We didn’t even read the scripts that we weren’t in, so we know very little about what happens after we leave.

ALCOCK We weren’t given [the scripts]. I’ve asked for them so much, and they were like, “No, you cannot.” I’m going to be watching on the edge of my seat, because I want to know what’s going to happen.

What does it feel like to hand the reins of Rhaenyra and Alicent over to new actors?

ALCOCK I’m so excited to see what Emma did with Rhaenyra. There’s no way I could have played her in the later stages of her life because I don’t have the same lived experience that Emma has. So I’m so keen.

CAREY I love the way you worded that, Mil. That’s so true. When people say, “Do you wish you could do the rest of it?,” I’m always like, “I don’t know.” I don’t think I have the capacity.

But I will be honest: It’s strange handing off a character that is so personal. As actors, we put so much of ourselves into the people we play. So it’s strange having to leave someone’s story halfway through.

At the same time, it doesn’t feel unfinished because it’s going into obviously amazing hands with Olivia. It’s going to be really cool — and weird — to watch the show as a viewer and not be critiquing our own performances, and just take it in and appreciate the show for what it is.

Do you feel there was a sublimated romantic or sexual tension between Rhaenyra and Alicent?

CAREY As a queer person myself, I read an undertone in the script that I knew could be played. That being said, I don’t think Ryan Condal [a creator and showrunner] sat there writing a Sapphic drama. If you want to see it, you can. If you want to pretend it’s not there, you can also do that.

The thing is, these girls don’t know what “platonic” or “romantic” means, whether that be the words or the feelings themselves. There’s just a closeness between two young women that cannot be verbalized, especially in the world they live in. I don’t think they fully understand the feelings; it’s just all-consuming love.

There’s an underlying jealousy that I read into it, especially coming off the back of Episode 4. It was this scene where we were on a bench, and it’s the first time we’ve seen these two women reconnect after losing this closeness they had. I remember in rehearsal at the end of the scene, we were like, “Did you feel like we were about to kiss?”

CAREY Yeah, dude, it felt like we were going to kiss. That was really strange.

We didn’t do anything to make them gay, or to force “the gay” upon anyone. It felt so natural. As I said, it’s easy to ignore if you really don’t want to look at it. But if you’re rooting for them and you want to make the story more heartbreaking, then choose to see it.