The Apollo 11 moon walk wasn’t the first broadcast sent from space, but in geographic reach, it was the most astonishing. Microwave links, satellites and landlines carried images of Neil Armstrong’s steps around the globe from Australia and the United States to Japan and Europe, even parts of the Eastern Bloc, in virtually real time. This was live TV from more than 200,000 miles away, using the technology of 1969.

Although the experience of watching that event looms large in memory for those who saw it, for NASA historians and other space experts, the preservation of that broadcast has provided its own drama.

On Saturday, the moon landing’s 50th anniversary, three reels of videotape will be auctioned at Sotheby’s, marketed as “the only surviving first-generation recordings of the historic moon walk” and “the earliest, sharpest, and most accurate surviving video images of man’s first steps on the moon.”

According to Sotheby’s, a NASA intern named Gary George bought the recordings as part of a collection of 1,150 reels at a government surplus auction in 1976. He paid $217.77 for all of them. The bidding on Saturday starts at $700,000, and Sotheby’s estimates they will sell for over $1 million.

How those three humble reels came to be seen as a precious historical artifact speaks to the elaborate techniques used to bring the moon landing to the public. The story also involves government missteps that destroyed other recordings that could have rivaled Mr. George’s for the claim of being first. 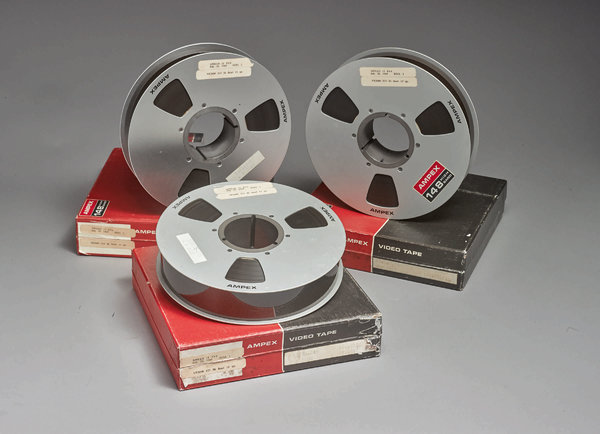 Because the lunar module was limited in the bandwidth it could send back to Earth — bandwidth that would also have to carry voice communications and medical information from the astronauts — Westinghouse designed a special camera that recorded imagery at a low frame rate, 10 frames per second. Those images were transmitted to three tracking stations on Earth, two in Australia and one in California. There, they were recorded to telemetry tapes (also called the slow-scan tapes or instrumentation tapes). These were the purest taped records of what the camera captured on the moon.

But that’s not what viewers saw on TV. The standard broadcast rate in the United States was 30 frames per second, not 10. And in 1969, the conversion “effectively involved pointing a television camera at a screen that could display that nonstandard signal,” said Stephen Slater, a space program historian and archival specialist.

By the time that converted imagery reached living-room TVs — after microwave and satellite hops across the globe and routing through Houston — “it was really ghostly,” he said. “It was really substandard quality compared to the image that the camera actually recorded.”

The slow-scan tapes were considered the first and clearest recordings of the moon landing. “That was where TV was recorded raw as it came from the moon,” said Richard Nafzger, a retired NASA engineer who coordinated television operations from Apollo 7 through Apollo 17.

But those tapes have likely been lost forever.

In the 2000s, NASA led a search for them and concluded that they had almost certainly been reused or erased during a tape shortage at NASA in the early 1980s.

Videotape recordings of the broadcast that NASA kept in Houston didn’t fare much better. “During the energy shortage during the Carter administration, the air conditioning in nearly all government buildings was turned off at night and on weekends,” said Bill Wood, who was a lead engineer at the California tracking station and part of the search for the telemetry tapes and later for the best-quality broadcast tapes. The high humidity in the Houston area led to irreparable damage to the tapes, he said.

These unfortunate events, in effect, let Mr. George’s tapes succeed to the throne of being called the earliest known remaining recording of the broadcast — by a hair.

They were made at the Manned Spacecraft Center, now Johnson Space Center, in Houston, where a technician would select the best images from Australia and California to create a feed (which Mr. Slater described as “NASA TV”) that went out to the world.

Mr. George’s tapes are a recording of the same feed everyone else saw. But people watching Neil Armstrong’s giant leap for mankind at home were viewing a feed relayed through microwaves, coaxial cables and satellites from Houston to television networks, with the images suffering a little degradation on every leg.

“It’s definitely going to be better,” said Paul Vanezis, a documentary producer and director who, as a videotape assistant at the BBC in the early 1990s, played the BBC’s recordings of the raw footage.

Still, some video experts have raised questions about the terminology Sotheby’s is using in its marketing. Mr. Slater, an archive producer on the recent documentary “Apollo 11,” said there are many other “first-generation” recordings of the broadcast. That’s true, according to an accepted definition of the term. According to Mr. Vanezis, any recording directly from a signal, as opposed to another tape, would be considered “first-generation,” including tapes that were retained in the archives of the BBC, CBS and perhaps other networks.

Cassandra Hatton, a vice president and senior specialist at Sotheby’s, said that comparing the tapes on offer to other extant copies, such as the BBC’s or the tapes at CBS News Archives, was “totally unnecessary,” and that the “first generation” label still applied.

Still, the subtleties of what makes these tapes unique have caused enough confusion that NASA published an article on July 8 clarifying that the tapes at Sotheby’s are not the lost tapes, as some publications have inaccurately reported.

(Sotheby’s, which has a detailed history of the moon landing’s transmission and tapes on its website, does not claim they are the lost tapes.)

The provenance is another selling factor. Ms. Hatton emphasized that the tapes were made in Houston. They came to Sotheby’s in their original boxes with labels and the receipt that Mr. George received when purchasing them from the General Services Administration. The owning agency is listed as NASA Johnson Space Center.

And now that he is getting older, he figured it was time to cash in on his surplus-sale discovery.

“Most of the people that were alive and were able to watch this originally on July 20, 1969, they are the ones that have a real appreciation for it,” he said.