Home » How Much Watching Time Do You Have This Weekend?

How Much Watching Time Do You Have This Weekend?

This weekend I have … a half-hour, and I want a clever comedy 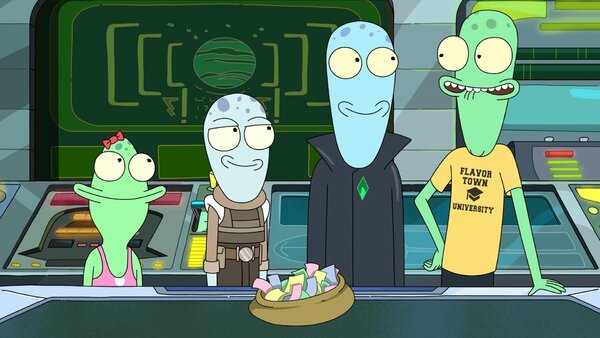 ‘Solar Opposites’
When to watch: Now, on Hulu.

The first season of “Solar Opposites” was wild and funny and fast, a clear cousin to “Rick and Morty” (the shows share a co-creator, Justin Roiland). Season 2, which came out last month, is even funnier and faster, and bolder, too. The series follows a group of aliens trapped on Earth, and it has a ton of lewd and juvenile humor. It also has a subplot about a shrunken-down humans who’ve established their own renegade society inside a wall, and I care more about those characters than I do about anything that has ever happened on “The Walking Dead.” If you want something naughty and terrific, watch this.

The season premiere of this gorgeous drama is set on the day of O.J. Simpson’s Bronco chase, an ominous detail that adds to the sense of liminality as the show enters its final season. It’s 1994, and everything feels, somehow, even more fragile than before: House of Evangelista is a shell of its former self, the AIDS pandemic rages on, and Pray Tell and Angel have developed unhealthy coping mechanisms to deal with their anguish. Because “Pose” often introduces new characters who know less about the ballroom scene and about the world in general than our heroes and heroines do, you can just jump in and start watching now — everything is explained.

… four hours, and I need some perspective

‘Secrets of the Whales’
When to watch: Now, on Disney+.

Nature docs are always a good way to hit a mental reset button — what’s Twitter drama to an aquatic beast? — and this mini-series has an especially hypnotic and satisfying combination of astounding footage, fascinating information and artful writing. (Sigourney Weaver as narrator doesn’t hurt, either.) Episode 1 is about orcas; Episode 2, humpback whales; Episode 3, belugas and narwhals; and Episode 4, sperm whales; each installment focuses on whale “culture,” how the animals communicate and collaborate and care for their young. If you want to remind yourself how big the world is, how mysterious and surprising, how strange and wonderful, how small you are but in a good way, watch this.