A devoted fan! Demi Lovato took her love for The Bachelorette to new heights when she stopped by the show’s live finale on Tuesday, July 30. Fans quickly spotted the Grammy nominee sitting beside Bachelor alum Demi Burnett in the studio audience, and she also shared several updates from her visit across social media.

“I interrupt this social media break with this very important and iconic snap shot of WINDMILL cookies with my new favorite person @alabamahannah … and quess [sic] what … Jesus still loves us,” Lovato, 26, captioned an Instagram pic of herself beside star Hannah Brown as they ate windmill cookies  — a reference to the former pageant queen’s sex confession with ex-suitor Peter Weber. “Tonight’s the season finale y’all … make sure to tune in cause it’s gonna get crazy!! @bacheloretteabc.” 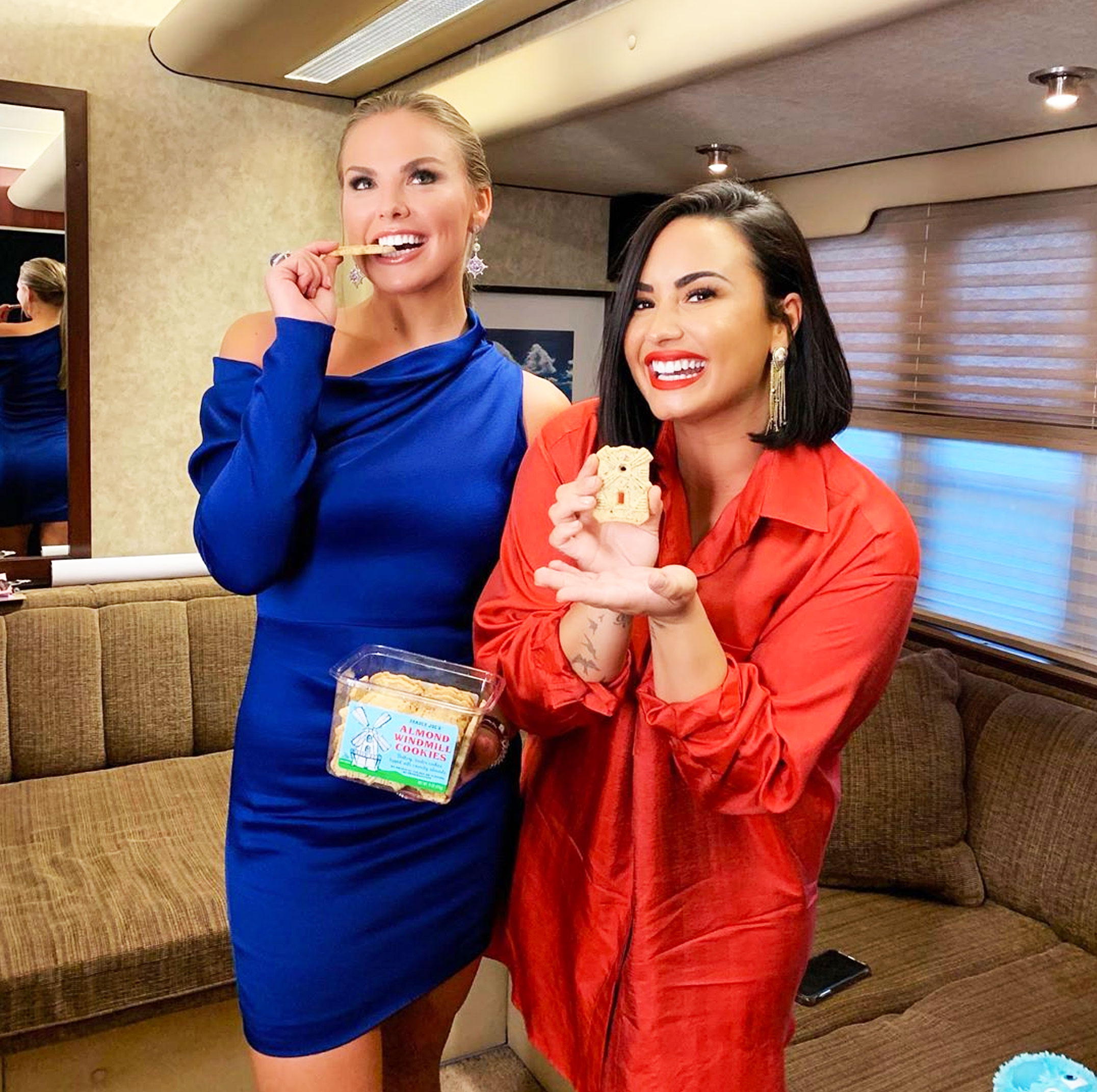 Brown, 24, shared her “love love love” for the Disney Channel alum in the post’s comments section. “So thankful for your support during this season of life and taking me under your wing. Also, thanks for sharing your mama with me,” she added.

The post attracted excitement from Lovato’s celeb pals, such as Debby Ryan. The former Jessie star wrote that she wanted Brown and Lovato “to have all the roses.” Amy Schumer, who made a guest appearance on Kaitlyn Bristowe’s season of The Bachelorette in 2015, replied that she was “blown away by this.” Ruby Rose, meanwhile, commented that this was “the moment we have been waiting for.”

The Camp Rock star also posted updates from her visit to her Instagram Stories. She shared a video with her mother, Dianna De La Garza, as they pulled up to the lot and spotted Brown’s runner-up, Tyler Cameron. Lovato laughed in the background as De La Garza excitedly said: “Oh, my God, there’s Tyler. There’s Tyler, right there. There he is! Oh, my God, he’s looking this way!”

Sadly, there was no presence of Mike Johnson in her Instagram posts. After the singer revealed that she was crushing on the fan favorite earlier this month, Johnson told Us Weekly on July 18 that he “would definitely take her out for an initial date.”

The “Sorry Not Sorry” singer attended the live taping of The Bachelorette’s explosive finale episode, where it was revealed Brown initially chose Jed Wyatt but later called off their engagement.

After the final rose, the TV personality came face-to-face with Wyatt. The musician apologized for coming onto the franchise while still in a relationship with his now-ex-girlfriend, Hayley Stevens.

“Sorry I took away that experience from you,” Wyatt, 25, shared with Brown. “And I’m sorry this has hurt your family, your friends, Bachelor Nation, everyone, my family, I am sorry, I am responsible for this, I will own up to it all day.”

While Brown’s engagement with Wyatt is no more, her journey with Cameron is far from over. When the Florida native took the stage, Brown opted to be “bold” and asked out the general contractor.

“You’re an incredible guy, and I’m a single girl … I was thinking maybe we could go for a drink,” the leading lady suggested. Cameron, in turn, replied: “I would love to, just tell me when. I’m there.”

Now that Brown’s journey to finding love has come to a close, Bachelor Nation devotees can look forward to the return of Bachelor in Paradise on ABC Monday, August 5, at 8 p.m. ET.