This article is part of our latest special report on Museums, which focuses on reopening, reinvention and resilience.

Museum shows are always collaborations to some degree, because artists and curators work together to create them.

But “Each/Other: Marie Watt and Cannupa Hanska Luger,” opening this weekend at the Denver Art Museum, reflects the work of more hands than usual.

Not only does the exhibition pair two contemporary artists, who are displaying their separate works as well as one joint project, many of the pieces were made also with hundreds of contributions from non-artist volunteers, a mode known today as “social practice” and one with much older roots.

For a pair of wearable sculptures in the show, “The One Who Checks & The One Who Balances,” Mr. Luger even worked with his mother, who is also an artist, on some of the beadwork.

Both artists draw on their Indigenous backgrounds in their work. Ms. Watt, 53, is part Seneca, and Mr. Luger, 42, is an enrolled member of the Mandan, Hidatsa and Arikara Nation who also has Lakota heritage.

“I think that especially in my tribe and in other Indigenous communities, social practice is the way that we come together intergenerationally,” said Ms. Watt, who is based in Portland, Ore. “It’s the way that knowledge is shared, and it’s often been the way things are made.”

Mr. Luger, who is based in Glorieta, N.M., said that collaboration was the “thread that connects our work.” 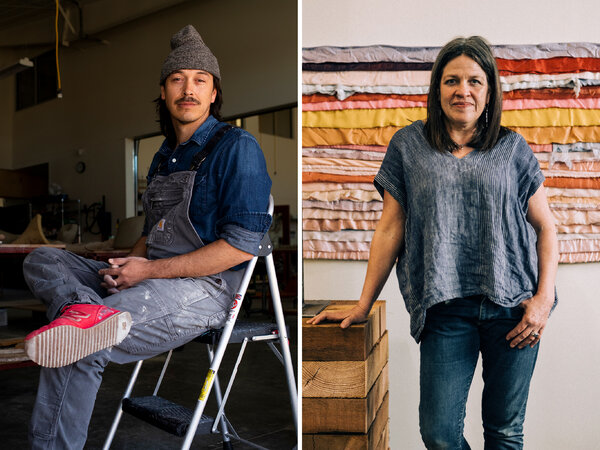 “Each/Other,” featuring 26 works and on view through Aug. 22, is another chapter in the Denver Art Museum’s long history of showing Indigenous work. The institution established its Department of Indian Art in 1925, and now its Indigenous collection comprises the single largest block of works, about 20 percent of the museum’s holdings.

The coronavirus pandemic has added a new layer to both the meaning behind the exhibition and its execution.

“It’s become more and more relevant as we developed it, and it’s been changing since Covid, especially the community-based projects,” said John P. Lukavic, the museum’s curator of Native Arts and the organizer of the show. (After its presentation in Denver, “Each/Other” will travel in September to the Michael C. Carlos Museum at Emory University in Atlanta.)

The exhibition was not quite a blind date in its pairing of the two artists. Mr. Luger and Ms. Watt had met but did not know each other well before they began.

The combination has an unusual origin story: Mr. Lukavic thought of it while at a karaoke bar in Midtown Manhattan, during a social event that both artists attended.

As he developed the idea, he said, he realized that “collaboration is central to their practice, but they do it differently.”

Mr. Luger has been in the forefront of using social media to enlist help in creating works like his 2016 “Mirror Shield Project.” Components of the work, Masonite boards covered with mirrored foil, appear in the Denver show.

Mr. Luger grew up partly on the Standing Rock Sioux Indian Reservation, which straddles North Dakota and South Dakota, and he said he created “Mirror Shield” in response to the controversial Dakota Access oil pipeline, which now runs under the reservation.

“It was built out of desperation,” Mr. Luger said. “I wanted to create a protective shield for the water protectors of Standing Rock.”

He explained that the local Indigenous peoples consider the waterways, in particular the Missouri River, as central to their culture, and that he believed that the pipeline threatened the water supply, as well as ancestral burial grounds.

“I wanted to answer the question, ‘What can one person do?’” said Mr. Luger, who came up with a quick and relatively cheap way to construct the shields. He initially made them in the parking lots of the big-box retail stores where he got the supplies.

He then used Facebook and other channels to transmit instructions on how to make the shields. The hundreds that resulted were seen in much news coverage of reactions to the pipeline. What was described as a protest, Mr. Luger said, was actually the performance of an artwork — one that Ms. Watt admired at the time, calling it “brilliant in its symbolism.”

For another work in the Denver exhibition, “Every One” (2018), a pixelated portrait made of 4,096 small ceramic beads, Mr. Luger enlisted dozens of institutions and hundreds of individual makers to create the components.

It is based on a photograph by Kali Spitzer, and each bead represents one of Canada’s missing or murdered Indigenous women, transgender and queer people.

“Data can be dehumanizing,” Mr. Luger said. “I wanted to figure out a way to take that data and rehumanize it so you can see it at scale.”

By contrast, some of Ms. Watt’s works were made via in-person gatherings before the pandemic. Both “Butterfly” (2015) and “Trek (Pleiades)” (2014) incorporate reclaimed wool blankets, turned into colorful, geometrically patterned artworks.

“Butterfly” began during a residency that Ms. Watt did at the Denver Museum of Art in 2013; she hosted a sewing circle open to the community. The piece was later acquired by the museum.

Ms. Watt has been working with blankets for the better part of two decades, something she never expected to say, having studied printmaking and painting. But she found that the form resonated.

“A blanket is this object that has really deeply personal meaning,” she said. “For my family and my tribe, it is a way to honor people for being witness to important life events.”

Ms. Watt engaged in a type of collaboration that is fairly typical for contemporary artists — farming out technical portions of making a work to experts. To create “Companion Species (Radiant)” (2017), a sculpture of a wolf made of crystal that sits on a maple base, she worked with artisans at the Corning Museum of Glass in Corning, N.Y.

“It was a very different experience, and life-changing,” she said. “I went there having never worked with glass. It was hard for me to actually really figure out my entry point into that material.”

The resulting sculpture asks the question, Ms. Watt said, “What would the world be like if we considered ourselves companion species?”

The inspiration, she said, was that Seneca and Iroquois tribes “consider animals our first teachers.”

The motif of the wolf also turned into the large artwork that Ms. Watt and Mr. Luger made together, which shares the overall exhibition title: “Each/Other” (2021).

About 16 feet long and 9 feet high, the lupine figure is a steel frame covered in about 700 bandannas, each made by different contributors, who were asked to express visually “their last year, in response to sheltering in place, civil unrest, social distancing and the virus,” Mr. Luger said. People from five countries contributed.

Given that the show opens in time for Memorial Day weekend, at a time when the pandemic’s end may finally be in sight, something about the power of a collective effort strikes Mr. Lukavic as timely.

“The title ‘Each/Other’ really encapsulates this idea that we’re all individuals,” Mr. Lukavic said. “But we need each other to move forward in society.”