It didn’t take long for things to get petty amid the split between Jennifer Lopez and Alex Rodriguez now that she’s hooked up with Ben Affleck. The former New York Yankee was spotted coming out of a Miami restaurant and he decided to take a dig at Lopez’s new beau by reminding everyone who he’s rooting for this baseball season. 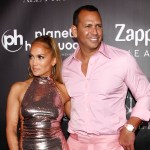 “Go Yankees,” is all Rodriguez told Page Six when he was asked about his reaction to Bennifer’s surprising Montana vacation. We have to hand it to A-Rod that it was a pretty good comeback given the fact that Affleck’s favorite team, the Boston Red Sox, is a notorious rival to the New York Yankees. Rodriguez is probably a little tender about the Shotgun Wedding star moving on so quickly after ending their engagement, so any little shot he can get in right now probably feels good.

There’s been a lot of baseball talk in the last few weeks. Lopez gave us a clue that Bennifer 2.0 could be happening when she sang the Red Sox’s anthem, Neil Diamond’s “Sweet Caroline” at the VAX Live concert in Los Angeles a few weeks ago. She passed it off like it was the song her mother sang to her every night before bedtime, but that’s the first time we’ve heard that story. We took it as a bat signal that Jenny from the Block and Batman were back together.

Rodriguez likely didn’t see those same bat signals because he was trying hard to “reconnect” with his former fiancée. “He has been reaching out to J.Lo trying to meet with her and she has been very short with him,” a source told E! News. But Affleck had other plans and was wooing Lopez via email beginning in early February while she was filming in the Dominican Republic. A TMZ source shared that the Argo star was able to “own her heart” with his soulful writing, so it was hook, line and sinker from the first moment he hit send on the email.

The former MLB star is striking out with his ex, so he’s now reduced to making baseball jokes to the press while he nursing his wounds. Lopez isn’t giving him a second thought because Bennifer is back.

Before you go, click here to see a complete timeline of Ben Affleck and Jennifer Lopez’s relationship.