John Outterbridge, Who Turned Castoffs Into Sculpture, Dies at 87

LOS ANGELES — John Outterbridge, a Los Angeles cultural leader and artist who made powerful sculptures from what is usually dismissed as junk or castoffs — a means of exploring loaded social issues as well as celebrating a history of African-American resourcefulness — died here on Nov. 12. He was 87.

His daughter, Tami Outterbridge, confirmed the death. No cause was given.

Mr. Outterbridge managed to balance his artmaking with his work as an arts educator and administrator. In 1969 he became director of the Compton Communicative Arts Academy, an old ice-skating rink converted into a community arts center. His influence extended to the building itself, where he embedded the harp of an old piano in a wall so that visitors could play the strings as they entered the space.

“It was a magical place,” said the artist Mark Steven Greenfield, who described Mr. Outterbridge as “a poet-philosopher or contemporary griot,” referring to the West African storytellers and history-keepers. “There was always something going on in there — it could be a musical performance, a drum circle or a children art’s workshop.” 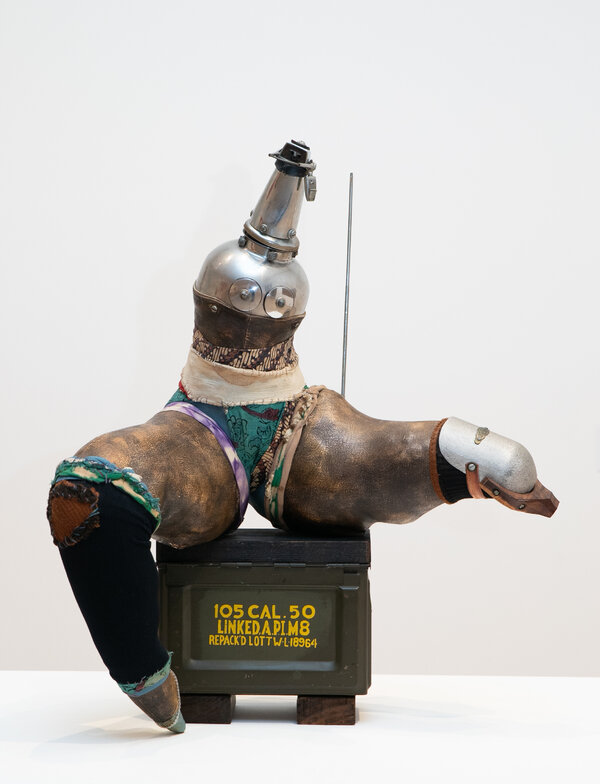 From 1975 to 1992, Mr. Outterbridge was director of the Watts Towers Arts Center, an arts education and exhibition space inspired by the soaring towers that the folk art hero Simon Rodia built by hand and decorated with found glass, pottery shards and more.

His own artworks were likewise resourceful, often incorporating leftover wood, fabric scraps or rusted metal. Many of his materials came from junkyards in Pasadena, not far from his home in Altadena.

“John was a terrific artist, innovative and exceptional with materials,” the artist Betye Saar wrote in an email, describing how she first met him in the 1970s at the Black-owned Brockman Gallery in Los Angeles. Scholars now place him alongside Ms. Saar and Noah Purifoy as a leading practitioner in the 1960s and ’70s of this often raggedy, pieced-together mixed-medium sort of sculpture known as assemblage.

“In castoffs there are profound treasures,” Mr. Outterbridge told the critic Shana Nys Dambrot in a broadcast by the California public television station KCET in 2016. “That’s what soul food is about. Chitterlings and pig feet are all about the notion that, as a people, we’ve taken the scraps, the castoffs, and made them into something so tasty that one can’t help but suck right down to the bones.”

John Wilfred Outterbridge was born to John Ivery and Olivia Northern Outterbridge on March 12, 1933, in Greenville, N.C. He was the second of eight children and is survived by four siblings: Freddie, Marvin and Robert Outterbridge and Jackie Outterbridge Parks.

He liked to say that is parents were the first artists he knew. His mother played piano, made drawings and wrote poetry, while his father scraped together a living by hauling and scavenging junk, which he often stored in the family’s backyard. John’s uncle Buddy was “a concert pianist with no concert stage” because he was Black, Mr. Outterbridge told the historian Richard Cándida Smith in 1989 for an oral history project at the University of California, Los Angeles.

The family home was covered with paintings by the children — even some window shades were hand-painted. And he was surrounded by the beauty of homemade things: his grandmother’s soap bars, stacked like buildings; wood floors bleached bone-white by all the lye; tall poles outside decorated with gourds that rattled and scared away the birds.

He enrolled at North Carolina Agricultural and Technical State University in 1951 but left after a year to join the Army, to take advantage of the G.I. Bill. He trained as a munitions specialist and was stationed in southern Germany for two years during the Korean War.

Even his military years proved creative. He made small paintings of sights foreign to him, like villages with old cathedrals and cemeteries. During a barracks inspection one day his commanding office was rummaging through Mr. Outterbridge’s locker when a stash of paintings fell out. The officer confronted him: Where did you get these paintings?

“I did these,” Mr. Outterbridge said, having to repeat it several times before he was believed.

The officer, who collected art, was impressed. He created a studio space for Mr. Outterbridge and gave him commissions to decorate officers’ clubs.

After his military service, Mr. Outterbridge attended the American Academy of Art in Chicago, joining a community of artists and musicians. He made paintings, some with surreal touches, and drove a bus for the Chicago Transit Authority. He met Beverly Marie McKissick at a choir practice at St. Anthelm Catholic Church, and they married in 1960. (They divorced 30 years later.)

In 1963 the couple moved to Los Angeles in 1963, where he worked in a production studio that served designers. One of his odder jobs was painting an abstract canvas for the actress Jayne Mansfield to match the colors of her home décor.

Mr. Outterbridge taught art classes at local colleges and became an art handler and instructor at the Pasadena Art Museum, where he installed dozens of Andy Warhol’s Soup Can paintings and befriended the sculptor Mark di Suvero. When Mr. di Suvero left the country in 1967, he left his tools with Mr. Outterbridge.

Mr. Outterbridge credited these tools, including electric shears for cutting metal, with helping him complete his “Containment” series. For these sculptures he covered wooden armatures with pieces of sheet metal to create the illusion of bulk and weight, sometimes incorporating straps, buckles or ties that evoke notions of physical restraint or slavery. Created in the wake of the 1965 Watts riots, the work was immediately read as a portrait of racial oppression.

The series debuted in 1969 at the Brockman Gallery, which showcased groundbreaking Black artists — including Ms. Saar, Mr. Purifoy, Judson Powell, David Hammons and John T. Riddle Jr. — who had largely been overlooked by mainstream galleries and who also worked with found objects.

For his next major body of work, the “Rag Man” series (1970-78), Mr. Outterbridge began manipulating painted canvases, free from their usual wooden supports, as a sculptural medium, stretching them into shapes and sewing them into pouches or bundles. The works ranged from abstract to political; “Jive Ass Bird,” for one, from 1971, featured a bloated image of the American flag.

For his “Ethnic Heritage” series, started in the 1970s, Mr. Outterbridge fashioned dolls — both full-bodied and disfigured — from metal, wood, red clay, rag, human hair and more. The idea had come from watching his young daughter at play, but he also drew on ancestral African imagery and used adornments like shells and beads to create figures he called tribal members or elders.

Mr. Outterbridge returned to rags again in 2011, when new interest in his work began growing after it was included in a regionwide, Getty-funded initiative to explore Los Angeles’s history as an art capital. His art appeared in seven of these exhibitions, including the Hammer Museum’s survey “Art and Black Los Angeles,” covering 1960 to 1980, and a show of his new work at the exhibition space LAXART. Called “The Rag Factory,” it was his first solo show in Los Angeles in 15 years.

The central work in the solo show consisted of brightly colored rags tied together into long strands that extended nearly floor to ceiling like columns — the most disposable and lightweight of materials made quasi-architectural. Other versions of the work appeared at the Studio Museum in Harlem and at Tilton Gallery in New York, Mr. Outterbridge’s main gallery since 2006.

Asked about rags by curators and writers, he shared his memories. Sometimes he talked about the clothes his mother had sewn, or the fabric necklaces that his grandmother had stitched, with pouches for medicinal herbs. Or he recalled the rag collectors he had seen in Chicago, with their colored bundles.

“It was very exciting to hear the ragmen move in and out of the alleys calling up for rags,” he told Mr. Cándida Smith. One South Side ragman did particularly lively musical call-outs in the morning accompanied by a conga player.

His rags are layered with such personal and cultural history. They have stories to tell.