It looks like one unspoken royal rule has been tossed aside now that King Charles III is in power. When Queen Elizabeth II was on the throne, the senior royals avoided posing for photos, especially selfies, with the crowds, but Kate Middleton and Prince William seem to be throwing the antiquated idea by the wayside.

Over the past few months, royal watchers have noticed that Kate and William have been more than willing to have their image snapped with their fans. This shift could be signaling a wonderful way the couple is modernizing the monarchy. It’s an easy way to engage with their supporters and keep those warm, fuzzy feelings about the palace going (which they certainly need after the last few tumultuous years).

During the Princess of Wales’ first solo outing of the year on Jan.18, she was spotted in a video, posted by the Daily Mail‘s Rebecca English, happily stopping for snapshots. Kate warmly put her arm around the person’s back and posed alongside the well-wisher. She’s then seen smiling for two selfies later in the clip as she was exiting the event. The photos were done swiftly, but you can see how the small gesture made a big impact to everyone who got their coveted picture with Kate.

While the selfie rule was an unwritten one, it seemed to be a policy set by Queen Elizabeth, who preferred that the royals follow more traditional protocols. However, Charles, who hasn’t gotten into the selfie craze just yet, doesn’t seem to mind that his son and daughter-in-law are doing something that is bringing goodwill to their supporters.

Before you go, click here to see more photos of Prince William & Kate Middleton through the years. 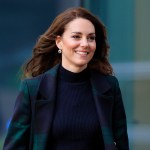