Remember that luxurious 40th birthday vacation Kim Kardashian took back in October at the height of the pandemic? She caught a lot of heat for her tone-deaf posts when many Americans were out of work and hadn’t seen their families in months. Well, that trip is coming back to bite her, thanks to the Keeping Up with the Kardashians revelation that she caught COVID-19 shortly after her return. 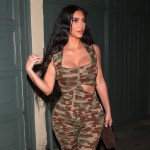 Now the SKIMS founder is having to defend herself after BuzzFeed News drew up a timeline of when they think the reality star caught the virus, which they believe was tied to her lavish party. She responded with a much different story and declared the news site’s report “false” on Twitter.  “Nobody caught Covid from the trip. Saint was the first to have it in our family and he caught it from school from another student who tested positive first,” she wrote. “I then developed symptoms and got it a few days after he coughed on me while caring for him.”

What makes this story even more dramatic is that it tied into the news that she failed the baby bar exam and was supposed to take it again upon her return from her birthday celebrations. The symptoms from the virus hit her and her three other children, daughters North, 7½, and Chicago, 3, and son Psalm, 2 hard and delayed her exam until June 2021.

Even if she didn’t catch the virus at her festivities, her diagnosis came right on the heels of the trip — and many fans won’t believe her version of the events. For a TV personality, who shares every aspect of her life with viewers, it’s also curious that Kim chose not to reveal her illness until the episode aired, approximately six months later. It’s as if she knew she would have to defend her pandemic choices all over again.

Before you go, click here to see how Kim Kardashian’s life has changed over the years.