Kim Kardashian is no stranger to Photoshop accusations, but she quietly proved the haters wrong over the latest drama.

Earlier this week, the 42-year-old shared a sweet snap beside most of her siblings – Kourtney and Khloe Kardashian, and Kendall, Kris and Kylie Jenner – as they posed in front of a Christmas tree.

However, it didn’t take long for eagle-eyed fans to zoom in and spot some questionable aspects to the stunning upload.

Many speculated that it had been edited as everyone appeared to be looking in different directions, while Kendall’s feet were seemingly on top of Kylie’s gown.

Some baffled followers went so far as to suggest that they had all been ‘Photoshopped in’ from other photos.

Having none of it, Kim took to Instagram to share a video of the moment they were all gathered around the tree, with cameras flashing from all directions.

Although the Skims boss didn’t caption the brief clip, she confirmed that there were no sneaky tactics going on behind the scenes. 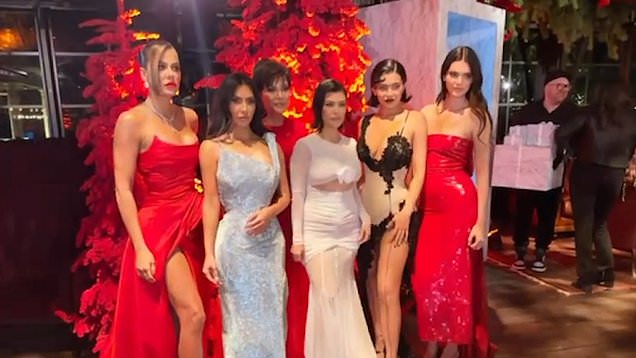 Of course, this isn’t the first time the mom-of-four has been called out for running pictures through Photoshop before posting them to the world.

Earlier this year, she was called out for snaps she had previously posted of daughter Chicago at Disneyland with Khloe’s oldest child, True.

It later emerged that the Kardashians star had actually edited pictures of her niece over existing photos of Kylie’s daughter, Stormi, who was actually on the trip instead.

After being caught out, she laughed the drama off and explained that she had asked the Lip Kit mogul if she could post the real image to continue a theme on her Instagram grid – but her sibling ‘didn’t want any pics of Stormi out’ at that time.

Undeterred, Kim placed True’s body over the youngster’s and went about her day.

‘Basically, I have a grid for IG and I’m doing pinks and blues,’ she said on a recent episode of the Kardashians. ‘There was the cutest picture of Chi and Stormi at Disneyland and they’re wearing pink.

‘I sent it to Kylie for approval, she goes, “No, I really don’t want any pics of Stormi out right now”. I respect it so I Photoshop True’s face onto Stormi’s body.’

Kim added to the camera: ‘You heard it here first. It’s not a major scandal, I just wanted my grid pink and blue.

‘Photoshop fail, but whatever.’