Maurice Edwards, Busy Figure in Theater and Music, Dies at 97

He was involved with the Brooklyn Philharmonic for many years and performed both on Broadway and off. He died of the novel coronavirus. 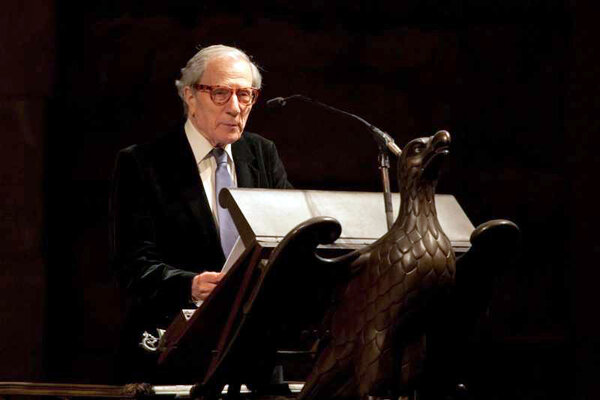 This obituary is part of a series about people who have died in the coronavirus pandemic. Read about others here.

Maurice Edwards, whose long and varied résumé included directing operas and stage plays, acting in numerous Off Broadway productions and a few on Broadway and helping to found experimental theater troupes and manage the Brooklyn Philharmonic, died on Sept. 23 in Englewood, N.J. He was 97.

His executor, James Waller, said the cause was the novel coronavirus. Mr. Edwards’s nephew and closest living relative, Allen Markson, said Mr. Edwards had moved to the Actors Fund Home in Englewood from a nursing home in Queens five days before his death.

Mr. Edwards was a man of many interests and seemed to find ways to indulge them all. In 1968 he was a founder of the Cubiculo on the West Side of Manhattan, a seat-of-the-pants theater operation that presented plays, poetry readings, films and lots of dance.

“To its growing, usually youthful, public — which often spills out of the 60‐ to 75‐chair seating area — the Cubiculo is unique,” The New York Times wrote in 1970 of the group, for which Mr. Edwards served as program coordinator.

In 1974 he was a founder of another adventurous Manhattan troupe, the Classic Theater, which he described as “an Off Off Broadway group specializing in seldom-performed classics.”

A production Mr. Edwards directed in 1978 underscored just how committed the troupe was to that mission. It was called “The Country Gentleman,” and Thomas Lask’s review in The New York Times began this way:

“The Classic Theater, now holding forth at the Loretto Playhouse, 20 Bleecker Street, has come up with a rarity — a world premiere of a play 300 years old.”

The play was a comedy written by Sir Robert Howard and George Villiers, Second Duke of Buckingham, and took potshots at one of the duke’s rivals. King Charles II shut down rehearsals before it could be performed, and it lay dormant for centuries until it was discovered in the Folger Library in Washington. Mr. Edwards heard about it and latched on.

He was artistic director of the Classic Theater from 1974 to 1989. The next year he became artistic director of the Brooklyn Philharmonic Orchestra, which he had been involved with for decades, first as assistant manager (when the group was known as the Brooklyn Philharmonia), then as manager and executive director. It was a period in which the orchestra, as The Times noted in 1989, “evolved from essentially a community ensemble to a highly visible part of New York’s musical life.”

As artistic director, Mr. Edwards was responsible for the planning of recordings and tours. He served until 1997. In 2006 he told the ensemble’s story in the book “How Music Grew in Brooklyn: A Biography of the Brooklyn Philharmonic Orchestra.”

He told his own story in “Revelatory Letters to Nina Cassian” (2011), an unusual memoir structured as a series of letters to Ms. Cassian, the exiled Romanian poet, whom he had married in 1998. The letters recounted episodes from his life and pondered their meaning. Eve Berliner, in her online magazine, called the book “a symphony of language and art and dance and music and literature.”

Maurice Edward Levine was born on Dec. 7, 1922, in Amasa, on Michigan’s Upper Peninsula. According to a notation in the archives of the New School, where he donated some papers, he changed his name when he joined the Actors’ Equity Association sometime after World War II because there was another actor with his name.

His father, Henry, was a trader in furs and scrap metal, and his mother, Sophia (Manhoff) Levine, was a homemaker.

Mr. Edwards grew up in Madison, Wis., and in the 1940s earned a bachelor’s degree at New York University and a master’s in comparative literature at Columbia University. In that same decade he served in the Army, earning a Bronze Star when he, as the citation put it, “displayed great ability and self-sacrificing devotion by moving under fire to secure assistance” when his billeting party came under German sniper fire in April 1945.

Mr. Edwards was a busy actor and, if never quite a famous one, worked opposite some who were or soon would be.

He made his Broadway debut in 1950 in a secondary role in “Happy as Larry,” a vehicle for Burgess Meredith that lasted only three performances. His next Broadway turn, in 1954, fared better; it was the musical “The Golden Apple,” which helped elevate Kaye Ballard to stardom. He also played Nachum, the town beggar, in the original Broadway production of “Fiddler on the Roof” in 1964, with a cast led by Zero Mostel as Tevye.

Off Broadway, his many credits included stepping into the role of Mr. J.J. Peachum as a replacement player in “The Threepenny Opera,” which opened at the Theatre de Lys in Greenwich Village in the mid-1950s and ran until 1961. He was also one of many replacement players in the long run of “The Fantasticks,” taking on the role of the father of the female lead.

Mr. Edwards’s list of acting credits was rivaled in length by his list of directing credits. He directed dozens of plays for the Classic Theater, the Cubiculo and other groups. He also directed a number of operas, including several at the Brooklyn Academy of Music presented by the Brooklyn Philharmonic.

Among those who worked with Mr. Edwards was the composer Leonard J. Lehrman. Mr. Lehrman completed Marc Blitzstein’s opera “Sacco and Vanzetti,” about the Italian immigrants executed in 1927 after having been convicted of murder during a highly questionable trial; Mr. Blitzstein had left it unfinished at his death in 1964. When Mr. Lehrman premiered the work at the White Barn Theater in Connecticut in 2001 he called upon Mr. Edwards to play two different Massachusetts governors: Alvan T. Fuller, who refused to grant clemency in the case, leading to the executions, and Michael S. Dukakis, who 50 years later issued a proclamation affirming that the two had been unfairly tried.

“Maurice was quite a character,” Mr. Lehrman, who knew him for 30 years, said by email, “full of anecdotes, stories, puns and insights. It was sometimes not easy to end a phone conversation with him, but seldom did one want to!”