After Meghan Markle’s bombshell interview with Oprah Winfrey in which she revealed severe mental health struggles and racist conversations within the royal family about Archie’s skin color, many commended Oprah’s instantly iconic reactions to Meghan’s particularly startling confessions (and many more memed them). But the commentary wasn’t one about the authenticity with which emotion plays on Oprah’s face: it was about her masterful choice to help guide and translate the emotion of the viewer. Tweets commending Oprah on pretending to be shocked about claims of racism within the royal family made the rounds nearly as quickly as the images of her shocked face — and former First Lady Michelle Obama seems to have signaled that there’s truth to this theory in her Today interview with Jenna Bush Hager. Asked to address Meghan and Oprah’s conversation and the allegations of racism within it, Obama expressed her sadness, of course, but she also confirmed that racism is not the shocking surprise it’s sometimes made out to be. 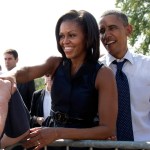 In addressing Meghan’s claims about the royal family, Hager said this now widely-circulated quote, saying it was “heartbreaking to hear” that “she felt like she was in her own family” and yet they “thought differently of her.”

It’s clear that, for Hager, this is a genuinely heartbreaking proposition. But Obama does not have to sit with that scenario in order to imagine what it might feel like.

“As I said before, race isn’t a new construct in this world for people of color,” she reminded Hager. “And so it wasn’t a complete surprise to hear her feelings and to have them articulated.”

Obama further shared her sympathies with Meghan as another Black woman in the spotlight, saying: “Public service is a bright, sharp, hot spotlight and most people don’t understand it nor should they. The thing that I always keep in mind is that none of this is about us, in public service, it’s about the people that we serve. I always try to push the light back out and focus it on the folks that we’re actually here to serve.”

With Meghan’s own emphasis on service in her life, we hope she’ll take heart in Obama’s advice, especially now that she’s out of a system that literally judges her for her performance at various royal appearances over actual work she might do. But while white audience members are letting the reality of Meghan’s situation sink in, Obama reminds us that the Black women watching were not surprised.

Before you go, click here to see presidential families over the years.