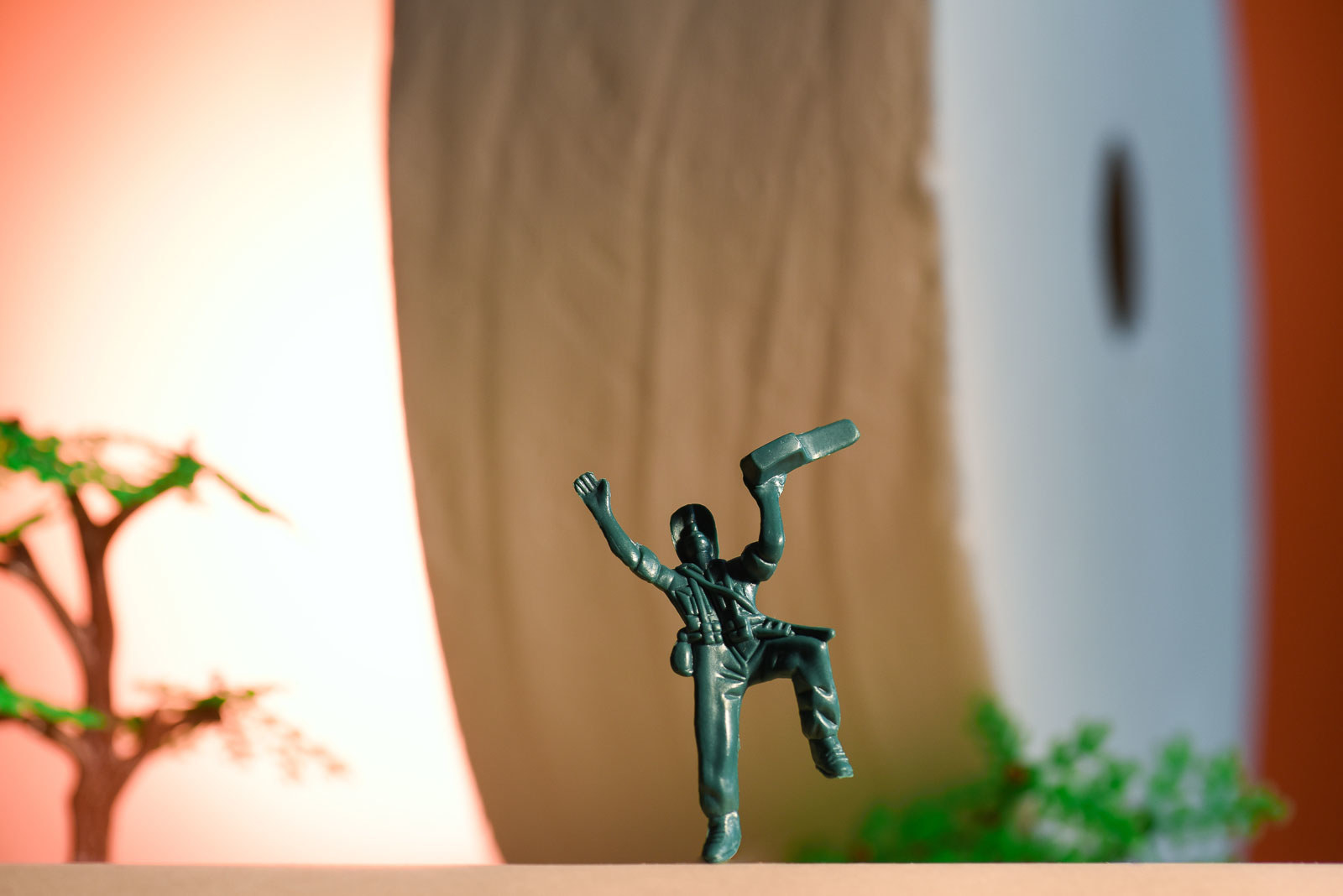 Archimedes, the ancient Greek scientist, was taking a bath when he had his eureka! moment, discovering a physics principle using water displacement to measure density. Rob Reinerman, lead of the innovation team at Procter & Gamble, was taking a dump when genius struck, leading to the creation of Charmin’s Forever Roll, a massive roll of toilet paper for millennial asses.

Reinerman, a 14-year veteran of P&G, had been pulled off his job as brand manager of Bounty paper towels and assigned to lead a newly formed innovation team within the toilet paper division. Along with his partner Kevin Mitchell, the bigwigs had tasked them with a singular purpose. “Never run out of toilet paper is the mission,” Reinerman said.

“I was at home, I think on a weekend. I was finishing up my business and faced the age-old question of whether to replace the roll or leave that last square for the next person,” Reinerman told BuzzFeed News. Ultimately, he knew the next person to use the bathroom would be his wife, who would be annoyed to find a nearly kicked roll.

But the germ of an idea was planted: What if they made a toilet paper roll that was…UNIMAGINABLY HUGE. 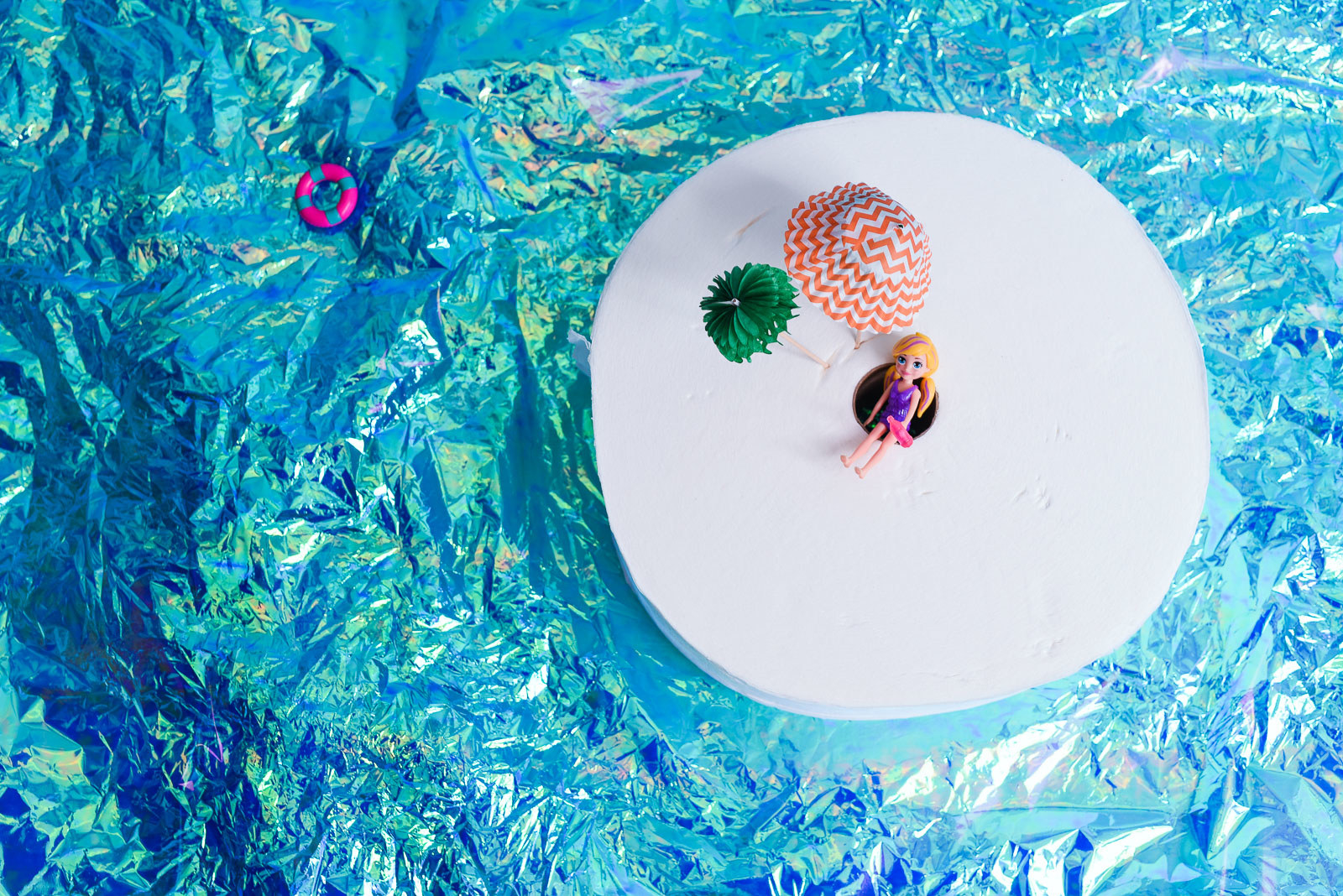 The Forever Roll is 12 inches in diameter and is equivalent to 24 rolls of regular-size Charmin Ultra Soft.

Charmin pinched off its Forever Roll to consumers in April. It’s basically one of those industrial-size rolls you’d find at a rest stop, but so very soft. A few weeks ago, the Forever Roll caught a second wave of internet buzz when it was mentioned in a Wall Street Journal article about new household products designed for adults who live alone. Reinerman crowed at the time about how it alleviates the storage problem for urban apartment dwellers (a bigger roll means less TP to store under the sink) and how the huge rolls can last a single person up to two months.

The response online was divided. Some thought this was a sad indicator of the state of the millennials: delaying marriage and children, unable to buy homes with ample bathroom storage like their parents, stuck in tiny apartments with nowhere to stuff extra rolls of toilet paper, and suffering from such burnout that the simple task of remembering to buy toilet paper once a week was too hard. Also, it’s a giant roll of paper for going doody, which is inherently funny.

Webster’s dictionary defines “forever” as “a limitless time.” Charmin defines it as about one month, possibly two if you’re single, which is how long a single Forever Roll — 12 inches in diameter and equivalent to 24 rolls — will last you. Due to the girth and heft of the roll, it won’t fit standard toilet paper roll holders, so they created special freestanding and adhesive wall holders (for millennials who will never own a home and can’t drill into their landlord’s walls). A starter kit of three rolls and a stand costs $30, and a single roll is $10.

The (tiny) TP-in-a-roll format that we know now was popularized around 1890 by the Scott Paper Company — lots of people were wiping with the Sears Roebuck catalog before that. The Hoberg Paper Company of Green Bay, Wisconsin, launched the Charmin brand in 1928 and soon offered the classic four-pack.

For the next few decades, the physical form of the roll didn’t change much. It took until 1994 for Charmin to make the double roll. They then created a “Mega Roll,” equivalent to four rolls.

Yet aside from tweaks to texture, prints, or even scents (Angel Soft has two new scented core options), the general shape and concept of toilet paper for home use hasn’t changed in our lifetime. The biggest development of late has been wet wipes — including varieties targeted at men: Dude Wipes, Dollar Shave Club’s One Wipe Charlies, or Mangroomer’s Biz Wipes in “Executive scent” — and that’s not going well. Because wipes don’t break down as well as regular TP, they create massive, clogging “fatbergs” in sewer systems.

What happened to the American spirit of ingenuity? We put a man on the moon, and we still use basically the same dinky TP rolls as president Taft. Sure, we brought giant-size rolls to public restrooms, but that industrial stuff is thin, rough, hole-ripping. An ass war crime. Only a stone-cold psychopath would consider bringing home that giant wheel of rough paper, encased in a rugged dispenser to protect it from thieves. Why had no one, in over 100 years, thought, Hey, what if we made a GIGUNDOUS roll of soft toilet paper?

No wonder the feedback on the Forever Roll on Charmin’s site so far has been disproportionately positive: 4.7 stars out of 5 from more than 2,800 reviewers. They compared the magnitude of the invention to sliced bread (!), touted the roll as successful Father’s Day and birthday gifts (?), and remarked on how smoothly it glides on the Forever Roll stand. Of the complaints that were filed, a large share revolved around the roll not lasting long enough: “This thing just screams ‘use more!! MORE!!’ and my kids comply,” one user griped. But bottom line, folks: “Huge and soft.”

Could this signal a future in which all consumer goods are enormous? In which our houses are just Willy Wonka wonderlands of monstrously oversize paper products and fountains of soap? Is this a sign of the excesses of peak capitalism, or a sad sign of the state of the millennial condition?

Of course, toilet paper is not without its controversies. If you, a millennial who poops a lot (and who isn’t? avocado toast is chock-full of fiber) and are also concerned about the environmental impact of the Big Ass Roll, you’re not alone. And it’s not just that it encourages people to use more paper per wipe.

Shelley Vinyard, of the nonprofit Natural Resources Defense Council, said Charmin is made from 100% virgin paper, no recycled fibers, just pure trees. “It’s an easy place to make a difference and vote with your dollars for a more sustainable option,” said Vinyard. NRDC notes that competitors like Marcal use recycled materials.

Loren Fanroy, a representative for Charmin, told BuzzFeed News, “100% of our wood fiber supply is third-party certified with responsible forestry certification systems, like the Forest Stewardship Council (FSC), and come from sustainably-managed forests. We do not participate in any deforestation practices, and for every tree we use, at least one is re-grown.” And Reinerman points out that since each Forever Roll equals 24 regular rolls, you use fewer cardboard tubes, and there’s no plastic wrap packaging.

Still, destroying forests to wipe our butts can keep you up at night, and it calls into question the merits of toilet paper altogether. If you take it one step further, perhaps it’s time for Americans to embrace the bidet and end this cycle of deforestation and waste once and for all.

“[Toilet paper] is totally unhygienic and you could produce the biggest roll in history and it still wouldn’t clean an anus properly,” said Rose George, the author of The Big Necessity: The Unmentionable World of Human Waste and Why It Matters. “We use water to wash everything from our bodies to our cars, and yet for the dirtiest part of our body, we choose to use a dry substance that really only moves, and doesn’t remove dirt. It’s crazy. It’s like choosing to have a shower with a dry towel. Half the world uses water to cleanse their butts, and they think those of us who have paper cultures are dirty, and they’re right.”

After Reinerman and Mitchell recruited a few other people to work on their experimental team, prototyped the giant roll, pitched it to the big bosses (who were receptive), and started testing it and running a small ad campaign on Facebook, they were ready to go public in April 2019.

“We were consistently hearing the comment, ‘I can’t believe nobody thought of this before.’ And that’s when you realize that you have something that’s improving somebody’s experience,” said Reinerman.

So they hired more people to run an e-commerce site (the Forever Roll is only sold on the Charmin website, for now), and unlike other P&G brands, they do the marketing and social media themselves. “We have a small, mighty team that is running the whole operation,” said Reinerman.

Even Charmin’s competitor had to hand it to them for coming up with the Big Roll. “If you talk to folks in the bath tissue category, the one thing we never want to happen is to run out of toilet paper in a critical moment,” said Kim Sackey, consumer knowledge lead for retail at Georgia-Pacific, the Koch Industries–owned company that makes Angel Soft and Quilted Northern. Still, she isn’t too jealous. “The Forever Roll is one potential solution; in my mind, there’s other potential ones,” she told BuzzFeed News. Subscriptions, like the kind Amazon offers, are one option, and she’s interested in optimizing the timing and quantities of subscriptions so you don’t end up with too much or too little.

Other manufacturers, including Marcal, Scott, and Cottonelle, did not return requests for comment.

To me, Rob Reinerman’s invention was a stroke of genius, a gift to the human race and all our diverse and tender holes. But as a journalist, I needed to dig deeper. Trust, but verify; wipe till it feels clean, but still look at the paper afterward. So I tested out a Forever Roll here in BuzzFeed’s office.

The stand came with a screw and its own set of mini Allen wrenches to install (pretty easy). It had a heavy base to prevent it from toppling over and felt solid. 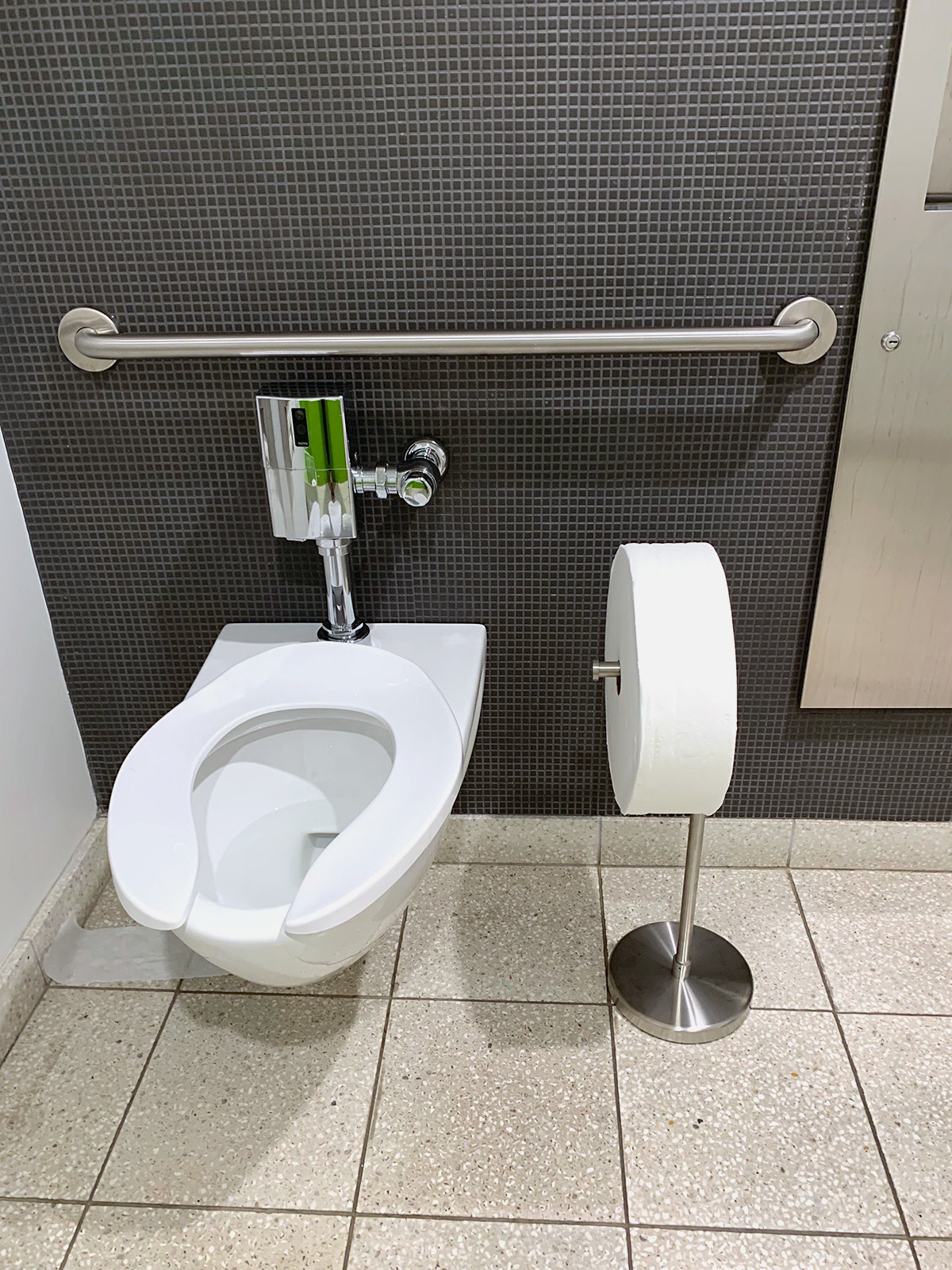 The Forever Roll inside the BuzzFeed offices.

I set up a Forever Roll in a single-use bathroom in our office, and after lunch, gave it a full test myself. It was…fine? The strangest part was that it was hard to tell how far to turn the roll to get the right amount of paper — I ended up with a little more than I needed.

Then I set up a notepad and pen in the bathroom explaining what the Forever Roll was, that I was writing an article about it, and wanted my colleagues’ feedback.

It turns out asking my coworkers to describe their toilet paper–wiping experience was perhaps a bad idea. Not a single person wrote anything down on my public notepad (I’d like to take this opportunity to apologize to my coworkers and also let HR know I’ve definitely learned my lesson here). But I did get two personal notes.

“Way too big. If you drop it on the floor and it gets wet you are losing SO MUCH toilet paper,” said one coworker. “My bathroom is small, and it would 100% get wet somehow. Too much surface area.”

My editor said while she was impressed with how smoothly the Forever Roll glided on the stand, she would be mortified for guests to see a massive roll of toilet paper in her small apartment bathroom.

To that I say, what is the price of dignity? Is it $30 for the Forever Roll starter kit? Is it never having to waddle across the bathroom, pants around ankles, to get a replacement roll from under the sink? Is it not having guests see an aggressively large toilet paper roll in your bathroom? Don’t ask me, I’m the person who just wrote a long article (which is not sponsored by Charmin, btw, BuzzFeed is literally losing money paying me a salary to do be this dumb) about toilet paper. I have no dignity, but boy am I clean. ● 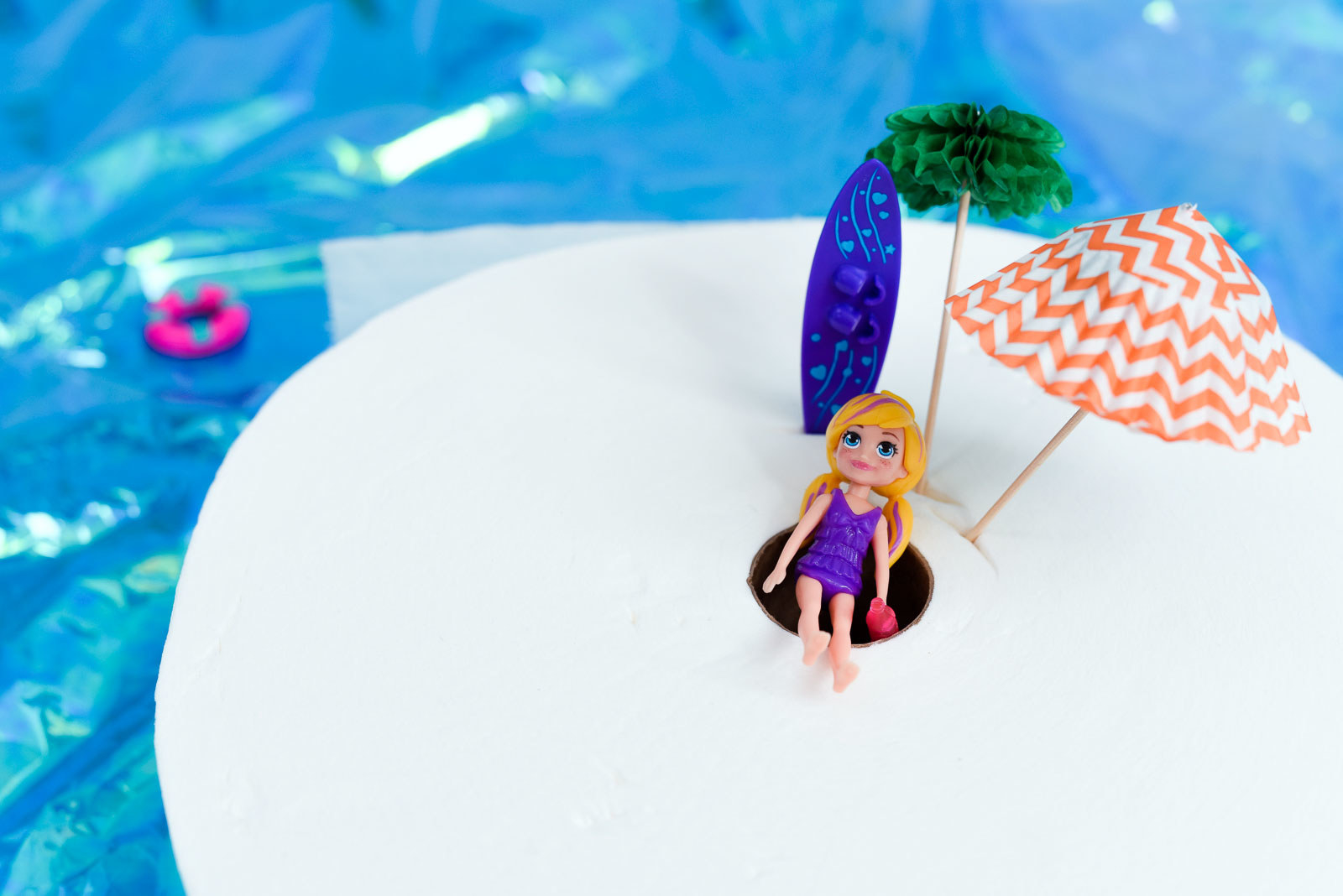