Home » Entertainment » Moshing in the Rain: The Tenuous Return of the British Music Festival

Moshing in the Rain: The Tenuous Return of the British Music Festival

A second later, several hundred rain-soaked fans — including two men dressed as bananas — began careering into one another in front of the stage, arms and legs flailing, smiling ecstatically as they formed Britain’s first legal mosh pit in 15 months.

After 10 minutes, Jim Ellison, one of the bananas, rushed out of the tent to catch his breath. “It’s so good to be back to normality,” said Ellison, 19. He acknowledged that most wouldn’t define normalcy as “a man in a banana costume moshing,” before cutting the interview short as Death Blooms started playing a song called “Life is Pain.”

“I’m really sorry,” Ellison said, excusing himself, “but I love this tune.” He ran straight back into the pit. 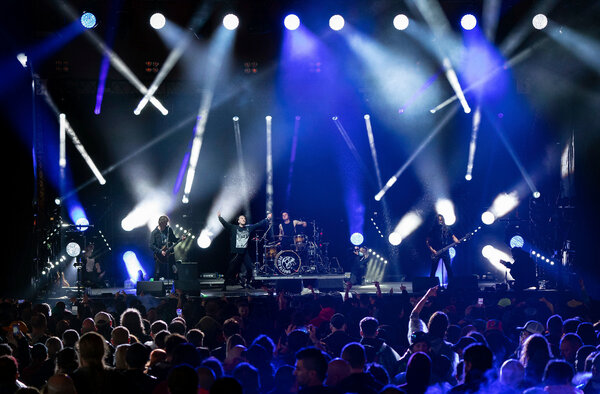 Since the 1970s, music festivals have been a key part of the British summer: events where teenagers get a first taste of parent-free vacations, music fans find community and people generally get very muddy and carefree. But there is widespread concern that few events will go ahead this year despite nearly half of Britain’s population having been fully vaccinated against Covid-19. And organizers say they risk going bankrupt.

Last week, Prime Minister Boris Johnson said that social distancing measures would continue in England until at least July 19 — almost a month after all restrictions were planned to be lifted. Within days, several major festivals were canceled for the second year in a row, with organizers saying they couldn’t afford to pay suppliers if there was no guarantee that the events would occur.

“There seems to be a whole body of evidence saying, ‘You can do outside events safely,’ but for some reason the government won’t let us,” Chris Smith, the director of WOMAD, a world music festival, said in a telephone interview. His event was scheduled for July 22, and Smith was hoping that the government would provide support so the event could go ahead.

British festivals range from world-renowned events like Glastonbury — which turns a farm in southwestern England into a temporary city for one week each year — to scrappier productions like Tribfest, an event for cover bands.

In 2019, almost 1,000 were held, attracting 5.2 million attendees, according to the Association of Independent Festivals, a trade body. That year, festivals generated 1.7 billion pounds, $2.3 billion, for Britain’s economy.

Download was initially canceled in March. This weekend’s hastily arranged special edition was able to go ahead only because it is part of a government trial to see whether and how cultural life can return safely. Previous pilot events — two 3,000-person club nights and a 5,000-capacity rock concert in Liverpool — led to eight cases of potential coronavirus transmission, according to one of the scientists involved, Iain Buchan.

Download 2021 had a significantly reduced capacity: The three-day metal, punk and hard rock festival usually sees over 110,000 hard-rock fans camp in Donnington Park — a set of fields next to a racetrack in Leicestershire, England — to watch bands like Slipknot and Slayer. But for the government trial, only 10,000 fans were allowed, and the lineup featured only British acts to avoid the risks of international travel and quarantines.

Attendees had to take a coronavirus test before going in, and agreed to also do one five days after the festival so that scientists could see whether the event caused the spread of coronavirus. But once inside in the grounds, masks weren’t required, while headbanging, moshing and drunken conversations at the camp site were prevalent.

Melvin Benn, the director of Festival Republic, Download’s organizer, said he wasn’t concerned about a coronavirus outbreak at the site given the testing system. “I probably need to be more worried about trench foot,” he said while sheltering from a downpour.

Attendees also weren’t worried about catching Covid. Harry Jackson, 26, a theater technician, said that the only anxiety he’d had around the festival was doing the pre-event test. “I sat there staring at it for half an hour going, ‘Please be negative, please be negative, I don’t want to miss this,’” he said. “I consider Download my home,” he added. “It’s my family.”

The organizers of Britain’s other festivals say they can only be sure that their events will go ahead this summer if the government creates an insurance initiative to guarantee their costs if the country delays its reopening again. Austria and Germany have adopted such programs, but the British government has not, despite pressure from politicians.

Last month, the House of Commons Digital, Culture, Media and Sport Committee, a cross-party group of lawmakers, said in a report on festivals that there would be a hole in the “lives of music lovers and makers alike” this summer as a “direct result of the government’s refusal to back insurance for the sector.”

At least one festival has found a creative solution. Last month, Brainchild — a three-day event for up-and-coming musicians and theater makers that is planned for the beginning of August — asked its 2,500 attendees to agree to be refunded only half their ticket price if the event were canceled so the organizers could start paying acts and equipment suppliers.

Only 106 people declined to lose the £60, Marina Blake, the festival’s creative director, said in a telephone interview. “It was extraordinary,” she said. “It shows people are so desperate to have something to look forward to,” she added, noting that such an initiative was probably not viable for large events.

At Download, the relief to be back at a festival was palpable. During the pop-punk act Neck Deep’s set, the singer Ben Barlow said, “This is our first gig in two years, and I never want to wait that long again.”

“If we’re the lab rats, let’s give them a good experiment,” he added, encouraging the heaving crowd to mosh. Barlow looked close to tears several times during the set.

On Saturday morning, the scene at Donnington Park was typical for a British music festival. Music fans wandered around bleary-eyed, and two interviewees said they’d decided to skip the on-site showers and instead freshen up with a combination of wet wipes and hand sanitizer.

At 11:30 a.m. James Carroll, 23, stood by a stage, waiting for the day’s music to start. He was hurting a bit from moshing the day before, he said, but it was nothing that a few cans of beer couldn’t sort out. “Day two, straight back on it,” he said.

Soon, a band called Lotus Eater took to the stage, its singer screaming into a microphone as his band created a cacophony behind him.

Immediately, the mosh pit began again. There were no men in banana costumes this time, but soon there was someone dressed as a Tyrannosaurus rex.