When the Vienna Philharmonic resumed concerts at the Musikverein in June, after shutting down for three months, it emerged from its longest period of silence in history.

Even near the end of World War II, the orchestra returned to the stage within a month of Austria’s liberation by Soviet troops in April 1945 — albeit to another hall, the Wiener Konzerthaus. The Musikverein, which had been slightly damaged by bombing, reopened that September.

With surprisingly few interruptions over the past 150 years, it is in the Great or “Golden Hall” that the Philharmonic has made history, whether performing Johann Strauss or John Williams. Here are some highlights.

The Musikverein, with its opulent interior and warm acoustics, is perhaps most famous as a monument to the 19th century where the spirit of Brahms still roams the hallways. But its shared past with the Philharmonic has of course also been shaped by world premieres.

Long before its New Year’s Concert officially began in 1939, the musicians premiered the waltz “Wiener Blut,” with Johann Strauss Jr. conducting, in 1873. 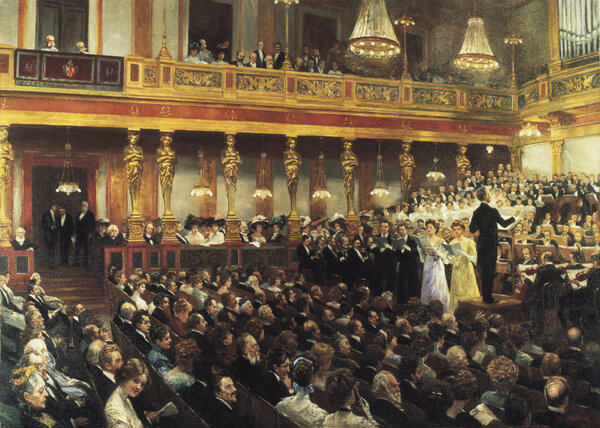 From 1873 to 1899, five of Bruckner’s nine symphonies were introduced. Perhaps more surprisingly, the conductor Hans Richter, who presided over the Fourth and the Eighth, also led the first performance of Tchaikovsky’s Violin Concerto, featuring Adolf Brodsky as soloist, in 1881.

Leonard Bernstein became the first American-born conductor to lead the orchestra when he first took the podium in 1966, and he went on to shape Philharmonic history until his death in 1990. Perhaps his most important legacy, however, was reviving the orchestra’s Mahler tradition in the postwar era.

Bernstein was known to have outbursts of emotion during rehearsal, reportedly exclaiming during a run-through of the Fifth Symphony in 1972, “You can’t play Mahler like that, that’s not the way to do it!” But when an earthquake shook the Musikverein, he was so deep in the music that, according to the Philharmonic’s archivist, Silvia Kargl, “he would have kept conducting if the musicians hadn’t stopped playing because people were running out of the hall.”

Stepping Out and Sitting In

Since 1987, the orchestra has invited different conductors to lead the New Year’s Concert. Each takes a unique approach to the event: In 2014, Daniel Barenboim exposed the mercurial nature of his position by stepping down from the podium and leaving the musicians to their own devices during a performance of the “Radetzky March.”

But there is also a history of joining the orchestra. Willi Boskovsky, who led the concert for nearly a quarter of a century, from 1955 to 1979, was known to conduct with violin in hand in the tradition of Johann Strauss Jr. In 1999 and 2005, Lorin Maazel followed suit, joining in for works by Johann Strauss Sr. and Jr. This year, Andris Nelsons made a more unusual appearance, picking up the trumpet for Johann Christian Lumbye’s “Postillon-Galopp.”

Also in January, the orchestra presented its first all-film music concert under the baton of John Williams. The Hollywood composer, making his Philharmonic debut, led excerpts such as “The Imperial March” from the “Star Wars” series; “The Flight To Neverland” from “Hook”; and the “Jaws” Suite.

The program, featuring the violinist Anne-Sophie Mutter, was recorded by Deutsche Grammophon and went on to become a best-selling orchestra album, with about 100,000 hard copies and more than 150 million streams. In February, a “live edition” is to be released, featuring bonus tracks and introductory remarks Mr. Williams made to the audience in the “Golden Hall.”