A 2013 interview where Alec Baldwin impersonates a Spanish accent while mimicking his wife and explaining her background has reemerged in the midst of the controversy surrounding Hilaria Baldwin.

The footage, filmed on “The Late Show With David Letterman” prior to the birth of Alec and Hilaria’s first child, shows Alec speaking about married life and his wife’s pregnancy. He imitates her speech multiple times throughout the interview, which has been uploaded to YouTube, and says, “My wife is from Spain … I don’t mean to be racist when I put that accent on there, by the way.”

Alec Baldwin’s statement that his wife is “from Spain” tallies with the narrative that Hilaria Baldwin has presented in media appearances, including an interview with the ”#MOMTRUTHS” podcast in April where she pointed out that her family lives in Mallorca, Spain, and added that she “moved here when I was 19 to go to NYU.”

A Twitter thread posted over the weekend threw Baldwin’s connection to Spain into question, however. The viral thread — which has since been made private — accused Baldwin of committing a “decade long grift where she impersonates a Spanish person” and contained a number of examples showing Baldwin switching between an American accent and a heavier Spanish one. The thread prompted responses from individuals who said that they knew Hilaria Baldwin as a high school student in Massachusetts, when her name was Hilary Hayward-Thomas.

Baldwin’s Creative Artist Agency speakers page, as of Monday morning, also stated that she was born in Mallorca, Spain. By that afternoon, the line had been deleted. 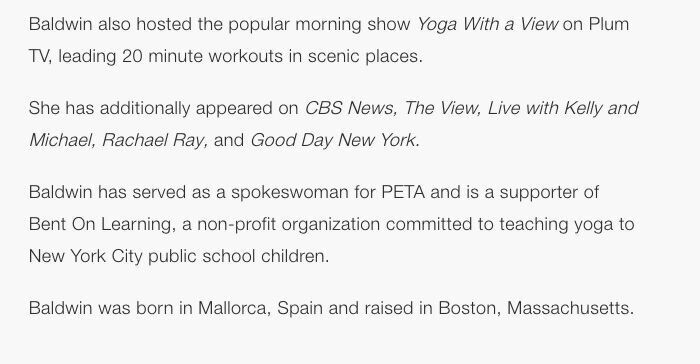 Following these revelations, Baldwin appeared in a video on her Instagram account to clarify matters. She said that she frequently switched accents due to fluency in both English and Spanish, and had told her husband upon first meeting him that she was from Boston.

“I was born in Boston and grew up spending time with my family between Massachusetts and Spain,” she wrote in the caption accompanying the footage. “My parents and sibling live in Spain and I chose to live here, in the USA. We celebrate both cultures in our home — Alec and I are raising our children bilingual, just as I was raised. This is very important to me. I understand that my story is a little different, but it is mine, and I’m very proud of it.”

Alec Baldwin has supported his wife with his own video, calling the allegations surrounding her heritage “ridiculous.”

A New York Times piece published on Wednesday quoted a former dance partner of Hilaria Baldwin who told the paper that it “was always her desire to be considered Spanish.” The article revealed that Baldwin and her family visited Spain frequently when she was a child, and her parents moved to Mallorca in 2011.

“The things I have shared about myself are very clear,” Baldwin told the Times. “I was born in Boston. I spent time in Boston and in Spain. My family now lives in Spain. I moved to New York when I was 19 years old and I have lived here ever since. For me, I feel like I have spent 10 years sharing that story over and over again. And now it seems like it’s not enough.”