Home » Entertainment » Online, Simon Rattle Gives a Preview of His Future in Munich

Online, Simon Rattle Gives a Preview of His Future in Munich

In an evening of back-to-back concerts recently, the Bavarian Radio Symphony Orchestra played music that asks the big questions: Is there a God? What are we to make of war and death? How do we perceive the world around us?

But perhaps the biggest question was the one raised by the concerts themselves: What will the future of this orchestra look like under its new chief conductor, Simon Rattle?

These livestreamed performances, along with a third last Friday — all available on demand from BR-Klassik — were his first with this ensemble since he was named to the post in January. And while they offered glimpses of the Rattle era to come in 2023, they more urgently provided an assurance that this excellent orchestra, previously led by Mariss Jansons until his death in 2019, will be in good hands.

The news of Rattle’s hiring came with an announcement that shocked the classical music world: He would also be stepping down from the helm of the London Symphony Orchestra, where his arrival in 2017 had been heralded as a homecoming for a globally acclaimed British conductor. (He will stay on, partially, in an emeritus position.) 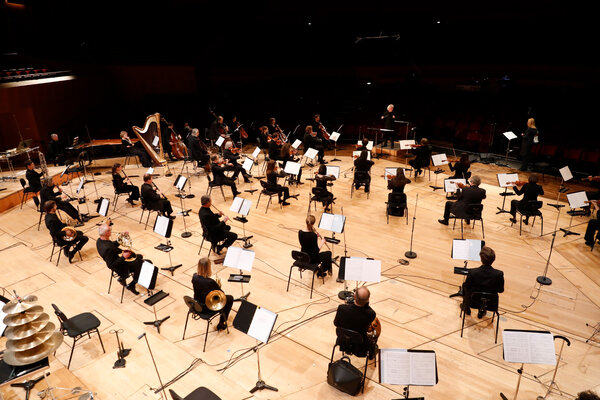 The reason for the move to Munich, Rattle has said, is personal: He wants to spend more time with his wife, the mezzo-soprano Magdalena Kozena, and their children, at home in Berlin, where he was the chief conductor of the Berlin Philharmonic from 2002 to 2018. But it’s difficult to ignore the coincidence of Brexit, which he has sharply criticized and which took effect in January, threatening the livelihoods of British musicians who had benefited from the ease of open borders. (Not for nothing did he also announce that he had applied for European citizenship.) And it’s maybe not so coincidental that last month, London officials scrapped plans for a much-needed new concert hall there — a project with no greater champion than Rattle.

The construction of a new hall, and the headaches that go with it, await him in Germany. But, like the start of his tenure with the Bavarian Radio Symphony Orchestra, that is years away. In the meantime, there was something of a preview in the three recent livestreams — contemporary-minded programs for the Musica Viva series, and a deceptively traditional one of works by Brahms, Stravinsky and Haydn. Rattle is a clever programmer, with an open ear and an unrelenting commitment to living composers. And he has a gift for, even an insistence on, clarity within chromaticism and complexity.

Crucially, the musicians appear to respond well to Rattle’s direction, an affinity that probably was honed during his appearances with the orchestra since his debut with the orchestra in 2010. Since then, he has recorded three albums with them: a sometimes frustrating take on Mahler’s “Das Lied von der Erde” and burning accounts of Wagner’s “Das Rheingold” and “Die Walküre.”

Rattle made more of a statement, though, with his latest concerts, which covered roughly 325 years of music history and opened at the Philharmonie in the Gasteig with a world premiere: Ondrej Adamek’s “Where Are You?,” an unruly song cycle for mezzo-soprano and orchestra. It was written for Kozena, and began with her waving her arms in what looked like a breathing exercise, then revealed itself as extended technique — her vocalise matched by the primeval airiness of a flute.

In 11 songs that flow together in an unbroken monologue, the soloist continuously wrestles with questions of faith, drawing on sources in Aramaic, Czech, Moravian dialect, Spanish, English and Sanskrit. Words are stripped down to elemental syllables, repeated with chattering anxiety or prolonged with wide, sirenlike vibrato. Occasionally the work’s modernist tropes, which peak with the use of a loudspeaker, are pierced by stylistic interjections: a fiddling folk song, Eastern idioms. There may be a point here about universal experience, but it’s too often muddled by the work’s impatient focus.

Who’s to say what effects Adamek’s contrasts would have had in person? Unlike soloists and chamber groups, orchestras are particularly ill-suited for the virtual performances made necessary by the pandemic. Large ensembles are complex organisms, at constant risk of being flattened online. Video is fine as a document, but it remains a poor substitute for the concert-going experience.

That was especially evident in the piece that followed, Messiaen’s “Et exspecto resurrectionem mortuorum.” Premiered within the Gothic grandeur of the Sainte-Chapelle in Paris and intended for vast spaces, this work can be overwhelming, a vision of the apocalypse. But its resonance — acoustic and otherwise — felt stifled here, clearly recognizable but inaccessible.

After that concert, Rattle hopped across the Isar river to the Herkulessaal, the orchestra’s home at the Residenz in central Munich, for a program of Purcell’s 17th-century “Music for the Funeral of Queen Mary” and Georg Friedrich Haas’s “in vain” (2000), which Rattle, during a pretaped interview, described as “one of the few pieces from this century that we already know will have a life for all the centuries afterwards.”

Rattle’s reverence for the Haas shone through in what amounted to a faultless reading of the score, which calls for a lighting scheme to match the shifting tones and textures, rendering any performance more of an installation — at times, in total darkness. The experience of “in vain” is specific to the point of exploring, and raising questions of, the relationship between a composer and musicians, and in turn the audience. Yet as I watched the players navigate their instruments blindly, I was sitting near an open window, bathing in the warmth of the midday sun and enjoying the freshness of spring’s awakening.

If there is a benefit to pandemic-era programming, it’s scale. Because of their relative safety, works traditionally overlooked because of their small size have flourished. Hence Friday’s livestream from the Herkulessaal, a program of familiar names and less-familiar music: Brahms’s Serenade No. 2 in A, sweetly plain-spoken and elegiac; Stravinsky’s “Symphonies of Wind Instruments,” its distinct threads gracefully and harmoniously entwined; and Haydn’s Symphony No. 90 in C, a little smushy at first but settled into with crisp playfulness.

The Haydn has a false ending: a joke at the expense of the audience members, who often applaud then laugh at themselves as the music goes on. With no one in the hall, the punchline fell flat, more of a “heh” than a “hah.” But, as Rattle said in an interview with BR-Klassik, he is just getting started on a long journey with the Bavarians, and he plans to program Haydn, a personal favorite, more in the future. When that happens, the symphony can tickle its listeners again. Because they know that after the pause, the orchestra comes back. It always does.