Home » Entertainment » Prince William Says He Did Not Bully Meghan Markle, Went On Record to Prove it

Prince William Says He Did Not Bully Meghan Markle, Went On Record to Prove it 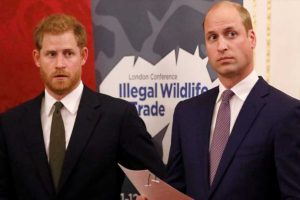 Not today, tabloids — Prince Harry and Prince William have teamed up to shoot down an “offensive” and “potentially harmful” report published by the U.K.’s Sunday Times. In a rare joint statement, the brothers took the newspaper to task for claiming that William’s attitude toward Meghan Markle was largely to blame for the Sussexes’ surprising decision to step back from their roles in the royal family.

Only that’s not the way things shook out, say the brothers. “Despite clear denials, a false story ran in a UK newspaper today speculating about the relationship between The Duke of Sussex and The Duke of Cambridge,” the royal sibling said in a rare joint statement released by respected Harper’s Bazaar royal editor-at-large Omid Scobie. “For brothers who care so deeply about the issues surrounding mental health, the use of inflammatory language in this way is offensive and potentially harmful.”

On Sunday, the Times claimed that Harry and Meghan were pushed out of the royal family by the “bullying” behavior of Prince William — particularly towards Meghan. Per the publication, Harry didn’t feel as though William was welcoming enough to Meghan when she and Harry got serious. And after two years of “constantly being told their place,” the Sussexes decided enough was enough.

The Times also claimed that William was deeply saddened by Harry’s decision to step away from the royal family. “I’ve put my arm around my brother all our lives and I can’t do that anymore; we’re separate entities,” William reportedly told a friend, per the Times. But while there is likely a kernel of truth in that (he may very well be sad not to spend as much time with his brother anymore), the reality is the brothers have been forging separate paths for a while now. It has less to do with Meghan and more to do with their scope of responsibility within the royal family.

Last week, Harry and Meghan made the announcement that they planned to “carve out a progressive role” within the royal family. They then unveiled their tentative goals and plans via their official website, SussexRoyal.com. The gist? The couple hopes to become more “financially independent” and to use their influence to both support the royal family’s goals and initiatives while also forging their own for the greater good.

Although Harry and William clearly agree that William was not the root cause of the decision, their late mother Princess Diana may have been (in a way). Harry has opened up more than once since marrying Meghan about his feelings toward the press that essentially blames for the car crash that resulted in his mother’s death. And during an appearance on the U.K. show The One Show, Harry’s friend JJ Chalmers revealed, “I think the decision that he has made, at the forefront of that is to protect his family, because that’s the number one rule is to be a father and a husband. Any husband wants to protect their wife and any father wants to protect their children.”