Prince William and Kate Middleton showed a united front on Thursday with a color-coordinated public appearance in Liverpool — their first after the publication of Prince Harry’s memoir, Spare. It was inevitable that someone in the press corps was going to dare ask the question about the book — and it was awkward.

As the Prince and Princess of Wales bid goodbye to their hosts, a reporter in the crowd shouted at William, via an ITV News video, “Your Royal Highness, have you had a chance to read your brother’s book at all?” There it is, the elephant in the room. It was bound to happen at some point, but with William giving a tight smirk, you could tell the moment was tense for him.

The palace’s decision not to comment about Harry’s memoir doesn’t make things any easier for any senior royals in their upcoming appearances. It puts more pressure on everyone instead of issuing one blanket statement about this being a family matter and they will handle it behind closed doors. See how easy that was? But King Charles III has decided to let the memoir simmer in the court of public opinion, which will only make the issue even bigger over time.

Harry’s book has turned out to be a worldwide hit, selling over 1.43 million books in the first 24 hours in the United States, Canada and the U.K. — a publishing record for Penguin Random House (and that’s only for the English-language edition). The communications team at the palace needs to come up with a better PR strategy than this because awkward encounters are really not a professional way to handle what has become a family crisis.

Before you go, click here to see the best photos of Prince Harry and Prince William growing up together over the years. 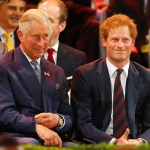