While on the set of “In the Heights,” screenwriter Quiara Alegría Hudes wanted to make sure every detail about every character was right, down to their shoes.

For the scenes set at the salon owned by Daniela (Daphne Rubin-Vega), some of the movie’s executives wanted hypersexualized salon workers, asking if the production team could find a “Latina bombshell” — perpetuating “this very limited version of what Latino beauty looks like,” the Pulitzer Prize-winning playwright recalled in an interview.

“I was like, ‘No, that is not happening.’ If you go down the street to get your nails done, to get your hair done, that is not what those salons look like,” Hudes said. “They’re not all buxom, in skintight clothes and stiletto heels. I was like, if I see stiletto heels on one of those salon employees, I’m gonna freak out because they’re working women, and they’re on their feet, and they’re on their knees for eight hours a day doing manual labor, you know? They’re wearing comfortable shoes! If I don’t see them in comfortable shoes, it’s bullshit.”

It was the importance of these kinds of decisions that made Hudes fight to not only be the film’s screenwriter but one of its producers as well.

“In the Heights,” premiering in theaters and on HBO Max on June 11, follows bodega owner Usnavi (Anthony Ramos) and his friends and neighbors in New York City’s Washington Heights during a summer heat wave. As each character tries to beat the heat, they take audiences on a musical journey through a slice of their lives: their hopes and dreams, their fears and frustrations.

Hudes knows that the highly anticipated movie adaptation of her and Lin-Manuel Miranda’s Tony-winning musical represents a pivotal moment for Latinx representation in Hollywood. Over the years, the dismally low level of Latinx representation in big-budget movies and television has been especially galling given how Latinx audiences are a hugely powerful and influential force. At the box office, for several years running, they’ve had the highest per capita attendance of any ethnic group, according to the Motion Picture Association. But on screen they make up only 4.5% of speaking characters in the top-grossing Hollywood movies.

So it’s vital that a story like “In the Heights,” which features a range of three-dimensional Latinx characters at the center of their own narratives, exists. And it’s vital that storytellers like Hudes get to hold positions of power and influence.

“I was like, ‘I need to see the pots and pans because the way pots are used in American cooking is very different than in Cuban cooking and Caribbean cooking,’” Hudes said. “So I needed to approve the serving spoons even. It’s down to this level of granular detail that makes the world feel real.” 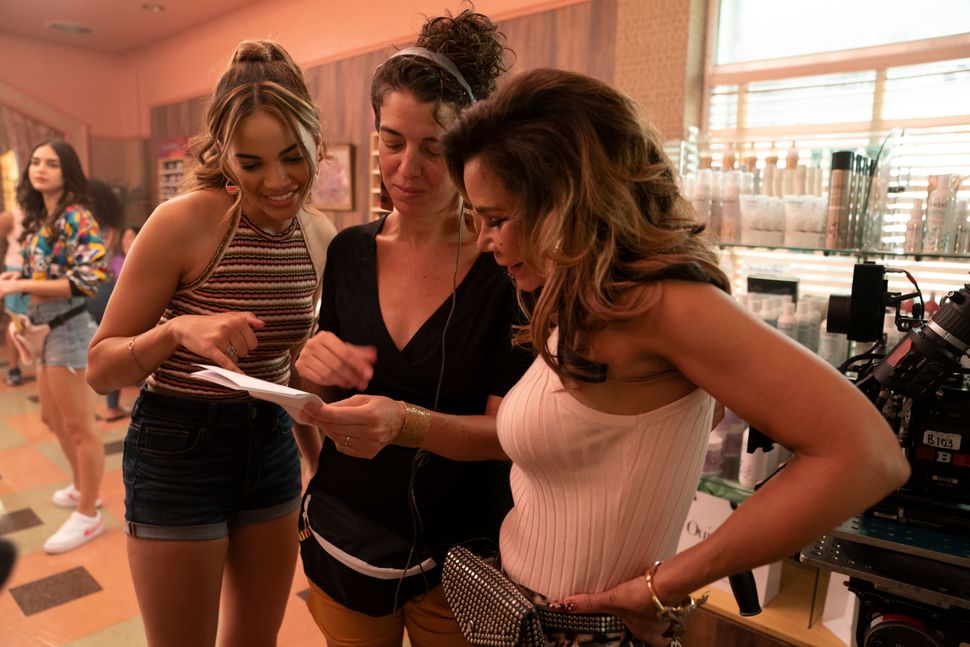 The myth that movies by and about people of color “won’t sell” still lingers, despite so much evidence to the contrary. For instance, there have been a number of reports demonstrating the ways Hollywood is actually leaving money on the table when it doesn’t prioritize diversity and representation. There’s still a great deal of pressure on the relatively few big-budget movies by creators of color that Hollywood does greenlight, creating the worry that if one movie doesn’t succeed, maybe there won’t be another chance.

“If I was only the screenwriter, I would not think about that,” Hudes said of that pressure. “I would just think, on an artistic level, [about] trying to write the best story possible and to just make it a great piece of writing and storytelling and create great roles. But that’s why I wanted to come on board as a producer, too, because unfortunately, like it or not, there is that pressure to do it really, really well.”

That meant making sure all of the food in a key dinner scene toward the end of the movie was “not only correct but was going to be next level, like B-side deep cut, you know, inside baseball, good stuff for the Latino crowd,” she said. The decor in the apartment where Abuela Claudia (Olga Merediz) lives had to look real, and it needed to be “really authentic to an older generation in these old apartments.”

The road to getting “In the Heights” from the Broadway stage to the big screen has been a long and winding one, made even longer by the pandemic, which delayed the film’s release date by a year. Ever since the musical took Broadway by storm in 2008, plans for the film adaptation bounced around different studios, directors and producers (at one point, convicted sexual abuser Harvey Weinstein was slated to produce the movie, shortly before the bombshell reports about his serial sexual abuse came out in 2017).

In the meantime, Hudes continued her work as a prolific playwright and in championing Latinx stories on stage. In 2012, she won the Pulitzer Prize for Drama, for her play “Water by the Spoonful,” after twice being named a finalist, including for “In the Heights.”

Over the years, Hudes wrote many drafts of the “In the Heights” screenplay, making changes based on each studio and each set of executives’ expectations and constraints. It was frustrating, she said, especially the number of times executives would bring up the many misconceptions about diversity and representation, which are often used to advocate against making movies by and about Latinx people and other underrepresented groups.

“There was this assertion that ‘there’s no Latino stars,’ which was a very frustrating conversation to have over and over again because, first of all, it wasn’t true,” she said. “But the second conversation that was challenging was: ‘Well, you have to use the established Latino stars, whether or not they fit the roles appropriately.’”

The project eventually landed at Warner Bros., and there was a seismic shift after the 2018 release of director Jon M. Chu’s “Crazy Rich Asians,” a landmark moment for Asian representation in Hollywood. The film’s massive success — becoming the highest-grossing romantic comedy in a decade and turning then-unknown actors, including Henry Golding, into marquee stars — helped prove that all of those long standing myths weren’t true. Chu, who had already been attached to direct “In the Heights,” had a similar vision for it: casting a mix of veteran actors and new talent who could become the next great movie stars, and making a big, splashy, joyous movie.

“For Jon, that was like, you know, really making it as Hollywood and cinematic as possible, a real sense of pride and arrival for Latinos in Hollywood,” Hudes said of Chu’s vision. “But he and I were both so interested in just the human stories, the everyday human stories.”

Through her work adapting the musical to the screen, Hudes learned about what works on stage versus on film, and different ways to avoid the awkward “characters suddenly breaking into song” transition and other pitfalls of movie musicals. And though it was painful to have to cut some songs and scenes, she discovered how the medium of film can sometimes allow an emotion to be conveyed more efficiently, such as through a quick close-up rather than a whole song.

Chu also approached “In the Heights” as a way to build a bench of more Latinx creators, becoming an advocate for her, according to Hudes. She said the director “took me under his wing” during the film’s production, making sure there were ample opportunities for her to have a seat at the table, and he even got her to direct a few scenes.

“He wanted me to come stand by him in a lot of shots and watch what he was watching from his point of view. Sometimes it was because he wanted to consult with me on something: ‘Are we capturing this right?’” Hudes recalled. “But a lot of times, he wanted to groom me, honestly, to see what it takes to make a film so that I would become more invested in the genre and stay in the genre. He’s trying to build something. He has his eyes on a big prize in terms of what the industry can be and what it can do, and I think he was pulling me into that mission of having more Latino filmmakers, more filmmakers of color, and saying, you know, ‘We are part of this great American narrative.’”

Hudes is excited about the possibilities of what “In the Heights” could mean for so many kinds of Latinx stories and creators.