MARSEILLE, France — The performance at the La Criée theater here, for a small number of invited guests and dance professionals, started just a few hours before President Emmanuel Macron announced the start of a third national lockdown. Although theaters have been closed since November, performers have been able to go on working and rehearsing; the filming of ballets, operas and plays is allowed, often with small invited audiences. Because going to work is allowed if a job can’t be done from home, these events don’t break any rules.

So we were all happily at work on Wednesday afternoon, when the Ballet National de Marseille performed a mixed bill featuring mostly new work by four female choreographers: Lucinda Childs, Tânia Carvalho, Lasseindra Ninja and Oona Doherty. It was the first time since the performance collective La Horde took over the artistic direction of the company in 2019 that the dancers had performed works by outside dance-makers, and much of the program had to be taught and rehearsed on Zoom. (Pandemic permitting, the Theater de la Ville will present the program, July 16-19, at the Châtelet Theater in Paris, and it will eventually be available online.) 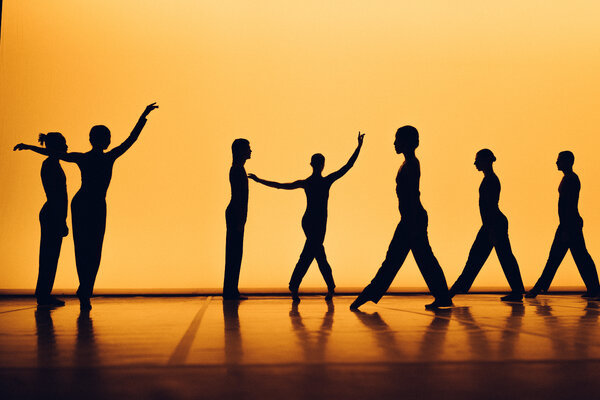 The first piece on the program, Childs’s “Tempo Vicino,” wasn’t new, but it hadn’t been performed by Ballet National de Marseille since it was created for the company in 2009. Childs is the elder stateswoman of this group, and her craftsmanship and accomplishment are evident in every moment of this piece for eight dancers, still slightly tentative in their execution here.

Like almost all of Childs’s works since the late 1970s, “Tempo Vicino” is a marvel of rigorous patterning and geometric pathways. What’s surprising is the music, John Adams’s “Son of Chamber Symphony,” which is more varied and less rhythmically regular than usual for him, piling on jazzy syncopations, thematic phrases and brassy flares of sound. This gives the dance more heat and changing energy than many Childs pieces have, as does the swirling partnered work. Gradually the thrilling precision and permutations, the alternations between motion and stasis, come to feel like a kind of virtuosity, a world of cool perfection you’re sorry to leave.

Carvalho, a Portuguese choreographer, is equally interested in precision, but not so much in steps. Her new “One of Four Periods in Time,” to a ticking electronic score by Vasco Mendonça, is intermittently intriguing as the dancers grimace and gesticulate while moving with exaggerated splayed legs, or on all fours, around the stage. They teeter, they pose like demented puppets, they move with mouths stretched open, eyes screwed tight. Moment by moment, it’s interesting, but the work doesn’t jell into anything more coherent across its two sections.

Lasseindra Ninja’s “Mood” is also new and also a little incoherent. But it’s so full of life, energy and, yes, mood, that it’s hard to care. Ninja, a voguer and a prominent member of the Paris ballroom scene, had never previously created a stage work; here, she cleverly doesn’t attempt to reproduce the individual display or battle context of the balls.

Instead, she integrates some of that vocabulary into a broader dance spectrum, opening with three male dancers in glittery flesh-toned bodysuits slowly reaching out their arms as they toss their bodies from side to side to the insistent beat of Boddhi Satva’s “Maboko Na Ndouzou.” When the ensemble dancers enter they are wearing white leotards, high-heeled boots and platinum wigs. Later they change into worth-the-price-of-admission cotton-candy pink bondage outfits.

The crowd sections initially seem less compelling than the solos (there is a particularly superb hurtling, rubber-limbed turn from Nahimana Vandenbussche) and small-scale groupings, which incorporate some of the dramatic, referential poses of vogueing and its sense of dramatic self-expression and personal liberation. The ensemble dancers, with their outlandish, ultrafeminine, sexualized costumes, do a lot of leg splaying and bottom thrusting; after a while this starts to read as a political comment on women’s bodies, experiences and choices.

Doherty’s “Lazarus” asks the dancers for an extraordinarily quick shift of focus. The short piece, developed for this program, comes from a section of her solo work, “Hope Hunt and the Ascension Into Lazarus,” in which Doherty, an Irish choreographer, incarnates shifting ideas of masculinity. The group work multiplies her lone figure, moving through haunting, blink-of-the eye shifts of position and emotion. Although Doherty is irreplaceable as a solo performer, the work has other strengths in this multiplied guise; the 22 dancers are subtly different, each a lone figure of confidence, fear, aggression, helplessness and, perhaps, hope.

The Marseille dancers, many of whom performed in all four works, deserve much praise for their commitment to these wildly different dance styles. As Doherty said, in a post-show discussion on Zoom, beamed onto the stage: “Four completely different things; that’s a nice night in the theater.”