It takes only two oscillating notes to establish a world. The coyote howl that Ennio Morricone wrote for “The Good, the Bad and the Ugly” immediately conjures an idea of the American West: desert, tumbleweeds, gunslingers.

To hear those notes and see ballet pointe shoes thrown down like gauntlets is a joke. This is how Pacific Northwest Ballet’s latest digital program begins, with the Morricone theme playing over a montage of dancers rehearsing in masks, warming up, preparing for a show. The sequence is tongue-in-cheek but also establishes something serious: This excellent company is still at work, making and performing new dances.

The program, available through Monday on the company’s website, includes two premieres. The first, Donald Byrd’s “And the sky is not cloudy all day,” is the source of the Old West theme. Byrd has made a cowboy ballet, in the tradition of “Billy the Kid” and “Rodeo.” The music isn’t by Morricone; it’s selections from “John’s Book of Alleged Dances” by John Adams, and “Home on the Range” (from which the dance takes its title). But the idea is clear. Men in cowboy hats, jeans and boots strike gunslinger poses and dance in front of a Western landscape. 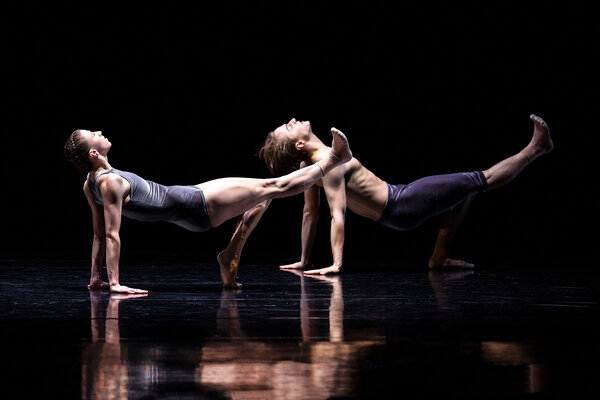 It’s not much of an idea, and it’s disappointing from Byrd, who can usually be counted on for a strong point of view, especially on matters of history and race. In a program note, he describes the work as a dream ballet, a nostalgic vision from his imagination when he was a boy playing cowboys and Indians “and nobody wanted to be the Indians.” The note is aware of what the myth leaves out and occludes (displacement, genocide). The ballet isn’t.

It does have a dreaminess, though this registers mainly as sluggishness and sloppiness, compounded by the way that boots blunt ballet footwork. Two final solos bring more focus: one pushing against narrow notions of masculinity with rolling hips, shoulders and wrists; the other pressing the analogy between the spread thighs of a horseman and ballet turnout. Yet the formal pressure isn’t enough to justify the cloudless make believe.

There’s an odd absence as well in “Future Memory” by the company’s resident choreographer, Alejandro Cerrudo. “Is there any anger in your work?” a voice asks at the start. “Of course there is,” another voice answers, but doesn’t specify further. Neither does the choreography.

What we get instead is never-ending undulation, a numbing beauty set to a playlist of music that might be labeled “Sounds for a Relaxing Bath.” The Möbius-strip partnering is plenty ingenious, showing off the dancers’ strength, flexibility and fluidity. But like Byrd’s note about what his ballet leaves out, the question about anger appears to acknowledge an awareness of something missing. Both choreographers seem to want to provide comfort food but struggle to make the choreography its own defense.

Despite these shortcomings, however, the program still feels full, even generous, graced by Pacific Northwest’s top-of-the-line musicians and stuffed with bonus features. And it ends with a work that does justify itself, moment to moment: Alexei Ratmansky’s “Pictures at an Exhibition.” A 2017 recording of a dress rehearsal doesn’t draw out all the particularity — the moods, colors, characters — that Ratmansky finds in the Mussorgsky score. But the performance has more than enough of all that to serve as a vision of the recent past that’s inspiring in the still-precarious present.