Home » Review: Walking in Light on the High Line

Review: Walking in Light on the High Line

First we saw them, bright loops of light, walking. Then as they approached, we heard: vocal harmonies holding, shifting, droning, keening; a shared sound of moving parts, in search of something but in no hurry to find it.

So began Okwui Okpokwasili’s “On the way, undone,” a processional performance at the High Line. Okpokwasili and three colleagues (Mayfield Brooks, Anaïs Maviel and Samita Sinha) were the walking lights, outfitted in headdresses of illuminated coils that looked like abstracted models of the solar system worn as crowns. And these performers were the sound, their voices amplified by speakers they dragged behind them on wheels.

The work is a homage and farewell to Simone Leigh’s “Brick House,” a giant bronze bust of a Black woman that has been installed on the High Line since 2019 and is leaving at the end of the month. But “Brick House” presides over 10th Avenue at 30th St. And we — the audience and the performers — were in the covered passageway between 14th and 15th streets. We had some distance to travel. 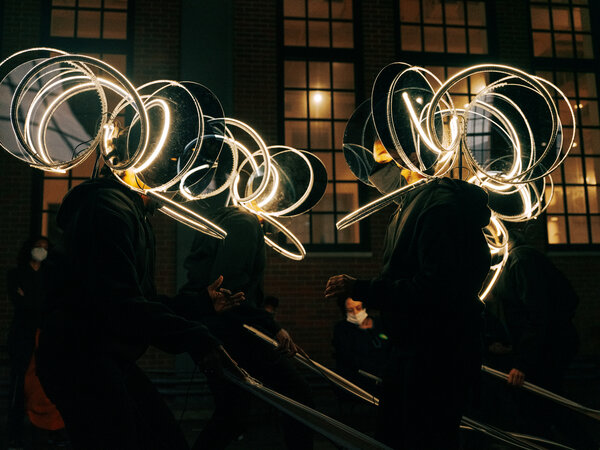 At first, the going was quite slow. As we sat in folding chairs, the four pilgrims inched through the passageway, intoning phrases like “Where do your wanderings take you?” Facing forward or backward, they bent in both directions, as if under burdens. Sometimes, they rocked in place, shifting weight in a kind of prayerful boxer’s bounce. But all this motion didn’t speed their progress. There was a suggestion of doing and undoing.

This beginning had much to do with the slow walking and collective vocalizing in Okpokwasili’s continuing project “Sitting on a Man’s Head.” But where that work is circular and exploratory, this one had a more linear shape, with a predetermined destination and a track to follow. The four finally emerged from the enclosure, on their way, pulling a now ambulatory audience in their wake.

In this transition between enclosed and open spaces, I felt a huge sense of expansion, as if the sound had suddenly stretched to the sky. The next moment, though, the volume diminished, and the performers seemed to grow smaller and more vulnerable along with it. I became conscious that the performers and I were in motion together, the distance between us extending and contracting.

I thought of this effect later, when Okpokwasili, still en route, told a funny, fable-like story about mouthing off to the sun. In the story, the sun’s rejoinder is to show the speaker how she is trailing time, standing still but spinning, slow and fast all at once. Metaphorical suggestions resonated with experiential ones.

By this point, the procession had both accelerated (nearly to a run) and lost intensity, having left much of its original audience temporarily behind. This spreading out left room, though, for conversations and the experience of an evening stroll on the High Line — cutting through the city at an unusual altitude, walking through a narrow park framed by apartment windows — an ordinary New York pleasure colored by the quizzical looks that the electrified vocal quartet drew from High Line residents and visitors.

These days, the uptown journey on the High Line can feel like a pilgrimage to Hudson Yards. But this time, we took a turn onto the spur that bridges 10th Avenue, the site where “Brick House” sits, eyeless and imperious. In the end, “On the way, undone” underscored how Leigh’s mighty lady has altered the city for good, and how she will be missed.

On the way, undone

Through Thursday at the High Line; thehighline.org