Home » Entertainment » Rip Torn, an Outsize Presence Onstage and Off, Is Dead at 88

Rip Torn, an Outsize Presence Onstage and Off, Is Dead at 88

Rip Torn, an actor who made his reputation in the works of Tennessee Williams and played roles as diverse as Walt Whitman, Richard Nixon and Judas Iscariot before earning his greatest fame as a gruff, bullying producer on one of the most acclaimed television comedies of the 1990s, died on Tuesday at his home in Lakeville, Conn. He was 88.

The death was announced by his publicist.

On “The Larry Sanders Show,” which starred Garry Shandling as the neurotic star of a late-night talk show and ran from 1992 to 1998 on HBO, Mr. Torn played Artie, the show-within-a-show’s tough-as-nails producer, and stole every scene he entered. His character was so fiercely loyal that when Larry’s wife locked Larry out of their bedroom, it was Artie who broke down the door. When a drunken writer half Artie’s age tried to rush the stage while the show was on the air, he tackled the young man to the floor without a second’s hesitation.

Mr. Torn’s outsize performance brought him six Emmy Award nominations for outstanding supporting actor in a comedy series. He won the award in 1996.

[Read about some of Rip Torn’s most memorable onscreen roles.]

Almost 30 years earlier he had received Obie Awards for his Off Broadway work, as an actor in Norman Mailer’s “The Deer Park” (1967) and as the director of Michael McClure’s “The Beard” (1968). But despite the critical accolades he consistently received in the following decades, other awards were elusive. 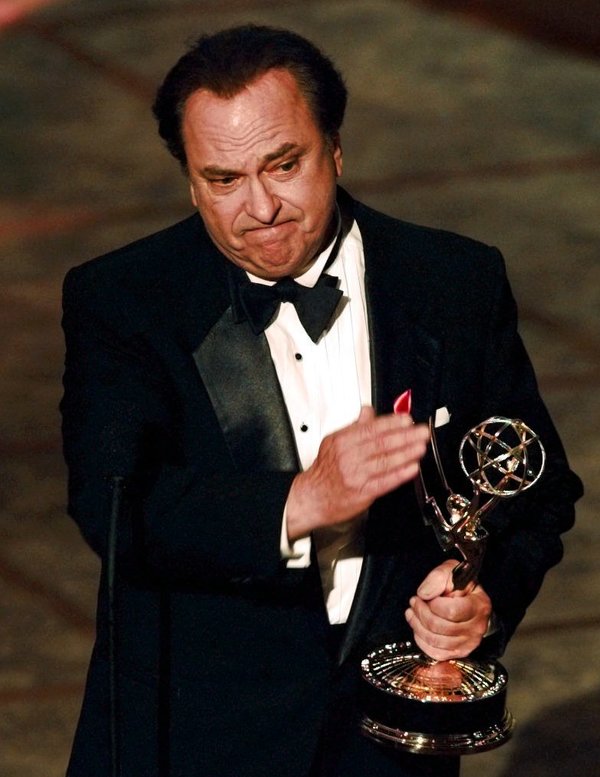 His last performance on Broadway, as a self-deluding Texan in Horton Foote’s drama “The Young Man From Atlanta” (1997), was warmly received. Ben Brantley of The New York Times cited Mr. Torn’s “imposing quality of emotional largeness,” which he said “brings mythic dimensions to this small-scale drama without bursting its seams.” But to the surprise of many, he was not nominated for a Tony Award.

In fact, in his long career on both stage and screen he was nominated for only one Tony, for his performance as a sadistic young man in Williams’s “Sweet Bird of Youth” (1959), and one Oscar, for his role as a hard-drinking backwoodsman in “Cross Creek” (1983), Martin Ritt’s drama about the author Marjorie Kinnan Rawlings, who was played by Mary Steenburgen. He did not win either time.

His reputation for volatility was one likely explanation. As he once acknowledged, “I get angry easily.”

In what is probably the most famous example, in 1968 Mr. Torn was filming “Maidstone,” an underground film written and directed by Mailer. Mailer was also the star, playing a writer running for president. Mr. Torn played his half brother. In a decidedly unscripted moment, Mr. Torn struck Mailer with a hammer; Mailer responded by attacking Mr. Torn and biting his ear. The fight became the centerpiece of the film.

Later in life, Mr. Torn professed to have mellowed. In 1997 he told The Los Angeles Times: “I just don’t give people trouble anymore. I say, ‘Excuse me, I only fight with friends.’ And I walk away.”

Or at least he had moved on to fighting in court. Dennis Hopper told a story on “The Tonight Show” in 1994 about how Mr. Torn had pulled a knife on him during an argument in the 1960s. (It was apparently as a result of this argument that Jack Nicholson and not Mr. Torn was cast as the Southern lawyer in Mr. Hopper’s hit film “Easy Rider.”) The way Mr. Torn remembered it, Mr. Hopper had pulled a knife on him, not the other way around, so he sued for defamation. He won.

Yet Mr. Torn maintained his bad-boy image to the end. He was arrested on drunken-driving charges several times in his 70s. In 2010 he was arrested after breaking into a Connecticut bank at night with a loaded gun in his possession. Explaining that he had been intoxicated and thought the bank was his house, he pleaded guilty to reckless endangerment, criminal trespass, criminal mischief and illegally carrying a firearm. He was given a suspended sentence and placed on probation for three years; during his probation he was subject to random drug and alcohol testing.

His brushes with the law may have defined Mr. Torn’s image for many people; he often suggested that this image and his political activism — he was an avid leftist — cost him work. But it was his acting that established his reputation.

He made his mark early.

Elmore Rual Torn Jr. was born on Feb. 6, 1931, in Temple, Tex., a small city north of Austin. He was the son of Elmore Torn, an economist, and the former Thelma Spacek (the actress Sissy Spacek was a cousin). He inherited the nickname Rip from his father.

The younger Rip attended Texas A&M College (now Texas A&M University), where he studied agriculture, but transferred to the University of Texas, where he switched his focus to drama. After graduating, he served in the Army for two years before moving to New York to study at the Actors Studio.

He played a small, uncredited part in Elia Kazan’s Southern Gothic film “Baby Doll” (1956), written by Williams, and a credited one in “Time Limit,” a 1957 drama starring Richard Widmark as an Army officer accused of treason. He also became a familiar face on television anthology series like “The United States Steel Hour” and “Kraft Theatre.”

His first two Broadway appearances were in Williams plays directed by Kazan. In 1956 he took over the lead male role, Brick, in “Cat on a Hot Tin Roof” toward the end of its run. Three years later he was in the original cast of “Sweet Bird of Youth.”

That play was good to him: Tony-nominated for his supporting performance as Tom Finley, the brother of the lead character’s old girlfriend, Mr. Torn eventually took over the lead role, the drifter Chance Wayne, from Paul Newman. He, Newman and Geraldine Page, Mr. Torn’s future wife, who played the faded movie star Chance takes up with, all reprised their original Broadway roles in the 1962 movie version. When “Sweet Bird of Youth” was adapted for television in 1989, Mr. Torn played yet another role: the vengeful Boss Finley, Tom’s father. (Among his other TV roles was the dying Southern patriarch Big Daddy in a 1984 adaptation of “Cat on a Hot Tin Roof.”)

His movies ranged from the gritty drama “The Cincinnati Kid” (1965) to the biblical blockbuster “King of Kings” (1961), in which he played Judas, to escapist fare like “The Beastmaster” (1982) and “RoboCop 3” (1993). Mr. Shandling said it was Mr. Torn’s performance as Albert Brooks’s unconvincingly reassuring afterlife lawyer in the comedy “Defending Your Life” (1991) that won him his role on “The Larry Sanders Show.”

Among Mr. Torn’s better-known movies were two science-fiction hits. In the dark “The Man Who Fell to Earth” (1976), he was a cynical scientist who befriends the title character, a space alien played by David Bowie; in the lighthearted “Men in Black” (1997), he was the head of an organization supervising extraterrestrials who secretly live on Earth. (He reprised the role in the film’s 2002 sequel.) But he seemed to earn his best reviews and his most passionate audiences for films that were not hits.

“Payday” (1973), a road movie about a ruthless country singer, did not fare well at the box office but developed a cult following. His performance as an aging Memphis record producer in the 2005 drama “Forty Shades of Blue” was critically praised but also little seen. In his Times review of that film, A. O. Scott called Mr. Torn “a crafty and powerful actor” who was “easily the peer of Jack Nicholson or Tommy Lee Jones.”

Mr. Torn’s last screen roles included a lascivious Louis XV in Sofia Coppola’s “Marie Antoinette” (2006) and a blustery network chief, a character reminiscent of his Emmy-winning Artie, on the sitcom “30 Rock.” In 2016 he played the voice of a talking letter M wearing a top hat on the offbeat animated series “TripTank.”

Mr. Torn married the actress Ann Wedgeworth in 1955. In 1963, two years after he and Ms. Wedgeworth divorced, he married Ms. Page. They remained married until her death in 1987, but by then Mr. Torn had already begun a long-term relationship with the actress Amy Wright, who worked with Mr. Torn and Ms. Page’s Sanctuary Theater Workshop in New York.

In addition to Ms. Wright, Mr. Torn is survived by four daughters: Danae, from his first marriage, the actress Angelica Page, from his second, and Katie and Claire, from his relationship with Ms. Wright; two sons, Anthony and Jonathan, both from his second marriage; his sister, Patricia Alexander; and four grandchildren.

In a 1997 interview with The New York Times, Mr. Torn credited Geraldine Page with teaching him the secret of emotional health.

“I learned from Gerry that all you need is time on the stage,” he said. “No matter how I felt, no matter what anyone said about me, I always had the audience.”