Willis, the oldest of her famous mother’s three daughters, appeared on the talk show with Moore and sister Tallulah Willis. She told hosts Jada Pinkett Smith, Willow Smith and Adrienne Banfield-Jones why it was so hard to see her mother want to have kids again after raising her and her sisters with former husband Bruce Willis.

“With Ashton, I was so angry because I felt like something that was mine had been taken away,” Rumer confessed. “When she wanted to have another baby and then it wasn’t happening, and there was so much focus on that, it was like ‘Oh, well we’re not enough.’”

But Rumer acknowledged she didn’t quite understand the emotional pain of her mother’s miscarriage until she stumbled onto pictures of Moore pregnant.

“I think after you had a miscarriage, I literally was just like, ‘Why are you so desperate to have another kid?’ I couldn’t stand the idea,” Rumer said to her mom. “But then I found these pictures, and I was like, ‘Oh my god.’”

She added that she “saw how big her stomach was, and I was like, ’Oh my god, I was so insensitive. I never once went to you and said, ‘I’m so sorry,’ ‘Are you okay?’”

Moore wrote about the miscarriage, which happened six months into her pregnancy, in her book, “Inside Out.” She also spoke out the experience with The New York Times, saying she had planned to name the baby girl Chaplin Ray. 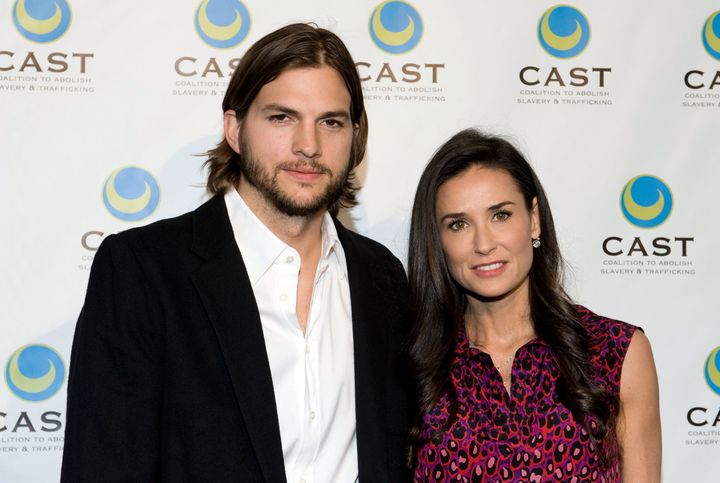 Kutcher has not commented on Moore’s book or her recent interviews in which she says that he was unfaithful and that the couple engaged in threesomes.

“I was about to push the button on a really snarky tweet. Then I saw my son, daughter, and wife and I deleted it,” the “That ’70s Show” actor tweeted in September.

Bruce Willis has been more supportive of his ex-wife.

“He called and he got very emotional,” Moore said on the podcast “Present Company with Krista Smith” in October. “He said, ‘I’m so proud of you.’”