Tell-alls about the Trump presidency include “Landslide,” “Betrayal” and “Nightmare Scenario,” “which is also how the former president describes having to read a book,” Colbert joked on Wednesday. 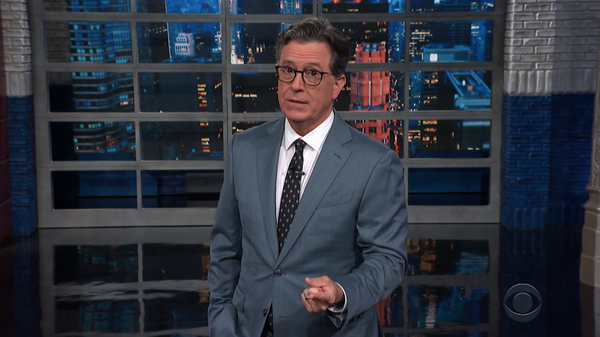 Welcome to Best of Late Night, a rundown of the previous night’s highlights that lets you sleep — and lets us get paid to watch comedy. Here are the 50 best movies on Netflix right now.

“We’re learning a lot of new details about the last days in office of former president, the Turd Reich,” Stephen Colbert joked on Wednesday of Donald J. Trump. Those books have names like “Landslide,” “Betrayal” and “Nightmare Scenario,” which Colbert said was “also how the former president describes having to read a book.”

“Other new books are using titles that are actually quotes of his, like ‘I Alone Can Fix It,’ and ‘Frankly, We Did Win This Election.’ Those, of course, join the ranks of other great titles, like ‘People Are Flushing Toilets 10 Times, 15 Times,’ ‘The Kidney Has a Very Special Place in the Heart,’ ‘Person, Woman, Man, Camera, TV: The Book,’ and, of course, ‘In Europe, They Live, Their Forest Cities. They Are Called Forest Cities, They Maintain Their Forests, They Manage Their Forests. I Was With the Head of a Major Country — It’s a Forest City.” — STEPHEN COLBERT

“The big bombshell from these books is an account of the infamous moment during the D.C. Black Lives Matter protest when the big strong law and order president hid in an underground bunker. The ex-president was so embarrassed when his little hidy-hole adventure was leaked that he reportedly said, ‘Whoever did that, they should be charged with treason,’ adding, ‘They should be executed.’ Careful, sir, if you start executing people for leaking, you’ll have to find a new lawyer.” — STEPHEN COLBERT

“In Trump’s defense, he didn’t want to stay in that bunker, but once he went down all those stairs, there’s no way he’s going back up.” — JIMMY FALLON

The Punchiest Punchlines (‘Good 4 You’ Edition)

“Vaccination rates are especially low among the younglings, so today pop star Olivia Rodrigo went to the White House to promote vaccines. Rodrigo told everyone who has already been vaxxed, ‘Good for you, you look happy and healthy.’ If you didn’t get that reference, I’m guessing you’ve been eligible for a vaccine since December.” — STEPHEN COLBERT

“There she is about to enter the same door used by historical figures like James Monroe, Abraham Lincoln and Kid Rock.” — STEPHEN COLBERT

The comedian Phoebe Robinson, who was the guest host on Wednesday’s “Jimmy Kimmel Live,” surprised the Scripps National Spelling Bee champion Zaila Avant-garde with an appearance from Bill Murray.

What We’re Excited About on Thursday Night

Jason Sudeikis and the creative team behind the Apple TV+ show, “Ted Lasso,” which returns for a second season on July 23, talk about its surprise success.